Application of theories of failure for thick walled pressure vessels.

Having discussed the stresses in thick walled cylinders it is important to consider their failure criterion. The five failure theories will be considered in this regard and the variation of wall thickness to internal radius ratio t/ri or radius ratio ro/ri with p/σyp for different failure theories would be discussed. A number of cases such as po =0, pi =0 or both non-zero po and pi are possible but here only the cylinders with closed ends and subjected to an internal pressure only will be considered, for an example.

theory According to this theory failure occurs when maximum principal stress exceeds the stress at the tensile yield point. The failure envelope according to this failure mode is shown in figure-9.3.1.1.1 and the failure criteria are given by σ1 = σ2 = ± σyp. If po =0 the maximum values of circumferential and radial stresses are given by

Here both σθ and σr are the principal stresses and σθ is larger. Thus the condition for failure is based on σθ and we have

where σyp is the yield stress. 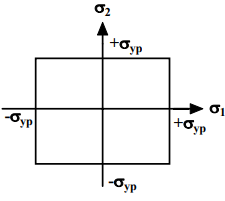 where the principal stresses σ1 and σ2 are given by

Here σ1 is tensile and σ2 is compressive in nature. τmax may therefore be given by 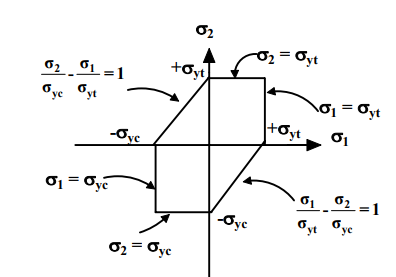 9.3.1.3 Maximum Principal Strain theoryAccording to this theory failure occurs when the maximum principal strain exceeds the strain at the tensile yield point.

where εyp and σyp are the yield strain and stress respectively. Following this the failure envelope is as shown in figure-9.3.1.3.1. Here the three principle stresses can be given as follows according to the standard 3D solutions:

The failure criterion may now be written as 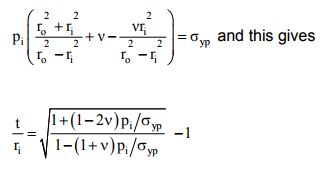 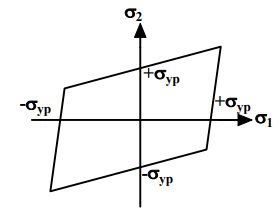 The failure criterion therefore reduces to 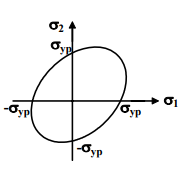 Plots of pi/σyp and t/ri for different failure criteria are shown in figure9.3.1.4.2. 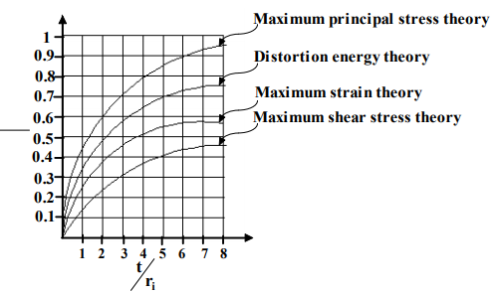 9.3.1.4.2F- Comparison of variation of against t/ri for different failure criterion.

pressure only or in case where both internal and external pressures exist may be developed. However, on the basis of these results we note that the rate of increase in pi/σyp is small at large values of t/ri for all the failure modes considered. This means that at higher values of pi small increase in pressure requires large increase in wall thickness. But since the stresses near the outer radius are small, material at the outer radius for very thick wall cylinders are ineffectively used. It is therefore necessary to select materials so that pi/σyp is reasonably small. When this is not possible prestressed cylinders may be used.

All the above theories of failure are based on the prediction of the beginning of inelastic deformation and these are strictly applicable for ductile materials under static loading. Maximum principal stress theory is widely used for brittle materials which normally fail by brittle fracture.

In some applications of thick cylinders such as, gun barrels no inelastic deformation can be permitted for proper functioning and there design based on maximum shear stress theory or maximum distortion energy theory are acceptable. For some pressure vessels a satisfactory function is maintained until inelastic deformation that starts from the inner radius and spreads completely through the wall of the cylinder. Under such circumstances none of the failure theories would work satisfactorily and the procedure discussed in section lesson 9.2 is to be used.

Failure criteria based on the three methods of pre-stressing would now be discussed. The radial and circumferential stresses developed during shrinking a hollow cylinder over the main cylinder are shown in figure9.3.1.5.1. 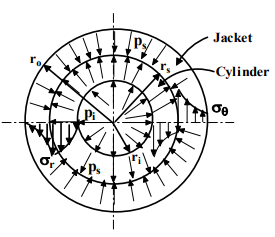 9.3.1.5.1F- Distribution of radial and circumferential stresses in a composite thick walled cylinder subjected to an internal pressure.

Following the analysis in section 9.2 the maximum initial (residual) circumferential stress at the inner radius of the cylinder due to the contact pressure ps is 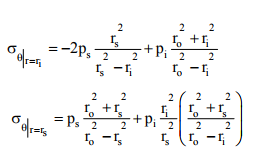 It was shown in section-9.2 that the contact pressure ps is given by 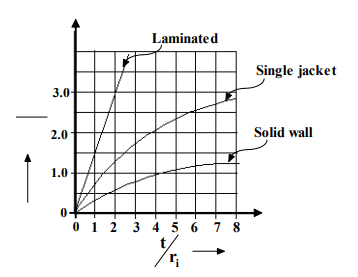