This shows that even with a single jacket there is a considerable reduction in wall thickness and thus it contributes to an economic design. As discussed earlier autofrettage causes yielding to start at the inner bore and with the increase in pressure it spreads outwards. If now the pressure is released the outer elastic layer exerts radial compressive pressure on the inner portion and this in turn causes radial compressive stress near the inner portion and tensile stress at the outer portion. For a given fluid pressure during autofrettage a given amount of inelastic deformation is produced and therefore in service the same fluid pressure may be used without causing any additional elastic deformation.

The self hooping effect reaches its maximum value when yielding just begins to spread to the outer wall. Under this condition the cylinder is said to have reached a fully plastic condition and the corresponding internal fluid pressure is known as fully plastic pressure, say, pf . This pressure may be found by using the reduced equilibrium equation (3) in section- 9.2.1 which is reproduced here for convenience

Another equation may be obtained by considering that when the maximum shear stress at a point on the cylinder wall reaches shear yield value τyp it remains constant even after further yielding. This is given by

and on integration we have

Since the basic equations are independent of whether the cylinders are open or closed ends, the expressions for σr and σθ apply to both the conditions. The stress distributions are shown in figure- 9.3.1.5.3. 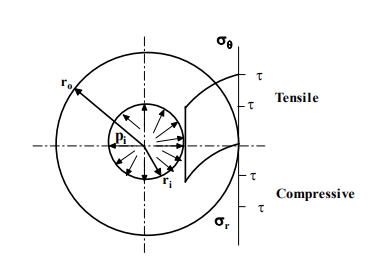 9.3.1.5.3F- Stress distribution in a thick walled cylinder with autofrettage If we roughly assume that 2τyp = σyp we have

The results of maximum principal stress theory and maximum shear stress theory along with the fully plastic results are replotted in figure 9.3.1.5.4 where we may compare the relative merits of different failure criteria. It can be seen that cylinders with autofrettage may endure large internal pressure at relatively low wall thickness. 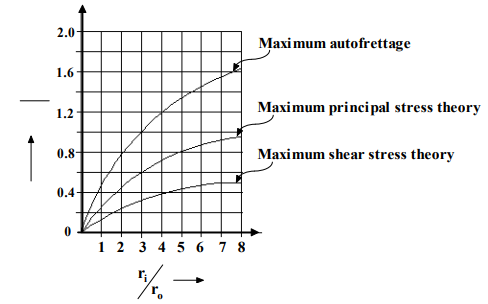 Finally it must be remembered that for true pressure vessel design it is essential to consult Boiler Codes for more complete information and guidelines. Pressure vessels can be extremely dangerous even at relatively low pressure and therefore the methodology stated here is a rough guide and should not be considered to be a complete design methodology.