Consider a bracket fixed to the wall by means of three rows of screws having two in each row as shown in figure 11.1.1. An eccentric load F is applied to the extreme end of the bracket. The horizontal component, Fh, causes direct tension in the screws but the vertical component, Fv, is responsible for turning the bracket about the lowermost point in left (say point O), which in an indirect way introduces tension in the screws. 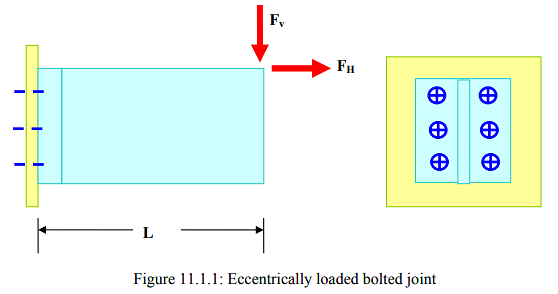 It is easy to note that the tension in the screws cannot be obtained by equations of statics alone. Hence, additional equations must be formed to solve for the unknowns for this statically indeterminate problem. Since there is a tendency for the bracket to rotate about point O then, assuming the bracket to be rigid, the following equations are easily obtained.

where yi =elongation of the i-th bolt

li=distance of the axis of the i-th bolt from point O.

If the bolts are made of same material and have same dimension, then

where fi =force in the i-th bolt

k =stiffness of the bolts 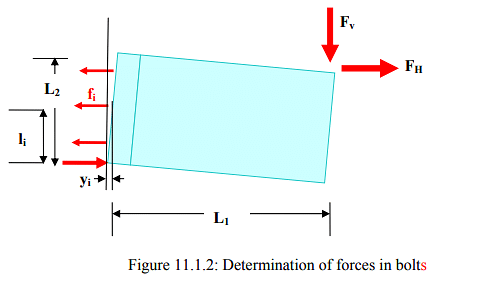 Using the moment balance equations about O, the lowermost point in the left side, the following equation is obtained.

Thus the force in the i-th screw is

For safe design of the joint it is therefore required that

where St =allowable tensile stress of the bolt.

Note that Fvcauses also direct shear in the bolt. Its effect may be ignored for a preliminary design calculation.

Consider, now, a bracket, which carries a vertical load F . The bracket, in this case, is connected to the wall by four rivets as shown in figure 11.1.2. The force, 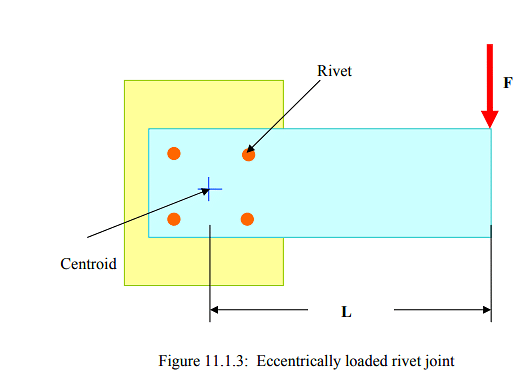 Once again, the problem is a statically indeterminate one and additional assumptions are required. These are as following:

(i) magnitude of additional shear force is proportional to the distance between the rivet center and the centroid of the rivet assembly, whose coordinates are defined as

(ii) directions of the force is perpendicular to the line joining centroid of the rivet group and the rivet center and the sense is governed by the rotation of the bracket.

Noting that for identical rivets the centroid is the geometric center of the rectangle, the force in the i-th rivet is

li=distance of the i-th rivet from centroid.

Taking moment about the centroid

Thus, the additional force is 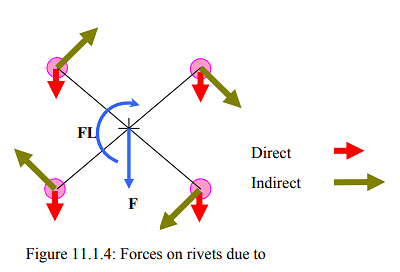 where θ i =angle between the lines of action of the forces shown in the figure.

For safe designing we must have

where ss  =allowable shear stress of the rivet.