Logic gates sometimes have different logical efforts for different inputs. We call such gates asymmetric. Asymmetric gates can speed up critical paths in a network by reducing the logical effort along the critical paths. This attractive property has a price, however the total logical effort of the logic gate increases. This lecture discusses design issues arising from biasing a gate to favor particular inputs. 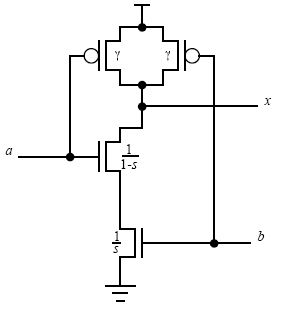 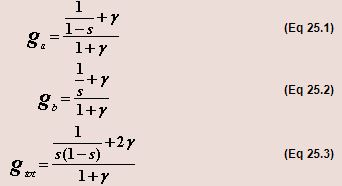 ,  or almost exactly 1. The logical effort of input b becomes

Extremely asymmetric designs, such as with s=0.1, are able to achieve a logical effort for one input that almost matches that of an inverter, namely 1. The price of this achievement is an enormous total logical effort, 35, as opposed to 8/3 for a symmetric design. Moreover, the huge size of the pull-down transistor will certainly cause layout problems, and the benefit of the reduced logical effort on input a may not be worth the enormous area of this transistor.

Less extreme asymmetry is more practical. If s=1/4, the pull-down transistors have widths 4/3 and 4, and the logical effort of input a is

The principal application of asymmetric logic gates occurs when one path must be very fast. For example, in a ripple carry adder or counter, the carry path must be fast. The best design uses an asymmetric circuit that speeds the carry even though it retards the sum output.

Paradoxically, another important use of asymmetric logic gates occurs when a signal path may be unusually slow, as in a reset signal. Figure 25.21 shows a design for a buffer amplifier whose output is forced LOW, when the reset signal,

, is LOW. The buffer consists of two stages: a NAND gate and an inverter. During normal operation, when

is HIGH, the first stage has an output drive equivalent to that of an inverter with pull-down width 6 and pull-up width 12, but the capacitive load on the in input is slightly larger than that of the corresponding inverter: 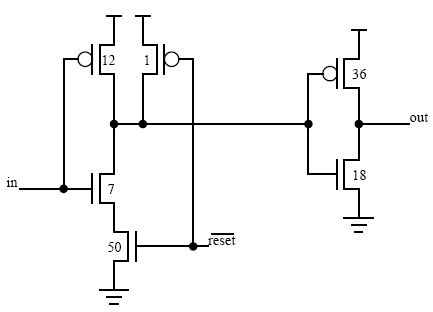 Fig 25.21: A buffer amplifier with a reset input. When

is LOW, the output will always be LOW.

This circuit takes advantage of slow response allowed to changes on

by using the smallest pull-up transistor possible. This choice reduces the area required to lay out the gate, partially compensating for the large area pull-down transistor. Area can be further reduced by sharing the the reset pull-down among multiple gates that switch at different times; this is known as Virtual Ground technique.

We can model the delay of an individual stage of logic with one of the following two expressions:

where the delays are measured in terms of ζ. Notice that the logical efforts, parasitic delays, and stage delays differ for rising transitions (u) and falling transitions (d).

In path containing N logic gates, we use one of two equations for the path delays, depending on whether the final output of the path rises or falls. In the equations, i is the distance from the last stage, ranging from 0 for the final gate, to (N-1) for the first gate.

A reasonable goal is to minimize the average delay:

Then we have for the average delay:

The rising logical effort is 3 times greater,  gu = 4/3, because the current produced on a rising transition is only 1/3rd that of a falling transition. The average logical effort is  g = (4/9+4/3)/2 = 8/9.  This is independent of the number of inputs, explaining why pseudo-NMOS is a way to build fast, wide NOR gates.

Table 25.41 shows the rising, falling and average logical efforts of other pseudo-NMOS gates, assuming μ = 2 and a 4:1 pull-down to pull-up strength ratio. 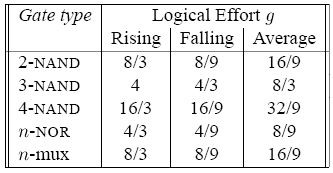