The document Detailed Chapter Notes - Atoms and Molecules, Class 9, Science | EduRev Notes is a part of Class 9 category.
All you need of Class 9 at this link: Class 9

The structure of matter has been a subject of speculation from very early times. According to greek philosopher Aemocritus, if we go on dividing matter into smaller parts, a stage would be reached when particles obtained cannot be divided further. He called these particles 'atoms' meaning indivisible. By studying the result of quantitative measurement of many reactions it was observed that whenever substances react, they follow certain laws. These laws are called the law of chemical combination.

(a) Law of conservation of mass.

(b) Law of constant proportions.

(d) Law of conservation of mass ;

This law was given by the french chemist A. Lavoisier in 1774. This law states that in every chemical reaction, the total mass before and after the reaction remains constant. 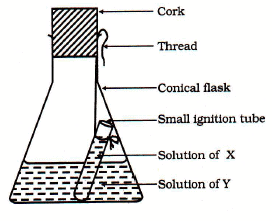 Activity : Demonstration of law of conservation of mass.

This activity can also be carried out with the following pairs :

(a) Silver nitrate and sodium chloride

(b) Copper sulphate and sodium carbonate

This law was given by the french chemist A. Levoisier and Joseph Proust. This law deals with the composition of chemical compounds.

This law is : A pure chemical compound always contains same elements combined together in same proportion by mass.

Ex. Hydrogen and oxygen combine in the ratio of 1 : 8 by mass to form water. What weight of oxygen gas would be required to completely react with 3 g of hydrogen gas.

Sol. Ratio in which hydrogen and oxygen combine = 1 : 8

It was given by Dalton in 1808. According to it, when one element combines with the other element to form two or more different compounds, the mass of one element, which combines with a constant mass of the other, bear a simple ratio to one another. Example : Carbon and oxygen when combine, can from two oxides that are CO (carbon monoxide), CO2 (carbon dioxide).

On the basis of laws of chemical combination John Dalton proposed atomic theory in 1808. The main points of dalton's atomic theory are :

The main postulates of the Dalton's atomic theory are :

Dalton's atomic theory was based on the laws of chemical combination.

Some of the drawbacks of the Dalton's atomic theory of matter are given below :

All the matter is made up of atoms. An atom is the smallest particles of an element that can take part in a chemical reaction. Atoms of most of the elements are very reactive and do not exist in the free state (as single atom). They exist in combination with the atoms of the same elements or another element. Atoms are very small in size. The size of an atom is indicated by its radius which is called atomic radius (radius of an atom). Atomic radius is measured in nanometre (nm) (1 metre = 109 nanometres or 1nm = 10_9m). Hydrogen atoms is the smallest atom of all, having an atomic radius of 0.037nm. Atoms are so small that we cannot see them under the most powerful optical microscope. first letter of the name of that element.

How do Atoms occur :

A molecule is the smallest particle of an element or compound that has independent existence. A molecule contain one or more than one atoms.

The molecules of elements contain atoms of only one kind.

The number of atoms in a molecule of an element is known as atomicity of the element. For example -The atomicity of the noble gases is 1, that of hydrogen, nitrogen, oxygen etc. is 2 each and of ozone is 3. Thus, noble gases, hydrogen and ozone are respectively monoatomic, diatomic and triatomic molecules.

The molecules of an element contain two similar atom chemically bonded together, for example ozone gas has 3 oxygen atoms combined together , so ozone exists in the form of O3. A recently discovered form of carbon, called Buckminster fullerene has molecular formula C60.

The molecular mass of a substance (an element or a compound) may be defined as the average relative mass of a molecule of the substance as compared with mass of an atom of carbon (C-12 isotope) taken as 12 amu.

Formula mass of an ionic compound is obtained by adding atomic masses of all the atoms in a formula unit of the compound.

Example : Water is a compound whose one molecule is made up of two atoms of hydrogen and one atom of oxygen and hence its chemical formula is H2O.

The prefixes are needed in naming those binary compounds in which the two non-metals form more than one compounds (by having different number of atoms).

l But, if two non-metals form only one compound, then prefixes are not used in naming such compounds.

Example : Hydrogen and sulphur combine to form only one compound H2S, So, H2S is named as hydrogen sulphide and not hydrogen monosulphide.

Ions : An ion is a positively or negatively charged atom (or group of atoms)

These are two type of ions :

For example : sodium atom, loses one electron to form a sodium ion Na

An anions is formed by the gain of one or more electrons by an atom. For example a chlorine atom gains one electron to form a chloride ion Cl-.

Valency of ions : The valency of an ion is same as the Charge present on the ion.

Writing of formula of Molecular compound :

Steps : . The steps to be followed for writing the formula of molecular compound are-

Example : To work out the formula of hydrogen sulphide

Writing the formula of Ionic compound :

Example : To write the formula for sodium carbonate.

(1) First, write the symbol of sodium ion and carbonate ion and write their valencies below their symbols are shown.

(2) Now, we exchange the valencies of sodium ion and carbonate ion,

Moles of Atoms : One mole of atoms of an element has a mass equal to the gram atomic mass of the element.

1 mole of atoms of an element = Gram atomic mass of the element. 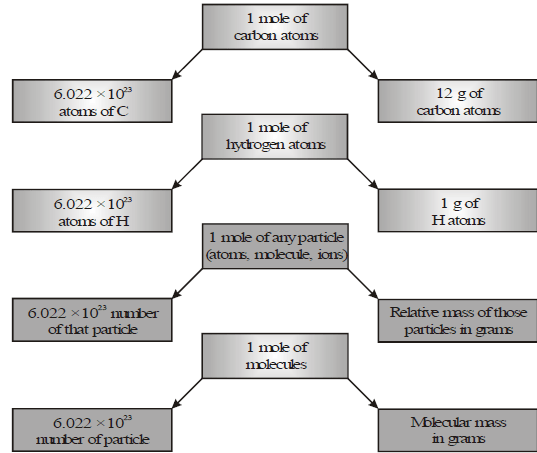 Mass percentage of an element from molecular formula :

The molecular formula of a compound may be defined as the formula which specifies the number of atoms of various element in the molecule of the compound.

Steps for writing an empirical formula :

Steps for writing the molecular formula :