a) Prison in Guantanamo Bay:

Families of the prisoners, media or even UN representatives have not been allowed to meet them. There has been no trial before any magistrate in the USA nor have the prisoners been allowed to approach the courts in their own country.Amnesty international reported that the prisoners were being tortured in ways that violated the US laws. They were being denied the treatment that even prisoners of war must get as per international treaties. Prisoners were not released even after they were officially declared not guilty. The UN Secretary General said the prison in Guantanamo Bay should be closed down. The US government refused to accept these pleas.

b) Citizens’ Rights in Saudi Arabia:

RIGHT IN A DEMOCRACYa) What are Rights?

b) Rights are reasonable claims of persons, recognised by society and sanctioned by law. Why do we need Rights in a Democracy?

RIGHTS IN THE INDIAN CONSTITUTIONIn India, like most other democracies in the world, these rights are mentioned in the Constitution. Some rights which are fundamental to our life are given a special status. They are called Fundamental Rights. The preamble of our Constitution talks about 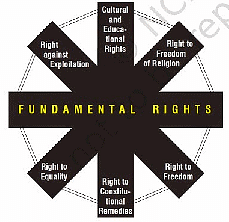 securing for all its citizens equality, and justice. Fundamental Rights put this promise into effect. They are an important basic feature of India’s Constitution.

In addition, the Parliament has enacted a law giving the right to information to the citizens.

Restriction to the Right to Freedom:The restrictions are as follows:

Recently, the Supreme Court has expanded the meaning of the right to life to include the right to food. All these rights are given to the citizens to ensure that the government cannot oppress them unjustly or take away their liberty.

Preventive Detention:if a person is seen to be a threat to law or unity and integrity of the country, the government can detain such person to prevent any damage. this is called Preventive Detention. But preventive detention can extend only for three months. The period can be extended by an advisory board. At the end of this period, the person should either be brought for trial before a Court or released.

Right to Freedom of Religion:Our Constitution gives the right to practice any religion to all citizens. Accordingly,

Cultural and educational rights:India is a country many religion, languages and cultures. The Constitution helps them in preserving and developing their own identity.(i) All sections of people having their distinct culture, language and script have full freedom to protect the same.(ii) All minorities have the right to establish and administer educational institutions of their choice.

How can we secure these Rights?The Constitution provides that the Courts have a duty to protect citizens ‘tights.

Different types of writs.An order issued by a court to the government is called a writ. some of the important types of writs are as follows:(i) Habeas Corpus: The Court can order the government to produce before it a detained person, so that it can know the reason for detention and set him free if there is no legal justification for the detention.(ii) Mandamus: The court may issue a command to any public or quasi- public legal body which has refused to perform its legal duty.(iii) Quo Warranto: It is issued by a Court to a public servant to inquire into the legality of his holding a public office and to remove him if his claim is not well-founded.(iv) Prohibition: It is issued by a Higher Court to stop the proceedings in a lower Court on the ground that the Lower Court does not have the jurisdiction to deal with  the case.(v) Certiorari: It is issued by the Supreme court to a Lower Court in order to quash its order or decision.

EXPANDING SOURCE OF RIGHTSWhile fundamental rights are the source of all rights, OUR Constitution and offers a wider range of rights. Over the years the scope of rights has expanded.(a) Expansion in the Legal Rights:(i) Now school educational has become a right for Indian citizens. The governments are responsible for providing free and compulsory education to all children up to the age of 14 years.(ii) Parliament has enacted a law giving the right to information to the citizens. This Act was made under the Fundamental Rights to freedom of thought and expression.(iii) Recently the Supreme Court has expanded the meaning of the right to life to include the right to food.(iv) Constitution provides many more rights, which may not be Fundamental Rights. For example the right to property is not a Fundamental Right but it is a constitutional right. right to vote in elections is an important constitutional right.

(b)  Expansion in the Human Rights:International Covenant recognises many rights that are not directly a part of the Fundamental Rights in the Indian Constitution. this has not yet become an international treaty. but human right  activists all over the world see this as a standard of human rights. These include:(i) Right to work, an opportunity to everyone to earn livelihood by working.(ii) Right to safe and healthy working conditions, fair wages that can provide decent standard of living for the workers and their families.(iii) Right to adequate standard of living including adequate food, clothing and housing.(iv) Right to social security and insurance.(v) Right to health which provides medical care during illness, special care for women during childbirth and prevention of epidemics.(vi) Right to education provides which provides free and compulsory primary education and equal access to higher education.

(c) Constitution of South Africa guarantees its citizens several kinds of new rights:(i) Right to privacy, so that citizens or their homes cannot be searched, their phones cannot be tapped, their communication cannot be opened.(ii) Right to an environment that is not harmful to their health or well-being.(iii) Right to have access to adequate housing.(iv) Right to have access to health care services, sufficient food and water; no one may be refused emergency medical treatment.

Our Constitution states the following as Fundamental Duties of citizens:

DIRECTIVE PRINCIPLES OF STATE POLICYThe Directive Principles of State Policy are the directions given by the Constitution to government to establish a just society. The aim of these directions is to create proper economic and social conditions to create a good life.The Directive Principles of State Policy can be classified as follows:

In the case of conflict between the Fundamental Rights and Directive Principles the former enjoy precedence.

NATIONAL HUMAN RIGHTS COMMISSIONNational Human Right Commission (NHRC) IS an independent commission. It was setup in 1993. The NHRC performs the following functions:(i) It can make an independent and credible inquiry into any case of violation of human rights.(ii) It can inquiry into any case of abetment of such violation or negligence in controlling it by any government officer.(iii) It can take any step of promote human rights in the country. The Commission has ranging powers to carry out it’s inquiry:(iv) It can summon witnesses.(v) It can  question any government official.(vi) It can  demand any official paper.(vii) It can visit any prison for send its own team for on-the spot inquiry.