Biodiversity refers to all the diverse plants, animals and micro organisms present on earth.

Biological diversity or biodiversity is the occurrence of diverse or varied forms of living beings which differ from one another in external appearance, size, colour pattern, internal structure, nutrition, behaviour, habitat, etc.

They range in size from microscopic bacteria, hardly a few micrometers in size, to Blue Whale (about 30 m in length) and Redwood trees (Sequoia) of California (about 100 m in height). Similarly some pine trees (e.g. Pinus) live for thousands of years while many insects like mosquitoes have a life span of a few days. There are transparent jelly fishes and worms on one hand to brightly coloured birds and flowers on the other hand.

It is estimated that there are at least 10 million different species of plants and animals living today, but only 1.7 million have been described so far worldwide. 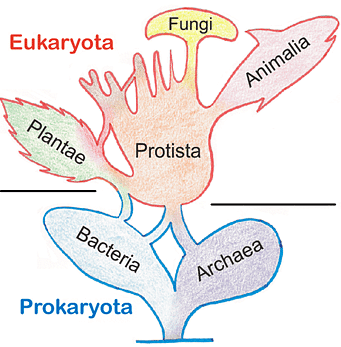 There are 12 megadiversity centres in the world, which are rich in biodiversity.

Classification is the arrangement of organisms into groups and subgroups on the basis of their similarities and dissimilarities.

Classification makes the study of different type of organisms easy and systematic.

From classifiction, we can know all life forms together and as a whole.

Classification reveals the inter-relationship among organisms.

It helps in understanding the other branches of life sciences.

Hierarchy :- Hierachy is a system of classification into which taxonomic categories are arranged in descending order.

Category :- Plants and animals are ranked in an arrangement of known categories. Such as Kingdom, Phylum (for animals) or Division (for plants), Class, Order, Family, Genus and Species.

Phylum (for animals) / Division (for plants) 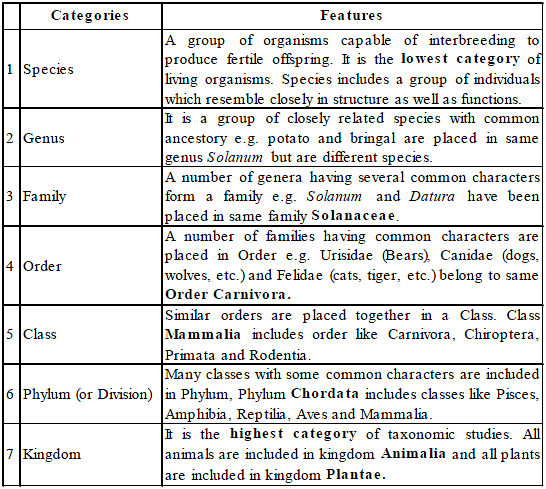 Charles Darwin first described the idea of evolution in 1859 in his book, "The Origin of Species".

Darwin suggested that organisms are related to each other by descent. They had common ancestors from which they gradually evolved into their present form.

The ancestral forms were simple and are called 'primitive' and primitive organisms have evolved into advanced orgamisms which are more complex.

This process of gradual change from simple life forms to complex life forms is called 'Evolution'.

Nomenclature : (The naming of organisms)

Binomial Nomenclature : Binomial nomenclature was proposed by Carolus Linnaeus. According to his the name of any organism consists of two words.

First letter of generic name must be written in capital lettter whereas species name is started with small letter.

Scientific name is generally derived from Greek or Latin words.

The binomial names are printed in italics and underlined separately when written.

First suggested by Carolus Linnaeus in 1758.

Living organisms have been divided into two kingdoms.

Certain organisms did not strictly fit either under plant or animal kingdom like :Euglena and Viruses.

This concept was propounded by Robert H. Whittaker in 1969. 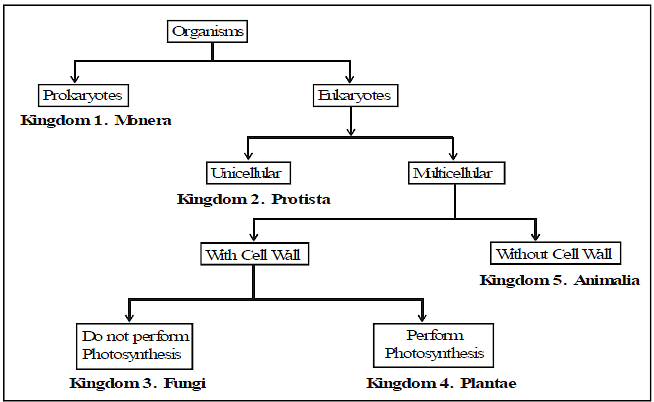 Carl Woese (1977, 1994) has divided the kingdom monera into archaebacteria (= archea) and eubacteria (or bacteria). All other kingdom are included in his superkingdom of eukarya.

Prokaryotic Nature : The genetic material is not organised into a nucleus. It lies directly inside the cytoplasm and is called nucleoid.

In filaments and colonies the cells are similar and independent.

Mode of nutrition is either autotrophic (Blue-green algae) or heterotrophic(Mycoplasma and most bacteria).

There is a true nucleus and membrane bound other cell organelles.

Cell wall : Some protists are covered with cell wall (most photosynthetic protists) while others do not possess it (e.g., protozoan protists).

Mode of nutrition is either autotrophic (algae and diatomes) or heterotrophic(protozoans).

Sexual reporduction is present but an embryo stage is absent. 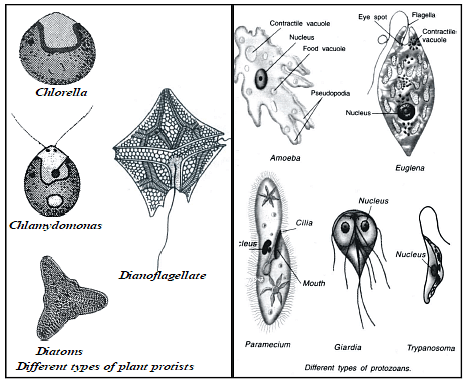 These are non-green (lacking chlorophyll)eukaryotic, organisms.

They may be unicelluar (e.g. Yeast) or Multicellular (most fungi).

The body of a multicellular and filamentous fungus is called mycelium and is composed of several thread like structures termed as hyphae.

Heterotrophic mode of nutrition is found.

Food is gained by either saprophytically (from dead organic matter) or parasitically (from other living tissues). 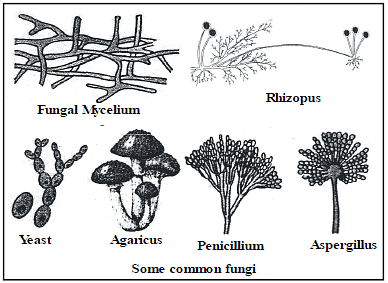 They are autotrophs i.e. prepare own food by photosynthesis.

Plastids are found in all plants. Some plastids posses photosynthesis pigment. They are called chloroplasts.

Plants are autotrophic in nature because they are able to perform photosynthesis with the help of chlorophyll present in chloroplasts.

On the basis of differentiation of plant body.

On the basis of conducting tissue.

On the basis of ability to bear seeds and seed are enclosed within fruits.

Plant body is not differentiated into root, stem and leaves, called thallus.

These are found in marine, fresh water and moist land.

They have not mechanical and conducting tissue. 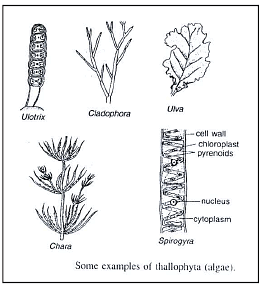 Bryophytes are also known as amphibians of plant kingdom.

These are the simplest and the most primitive land plant.

They have flat plant body which differentiate in to stem and leaf like structure.

Main plant body is gametophyte which attach to substratum by means of rhizoids. 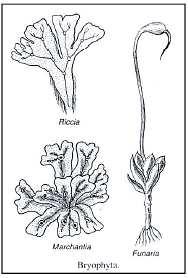 Main plant body is sporophyte which is differentiated into root, stem and leaves.

Vascular tissues, xylem and phloem, appear for the first time in pteridophyta.

They produces spores inside sporangia.

Gametophyte is a small but independent stage in life cycle.

Sex Organs are multicellular and jecketed like those of bryophytes male antheridia, female archegonia. 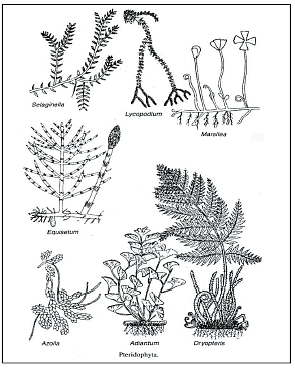 Characteristics : Main plant body is a sporophyte which is differentiated into stem, leaves and roots.

Vascular tissues are well-developed throughout the plant body.

Male and female gametophytes are distinct. They are small and dependent on the sporophyte for their nutrition.

Male gametophytes or pollen grains reach near the female sex organs through an external agency of wind, water or animals. The process is called pollination. Fertilization occurs with the help of a pollen tube. An external water is not required.

After fertilization plants produce seeds which contains embryo along with stored food. On germination each seed forms a new plant.

Spermatophyta or phanerogams are classified into two groups (Gymnosperm, Angiosperm) on the basis of naked or enclosed seeds.

Plants are evergreen, woody and perennial. They are trees and shrubs.

Sporophylls are aggregated to form cones. There are separate male and female cones.

They bear naked seed. The seeds are not enclosed inside fruits. Instead they lie exposed over the megasporophylls. 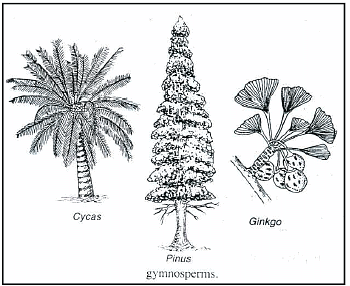 These are called flowering plant. Sporophylls are aggregated to form flowers. Flowers may be unisexual or bisexual.

The plants of this group produce seeds inside an organ called ovary, which is modified in to fruit.

Endosperm is a new food storing structure which is generally triploid and is formed by fusion of three nuclei (triple fusion).

Cotyledons represent a bit of pre-designed plant in the seed. 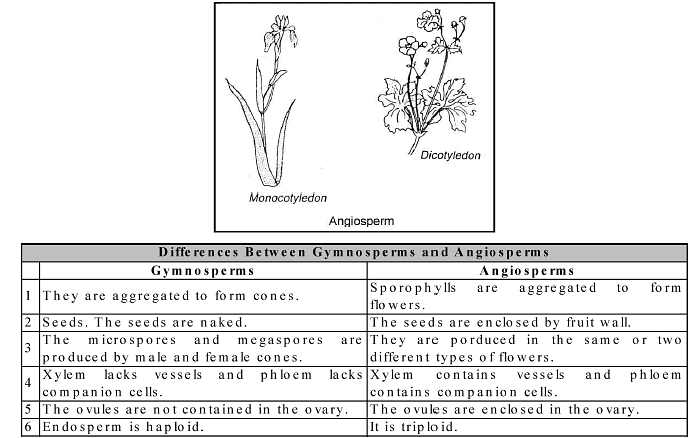 In angiosperms, a seed may have one or two cotyledons. On the basis of cotyledon number, angiosperms have been divided into two classes, dicotyledoneae and monocotyledoneae.

It is a class of angiosperms in which seeds possess tow cotyledons. The plants of this class are commonly called dicots or dicotyledonous plants. Some other characters are reticulate venation, tap root system, pentamerous or tetramerous flowers. eg. Gram, Pea, Mustard, Ipomoea.

The members of class monocotyledoneae of angiosperms are characterised by the occurrence of a single cotyledon in their seeds. They are commonly called monocots or monocotyledonous plants. Other characters of monocots are parallel venation, fibrous root system, trimerous flowers. eg. Lily, Coconut, Wheat, Maize, Grass, Bamboo, Paphiopedilum.

The document Detailed Chapter Notes - Diversity in living organisms, Class 9, Science Notes - Class 9 is a part of Class 9 category.
All you need of Class 9 at this link: Class 9