The term drainage describes the river system of an area.

The area drained by a single river system is called a drainage basin. Any elevated area, such as a mountain or an upland that separates two drainage basins is known as a water divide.

The streams within a drainage basin form certain patterns, depending on the slope of the land, underlying rock structure as well as the climatic conditions of the area. These are dendritic, trellis, rectangular, and radial patterns.

A combination of several patterns may be found in the same drainage basin. 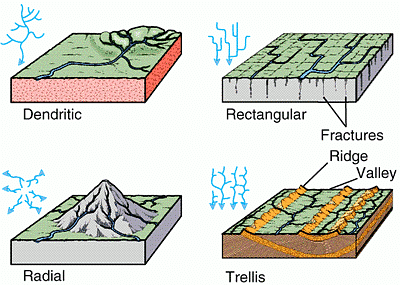 Dendritic drainage pattern.
In a dendritic system, there are many contributing streams (analogous to the twigs of a tree), which are then joined together into the tributaries of the main river (the branches and the trunk of the tree, respectively). They develop where the river channel follows the slope of the terrain.

The Drainage systems of India are mainly controlled by the broad relief features of the subcontinent. accordingly, the Indian rivers are divided into two major groups: 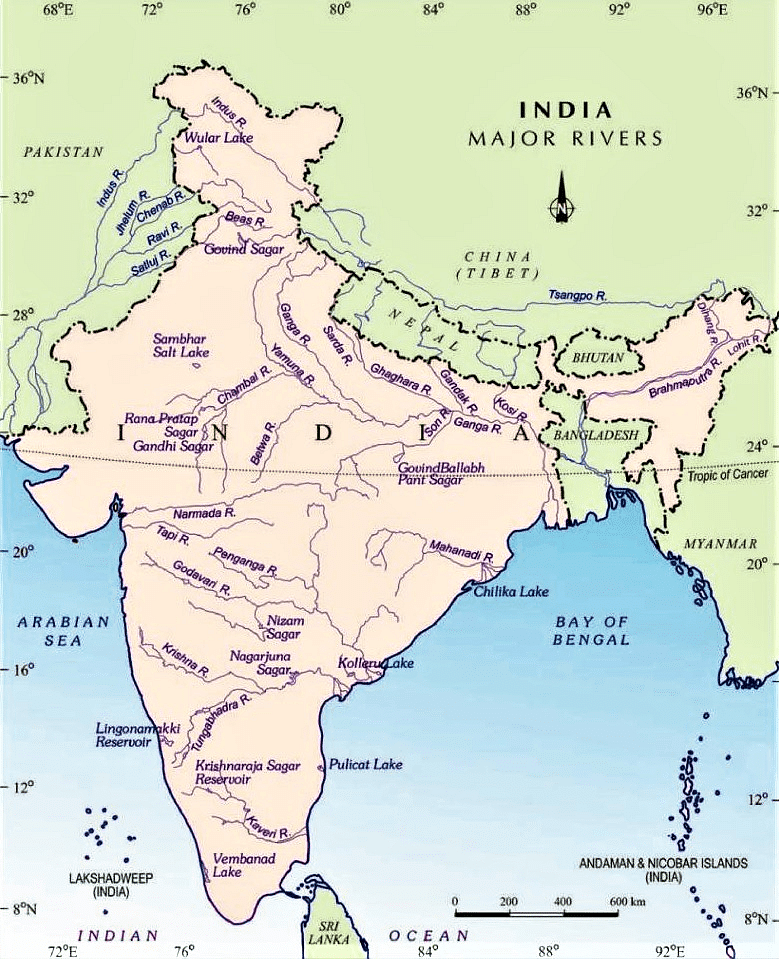 The major Himalayan Rivers are the Indus, the Ganga and the Brahmaputra. These rivers are long and are joined by many large and important tributaries.

The river Indus rises in Tibet, near Lake Mansarovar. Flowing west, it enters India in the Ladakh district of Jammu and Kashmir. Several tributaries, the Zaskar, the Nubra, the Shyok and the Hunza, Join it in the Kashmir region. The Indus flows through Baltistan and Gilgit and emerges from the mountains at Attock. The  Satluj, the Beas, the Ravi, the Chenab and the Jhelum join together to enter the Indus near Mithankot in Pakistan. Beyond this, the Indus flows southwards eventually reaching the Arabian Sea, east of Karachi. The Indus plain has a very gentle slope. With a total length of 2900 km, the Indus is one of the longest rivers in the world. a little over a third of the Indus basin is located in India in the states of Jammu and Kashmir, Himachal Pradesh and Punjab and the rest are in Pakistan. 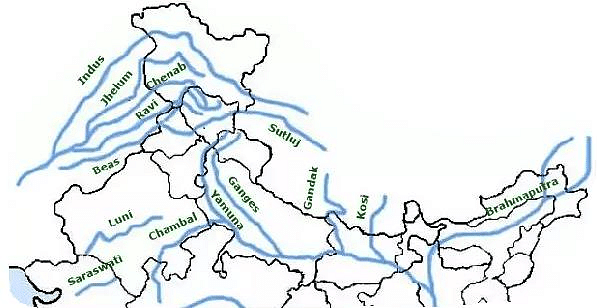 Ambala is the city located on the water divide between Indus and Ganga river systems. Any elevated area, such as a mountain or upland, separates two drainage basins. Such upland is known as water divide.

The Peninsular drainage system is older than the Himalayan one. This is evident from the broad, largely-graded shallow valleys, and the maturity of the rivers. Peninsular rivers are characterized by fixed course, absence of meanders, small drainage basins and non-perennial flow of water. The main water divide in peninsular Indian is formed by the Western Ghats. Most of the major rivers of the Peninsula flow eastwards and drain into the Bay of Bengal. The Narmada and the Tapi which flow through the rift valley are exceptions.

The Tapi originates from the Satpura ranges in the Betul district of Madhya Pradesh. nearly 79 per cent of its basin lies in Maharashtra, 15 per cent in Madhya Pradesh and the remaining 6 per cent in Gujarat. The Tapi flows in a rift valley parallel to the Narmada but it is much shorter in length. 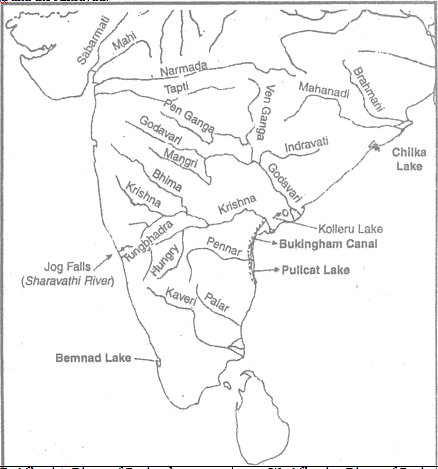 Role of Rivers in the Economy

Rapidly growing domestic, Municipal, industrial and agricultural demand for water from rivers naturally affects the quality of water. Today more and more water is drained out of the rivers. It has resulted in reducing their volume. A heavy load of untreated sewage and industrial effluents is emptied into the rivers.