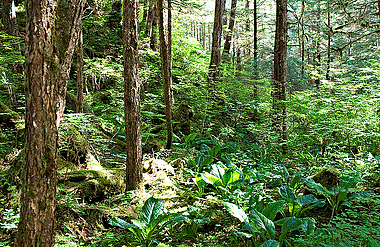 The disappearance of forests is referred to as deforestation .deforestation is not a recent problem. The process began many centuries ago, but under colonial rule, it became more systematic and extensive.

Land to be Improved

Sleepers on the Tracks

Large areas of natural forests were also cleared to make way for tea, coffee and rubber plantations to meet Europe’s growing need for these commodities. The colonial government took over the forests and gave vast areas to European planters at cheap rates. These areas were enclosed and cleared of forests, and planted with tea or coffee.

The Rise of Commercial Forestry

In India, colonial rulers needed huge supplies of wood for railways and ships. This led to widespread deforestation. The British government got alarmed. The government invite Dietrich Brand is a German expert on forests, for advice, he was appointed as the first Inspector General of Forests in India. The brand is emphasized that rules need to be framed about the use of forest wealth. The brand is realized that a proper system had to be introduced to manage the forests and people had to be the science of conservation. This system needed legal sanction. It was at his initiatives that;

The 1878 Act divided forests into three categories: reserved, protected and village forests. The best forests were called ‘reserved forestry’. Villagers could not take anything from these forests, even for their own use. For house building or fuel, they could take wood from protected or village forests.

Try yourself:Indian Forest Service was set up in the year….?
Explanation

Dietrich Brandis, a German expert became the firsInspector General of Forests in India. Brandis set up the Indian Forest Service in 1864.

How were the Lives of People Affected?

The Forest Act meant severe hardship for villagers across the country. After the Act all their everyday practice - cutting wood for their houses, grazing their cattle, collecting fruits and roots, hunting and fishing n- became illegal. People were now forced to steal wood from the forests, and if they were caught, they were at the mercy of the forest guards who would take bribes from them. Women who collected fuelwood were especially worried. It was also common for police constables and forest guards to harass people by demanding free food from them.

How did Forest Rules Affect Cultivation?

The colonial government banned this practise of shifting cultivation. They felt that land which was used for cultivation every few years could not grow trees for railway timber.

New opportunities opened up in trade. In India, forest trade was not new. It existed from the medieval period, where Adivasi communities used to trade elephants and other goods like hides, horns, silk cocoons, ivory, bamboo, spices, fibres, grasses, gums and resins through nomadic communities like the Banjaras. But, trade was completely regulated by the government, which gave many large European trading firms the sole right to trade in the forest products of particular areas. New opportunities for work did not improve the well-being of the people.

Rebellion in the Forest

Forest communities rebelled against the changes that were being imposed on them. Some of the leaders of these movements are the Siddhu and Kanu in the Santhal Parganas, Birsa Munda of Chhotanagpur or Alluri Sitarama Raju of Andhra Pradesh.

The People of Bastar

The Fears of the People

In 1905, the colonial government proposed to reserve two-thirds of the forest and stop shifting cultivation, hunting and collection of forest produce. Some people used to stay in forests by working free for the forest department and these are called forest villagers. Villagers for the long run suffered from increased land rents and frequent demands of labour and goods. People started discussing these issues in their village councils, bazaars, and art festivals. Dhurwas of the Kanger forest took initiative where reservation first took place. Bazaars were looted, the houses of officials and traders, schools and police stations were burnt and robbed, and grain redistributed. British troops were sent to suppress the rebellion. After Independence, the same practice of keeping people out of the forests and preserving them for industrial use continued.

Java is famous as a rice-producing island in Indonesia. But, there was a time when it was covered mostly with forests. In Java, the Dutch started forest management. Villages existed in the fertile plains, and there were also many communities living in the mountains and practising shifting cultivation.

The Woodcutters of Java

The Kalangs of Java were skilled forest cutters and shifting cultivators. They are experts in harvesting teak and for the kings to build their palaces. When the Dutch began to gain control over the forests in the eighteenth century, they tried to make the Kalangs work under them. In 1770, the Kalangs resisted by attacking a Dutch fort at Joana, but the uprising was suppressed.

In 1770, the Kalangs resisted by attacking a Dutch fort at Joana, but their revolt was brutally suppressed.