The document Detailed Chapter Notes - Gender, Religion and Caste | EduRev Notes is a part of the Class 10 Course Social Studies (SST) Class 10.
All you need of Class 10 at this link: Class 10

Gender and PoliticsSexual Division of Labour: A system in which all work inside the home is either done by the women of the family or organised by them through the domestic helpers.The result of this division of labour is that although women constitute half of the humanity, their role in public life, especially politics, is minimal in most societies. Earlier, only men were allowed to participate in public affairs, vote and contest for public offices. Gradually the gender issue was raised in politics. Women in different parts of the world organised and agitated for equal rights.There were agitations in different countries for the extension of voting rights to women. These agitations demanded enhancing the political and legal status of women and improving their educational and career opportunities. More radical women’s movements aimed at equality in personal and family life as well. These movements are called FEMINIST movements.Political expression of gender question helped to improve women’s role in public life. We now find women working as scientists, doctors, engineers, lawyers, managers , college and university teachers which were earlier not considered suitable for women. Ours is still a male dominated, PATRIARCHAL society. Women face disadvantage, discrimination and oppression in various ways:

There are reports of various kinds of harassment, exploitation and violence against women. Urban areas have become particularly unsafe for women. They are not safe even within their own home from beating, harassment and other forms of domestic violence.Women’s political representation:-Issues related to women’s well being or otherwise are not given adequate attention. One way to ensure this is to have more women as elected representatives. In India, the proportion of women in legislature has been very low. For example, the percentage of elected women members in Lok Sabha has never reached even 10 per cent of its total strength. Their share in the state assemblies is less than 5 per cent.One way to solve this problem is to make it legally binding to have a fair proportion of women in the elected bodies. This is what the Panchayati Raj has done in India. One-third of seats in local government bodies – in panchayats and municipalities – are now reserved for women. Now there are more than 10 lakh elected women representatives in rural and urban local bodies.Women’s organisations and activists have been demanding a similar reservation of at least one-third of seats in the Lok Sabha and State Assemblies for women. A bill with this proposal has been pending before the Parliament for more than a decade. But there is no consensus over this among all the political parties. The bill has not been passed. 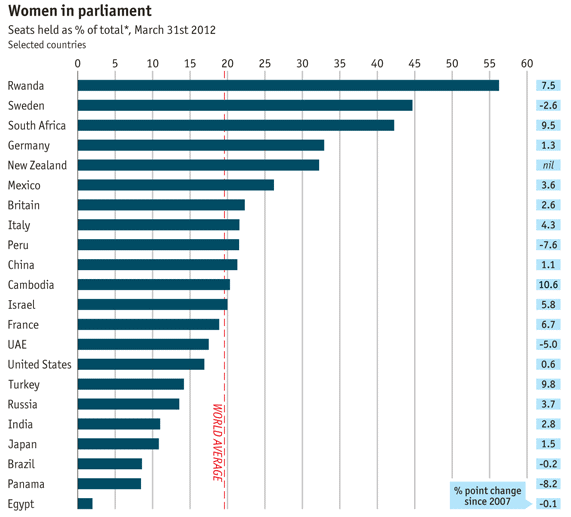 Religion & Politics:-Ideas, ideals and values drawn from different religions can and perhaps should play a role in politics. People should be able to express in politics their needs, interests and demands as a member of a religious community. Those who hold political power should sometimes be able to regulate the practice of religion so as to prevent discrimination and oppression. These political acts are not wrong as long as they treat every religion equally. 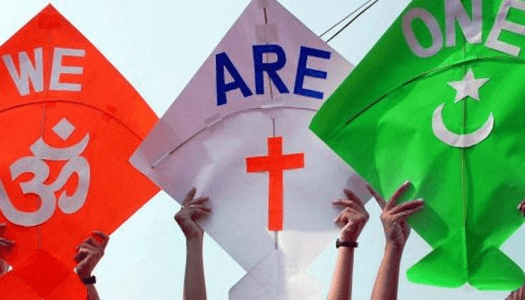 Fig: Religion and politics should never be mixed 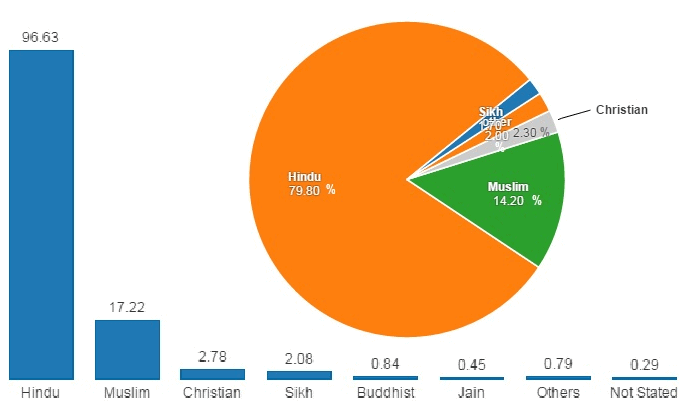 Fig: Division of population on the basis of religion

Caste and politicsUnlike gender and religion, caste division is unique to India. All societies have some kind of social inequality and some form of division of labour. In most societies, occupations are passed on from one generation to another. Caste system is an extreme form of this. What makes it different from other societies is that in this system, hereditary occupational division was sanctioned by rituals. Members of the same caste group were supposed to form a social community that practiced the same or similar occupation, married within the caste group and did not eat with members from other caste groups. Caste system was based on exclusion of and discrimination against the ‘outcaste’ groups. They were subjected to the inhuman practice of untouchability.Current Status of Caste Related Prejudice:Partly due to efforts of our great leaders and partly due to other socio-economic changes, castes and caste system in modern India have undergone great changes. With economic development, large scale urbanisation , growth of literacy and education, occupational mobility and the weakening of the position of landlords in the villages, the old notions of caste hierarchy are breaking down.Now, most of the times, in urban areas it does not matter much who is walking along next to us on a street or eating at the next table in a restaurant. The Constitution of India prohibited any caste-based discrimination and laid the foundations of policies to reverse the injustices of the caste system.Yet caste has not disappeared from contemporary India. Some of the older aspects of caste have persisted. Even now most people marry within their own caste or tribe. Untouchability has not ended completely, despite constitutional prohibition. Effects of centuries of advantages and disadvantages continue to be felt today.The caste groups that had access to education under the old system have done very well in acquiring modern education as well. Those groups that did not have access to education or were prohibited from acquiring it have naturally lagged behind. That is why there is a disproportionately large presence of ‘upper caste’ among the urban middle classes in our country. Caste continues to be closely linked to economic status.Caste in Politics