Try yourself:Which term is used for the original plant cover of an area which has grown naturally?
Explanation

Natural vegetation refers to a plant community which has grown naturally without human aid and has been left undisturbed by humans for a long time. This is termed as a virgin vegetation.

Factors which affect the diversity of flora and fauna are as following:

Precipitation determines the density of vegetation. Areas of heavy rainfall have more dense vegetation as compared to other areas of less rainfall.

Try yourself:The character and extent of vegetation are mainly determined by which of the climatic factor?
Explanation

Importance of Forests for Human life

It is an integrated unit consisting of the community of living organisms and the physical environment in a particular area. Plants occur in distinct groups of communities in areas having similar climatic conditions. The nature of the plants in an area, to a large extent, determines the animal life in that area. 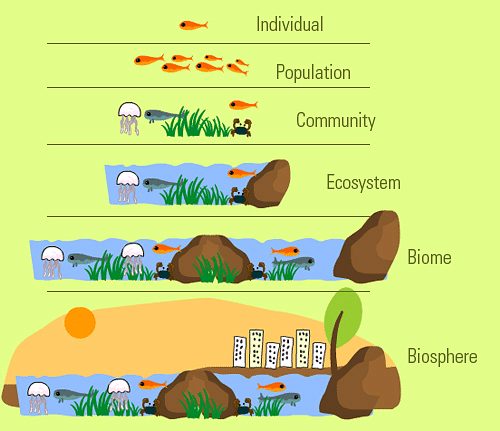 Difference between Ecosystem and Biome

A very large ecosystem on land having distinct types of vegetation and animal life is called a biome. Biomes include both flora and fauna, but it is mainly the plant formations that are used as the basis of their grouping.On the basis of the order of availability of soil, water and heat, the world is divided into five principal biomes:

On the basis of the availability of water, these forests are further divided into:(a) Moist Deciduous

In mountainous areas, the decrease in temperature with increasing altitude leads to the corresponding change in natural vegetation:

The southern slopes in Himalayan region covered with thick vegetation as compared to northern slopes of the same hills on account of more exposure to sunlight, more precipitation, and less exposure to colder wind.

Try yourself:Ebony, mahogany and rosewood trees are grown in which type of the forests?
Explanation

The commercially important trees of the tropical rain forest are ebony, mahogany, rosewood, rubber and cinchona.

Some of the important reasons for the declining wildlife are as follows:

Try yourself:Which one of the following bio-reserves of India is not included in the world network of bio-reserve?
Explanation