How is a Major Policy Decision Taken?A Government Order

On August 13, 1990, the Government of India issued an Order which was called an Office Memorandum. The order says that other than SC and ST the 27% job reservation benefit will be given to a new third category called Socially and Educationally Backward Classes (SEBC). Only persons who belong to backward classes were eligible for this quota.

Who decided to issue this Memorandum? Such a major decision would have involved other major functionaries in India, which involves the following points:

When the Office Memorandum was passed in India, it was a hot debate issue. Some felt that this was unfair as it would deny equality of opportunity to those who did not belong to backward communities. While others felt that this would give a fair opportunity to those communities who so far had not adequately been represented in government employment. This dispute was finally resolved by the Supreme Court of India by hearing all the cases. This case was known as the ‘Indira Sawhney and others Vs Union of India case’. The Supreme Court judges in 1992 declared that this order of the Government of India was valid. Thus, the dispute came to an end and this policy has been followed since then.

Several arrangements are made in modern democracies which are called Institutions. Democracy works well when these institutions perform functions assigned to them.

The Indian Parliament is an important organ of the Central Government. Let us study its composition and powers.

(a) Two Houses of Parliament

Try yourself:What is another name of the Lok Sabha?
Explanation

Legislature of the Union, which is called Parliament, consists of the President and two Houses, known as Council of States (Rajya Sabha) and House of the People (Lok Sabha).

Essential Qualifications for the Members of the Parliament:

Speaker of the Lok Sabha

Duties of the Speaker:

(b) Powers and Functions of the Parliament

Although the primary function of the Parliament is law-making, our Parliament has to perform a galaxy of other functions too.

Control on the National Finance or Financial Powers

Control over the Government or the Executive Powers

Try yourself:How can a judge of the Supreme Court be removed?
Explanation

The judge of the supreme court can be removed from his office by the President on the recommendation of the Parliament. The address for removal must be supported by a special majority of each house of parliament (the majority of the total membership of that house) and the majority of not less than two-thirds of the members of that house present and voting. The grounds of removal are proved misbehaviour or incapacity.

(c) How is a Bill Passed in the Parliament? 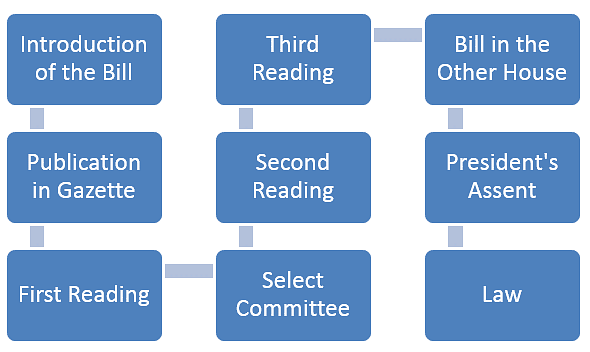 Passing of an Ordinary Bill

The difference in the procedure of passing an Ordinary Bill and a Money Bill:

Try yourself:What happens if there is a difference of opinion between Lok Sabha and Rajya Sabha over an ordinary bill?
Explanation

In the case of a different opinion between the Lok Sabha and the Rajya Sabha over the ordinary bill, then the joint meeting of both the houses will be called for a discussion. In this session, the Prime Minister plays a very important role.

(d) When can the Parliament legislate on the subject provided in the State list?

The constitution has established a federation in India but still, the Centre has made more powerful.

In certain circumstances, the Parliament can legislate on state matters:

The Central Executive consists of the President, the Vice-President, the Prime Ministers, and the Bureaucracy of the Civil Services. 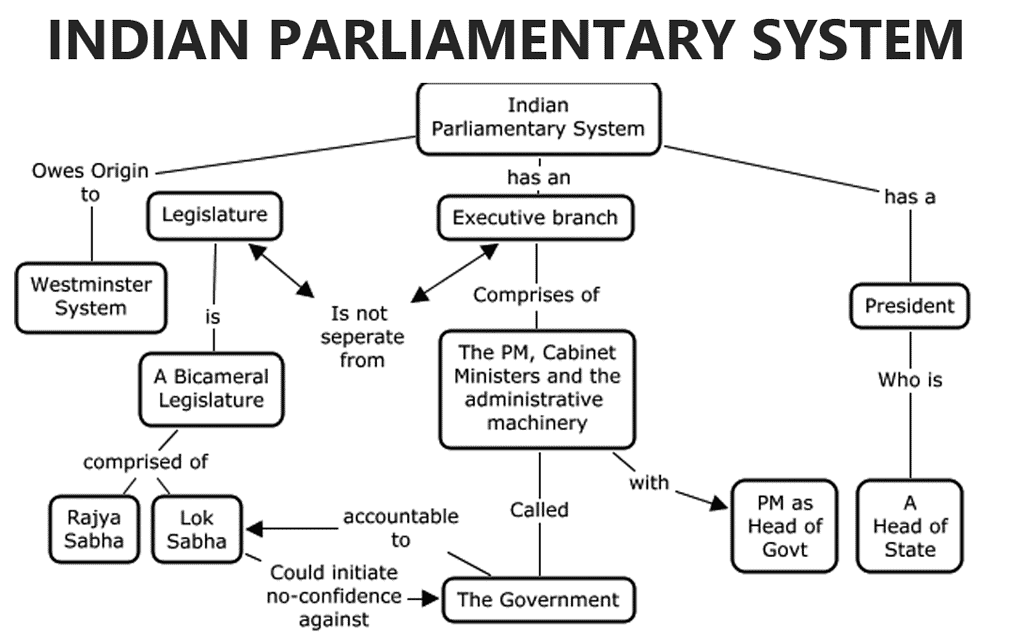 Essential Qualifications for the President:

Election of the President

Try yourself:The president of India is elected by
Explanation

Note:He used to get a salary of twenty thousand rupees which could not be reduced during his term of office.In August 1998, the Indian Parliament passed a bill hiking the pay of the President from Rs.20,000 to Rs. 50,000 in addition to his usual allowance, perks and privileges as detailed in the Second Schedule (Part-A) of the Constitution.This hike has been necessitated because of the revision of the pay scales of the Central Government employees as a result of the recommendations of the Fifth Pay Commission.

Removal of the President

(b) Powers and Functions of the President

Executive Powers of the President

Try yourself:Who among the following is the Supreme Commander of the Indian Armed Forces?
Explanation

Legislative Powers of the President