The document Detailed Notes: Animal Life(Part - 3) Class 5 Notes | EduRev is a part of the Class 5 Course Science Class 5.
All you need of Class 5 at this link: Class 5

Animals, which live mostly in air and have feathers and wings are called as Birds. All birds have wings but not all birds can fly. Millions of year ago some birds went back to sea and their feathers are adapted according to water to help them in swimming.

More than 9,000 kinds of birds are present today. The size of birds varies from the largest African ostrich (taller than and man) to the smallest humming bird of 3 - 4 cm length.

Look at the parts of body of a bird in the following picture: Look at the following table of types of birds: 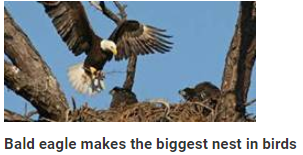 Feeding in BirdsBirds eat nuts, fruits, grains, etc. Few birds are carnivorous and eat other animals such as, eagle, vulture, hawk and owls. Owl is found in farmland and has light face with black eyes. Owl generally catches its prey in the darkness- Its prey includes other birds even the babies of eagles and hawk. Vultures are scavenger and feed on animals that are already dead.

Migration in Birds (Adaptation to Weather)

Some birds leave their homes during winter to find food in warmer places. This is called migration. The arctic tern breeds during summer and then travels a distance of 17,000 km to the Antarctic in the south. It again goes back to the same place to breed.

Siberian crane migrate to India (Bharatput birds sanctuary and other) during winter, it goes back to Siberia in summer.

NestBirds lay eggs in nests on the trees, roof of the houses, holes in the ground and along river banks. 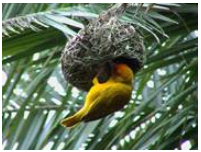 1. Webbed feet and water proof feathers are the features of which one of the following types of birds?(a) Flightless birds(b) Water birds(c) Walking birds(d) Birds flying at height(e) None of theseAnswer: (b)ExplanationWater birds have webbed feet to make them swim faster. Water proof feathers are adaptation to live in water. Therefore, option (B) is correct and rest of the options is incorrect.

2. Ayush is the only child of his parents, he finds himself alone at home because his parents are working. He was advised to keep bird as a pet in his house but he was confused as which birds he should purchase? Which bird you would suggest for him?(a) Albatross(b) Flamingo(c) Parakeet(d) Penguin(e) SunbirdAnswer: (c)ExplanationParakeet is a small parrot and popular pet. It can mimic human speech and form sentences and it can be a good friend in his spare time.Therefore, option (C) is correct and rest of the options is incorrect..