If the axial and shear deformations in different members of the frame are assumed to be negligible, the reduction in the degree of kinematic indeterminacy would be equal to    [2017: 1 Mark, Set-II](a) 5(b) 6(c) 7(d) 8Ans. (b)Solution. DOF of Joints:

When all members are extensible,

Note : Shear deformation is not considered in calculation of DK.

Q.3. A planar truss tower structure is shown in the figure. 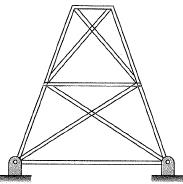 Try yourself:The kinematic indeterminacy of the plane truss shown in the figure is
[2016: 1 Mark, Set-II]

View Solution
Try yourself:A guided support, as shown in the figure below, is represented by three springs (horizontal, vertical and rotational) with stiffness kx, ky and ke respectively. The limiting values of kx, ky and ke are   [2015: 1 Mark, Set-II] 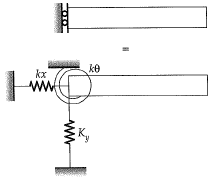 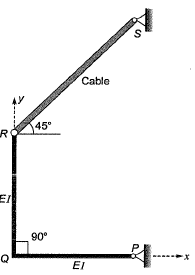