Dielectric Properties of Materials Dielectric Constant and Polarization of dielectrics

Dielectrics are electrically non-conducting materials such as glass, porcelain etc, which exhibit remarkable behavior because of the ability of the electric field to polarize the material creating electric dipoles.

is average dipole moment per molecule and N is number of molecules per unit volume.Also

where α is a constant of proportionality called polarizability 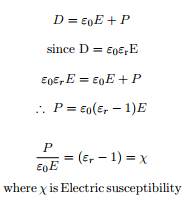 The net polarization of the material is due to the contribution of all four polarization mechanisms.P = Pe + Pi + Po + Ps

(1) Electronic polarization: This occurs through out the dielectric material and is due to the separation of effective centers of positive charges from the effective centers of negative charges in atoms or molecules of dielectric material due to applied electric field. Hence dipoles are induced within the material. This leads to the development of net dipole moment in the material and is the vector sum of dipole moments of individual dipoles.The electric dipole moment is given by 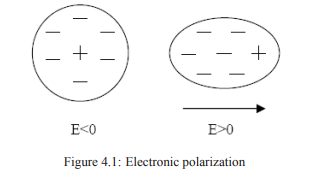 Electronic Polarization Pe is given by 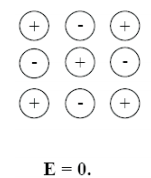 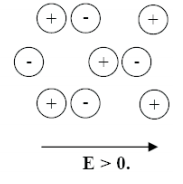 where N is the number of atoms per unit volume. 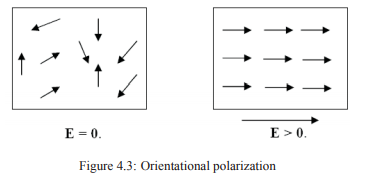 (3) Orientation Polarization:This occurs in polar dielectric material, which possess permanent electric dipoles. In polar dielectrics the dipoles are randomly oriented due thermal agitation. Therefore net dipole moment of the material is zero. But when the external electric field is applied all dipoles tend to align in the field direction. Therefore dipole moment develops across the material. This is referred to as orientation polarization (P0). Orientation polarization depends on temperature. Higher the temperature more will be the randomness in dipole orientation thereby reducing the dipole moment.

The orientation polarizability is given by α0 = µ2/3kT , where ‘k’ is Boltzman constant, T is absolute temperature and µ is permanent dipole moment.

(4) Space charge polarization:This occurs in materials in which only a few charge carriers are capable of moving through small distances. When the external electric field is applied these charge carriers move. During their motion they get trapped or pile up against lattice defects. These are called localized charges. These localized charges induce their image charge on the surface of the dielectric material. This leads to the development of net dipole moment across the material. Since this is very small it can be neglected. It is denoted by Ps.