In the previous lecture we obtained a multipole expansion of the potential due to a continuous charge distribution. We discussed in some detail, the dipole part of this expansion and will be doing so in further detail later in this lecture. Let us make some comments on the quadrupoleterm.

The most elementary quadrupole consists of two dipoles oriented anti-parallel. A linear dipole is one where the four charges are lined up with the two dipoles being end to end but directed oppositely, so that there is a charge 2q at the centre and –q each at the ends.

where the quadrupole moment tensor is given by

Note that since I and j take three values each, the quadrupole moment is a tensor of rank two with 9 components. A few properties of quadrupoleare :

1. The tensor is traceless. (Recall that the trace of a matrix is sum of its diagonal components. This can be easily proved by taking i=j and summing over i.

2. At large distances quadrupolefield decreases as inverse fourth power of the distance from the source. (This is easily proved by inspection as the potential goes as inverse cube of distance).

We now return back to the dipole term which is the most important term for the case of a neutral dielectric. Observe that the dipole moment defined by

depends, in general, on our choice of origin, for, if we let

Thus only for the case of the dielectric not having a net charge will it be independent of the choice of origin.

We had seen that the potential due to the dipole contribution to the charge distribution is the one that we would obtain if we have a volume charge density and a surface charge density,

where the charge densities are related to the polarization vector by

It may be emphasized that the bound charges, whether in volume or on the surface, are not fictitious charges; they are very real and their only difference with the free charges which we have in conductors is that they are bound to their parent atoms or molecules.

is an auxiliary field defined by

Using the relationship of the polarization vector with the bound charge densities, we get,

is given by mentally isolating the bound charges from free charges. There is really no physical way of doing it but defining such a displacement vector leads to substantial simplification.

where Qf is the total free charges in the sample.

Boundary Conditions on the surface of a dielectric

We recall that in deriving the boundary condition On the surface of a conductor, we had taken a Gaussian Pillbox of infinitesimal height, half inside the conductor And half outside. The field inside the conductor being zero, the contribution to the flux came only from the top face of the pillbox, since the thickness of the pillbox being negligible the curved surface did not contribute. In the present case, there is a difference because the field inside is not zero. Further, one has to remember that at the interface, the normal is outward for the outside face and inward for the inside face. 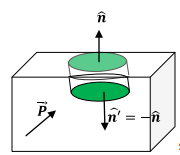 Let us assume that there no free charges on the surface.

Using the divergence theorem on both sides,

The contribution to the surface integral on both sides, as mentioned before, are from the surfaces only with the directions of the normal being opposite,

Where we have taken the direction of normal in this equation as going away from the surface (i.e. outward). Thus we have,

the reason for the minus sign is that outside the material σb = 0.

Thus, if there are no free surface charges we have the normal component of

The tangential components can be shown to be continuous by use of Stoke’s theorem. We take a rectangular contour across the surface.

In the above, the outside medium is denoted as 1 and the inside by 2.

We define a linear dielectric as one where the polarization at a point in the dielectric is proportional to the electric field at the point.

The quantity Xe is known as the electric susceptibility. Using the relation between the displacement vector and the electric field vector, we have, 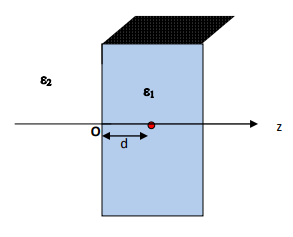 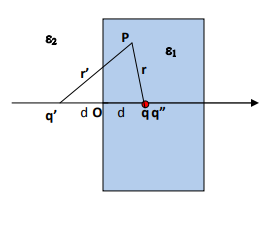 The interface is the z=0 plane and has no free charges on it. Based on our experience of solving similar problem using images, we will attempt to write down an expression for the potential at the point P. Since there are no free charges on the surface Dn = Dz is continuous across the surface. Thus

In addition, of course, the tangential component of

continuous. Since the surface is in the x-y plane, we have

In solving this problem, we fall back on the uniqueness theorem and attempt to solve the problem by intuitive method.

Assume that in the medium 1,i.e., in the region z>0, the solution is the same as one would obtain by filling up the entire space by a dielectric of permittivity ∈1 and put an image charge q’  at z = -d. The potential at a point P (the entire space is now a uniform medium) is given by

For the potential in medium 2, we assume that the solution would be the same as one would obtain by filling up the entire space by a dielectric of permittivit ∈2 and put an image charge at the location of the charge q, i.e. at z = d. We denote the sum of the original charge plus its image by q". Thus the potential at the point P is due to a single charge  q" and is given by

Using the continuity of the normal component of the displacement vector,

(Remember that the direction of the outward normal at the interface was taken as uniquely defined). We have

The tangential component of the electric field is obtained by differentiating the expressions for the potential with respect to x or y,

So that we have,

In both media Laplace’s equation and the boundary conditions are satisfied and the solution is unique.

1. Find the first few multipole moments of a linear quadrupole aligned along the z direction.

2. Consider a quadrupole in the xy plane as shown. Determine the components of the quadrupole moment tensor in Cartesian coordinates. 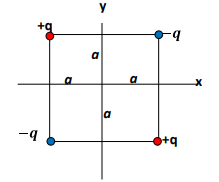 3. Two dielectrics having permittivity ∈1 and ∈2 have an interface which has no free charges. The electric field

in medium 1 makes an angle θ1 with the interface while

the field in medium 2 make an angle θ2. Find the relationship between the two angles.

1. In spherical polar coordinates, the charges +q are at (a,0,0) and (a,π,0). The charge densities of the distribution of charges is

The multipole moment of this charge distribution is (for l > 0,)

The multipole moment vanishes for all odd l. For even l, 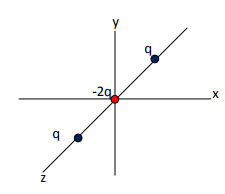 2. The charge density can be written in terms of delta functions

All other components are zero because the quadrupole is in the xy plane.

3. At the interface between two dielectrics, the tangential component of

2. Three linear quadrupoles are arranged along the x, y and z axes with the central charge of each being at the origin and the other two charges at a distance a each from the origin. Show that the quadrupole moment of this superposition of the quadrupoles is zero. What is the lowest non-vanishing multipole of this configuration?

3. A rectangular parallelepiped having dimension

5. At the interface between two dielectrics with relative permittivity 2 and 3, there is a free charge density

The electric field strength in the first medium has a magnitude

and its direction makes an angle of tan

with the interface. Find the electric field in the second medium.

1. The method is the same as that adopted for Problem 1 of the tutorial assignment. When the charges are along the x-axis, the coordinates of the charges +q are at

The multipole moments are given by, for l > 0

R.h.s. is zero for odd values of m. For the quadrupole located along the y axis,

Once again, the multipole moment is zero for odd values of m.

Let us compute quadrupole moments for which

For calculating q22 note that the first term is zero because of Kronecker delta function while the second term valishes. Thus all components of the quadrupole moment vanishes .

The next moment is for l = 3. The first term only contributes for even l, and, for the second term we have  p3m (1) = 0. Thus the octupole moments also vanish. The first non-zero moment is l = 4, which is called” hexadecupole” moment.

3. Let us position the dielectric so that the end faces are parallel to the three Cartesian axes.

The volume density of bound charges is

Since the density is constant, the total volume charge is obtained by multiplying this with the volume, i.e., qb = -3k abc. Now we need to calculate the bound charges on the surface. Note that

on each face is given by the distance of that face from the centre. For instance, the top face (or the bottom face) which is at a distance b from the origin has

Each of the six faces contribute the same, giving a total of which is exactly the equal and opposite of the total volume charge

Let the normal component of the electric field at the point P on the sheet be due to the line charge be En. 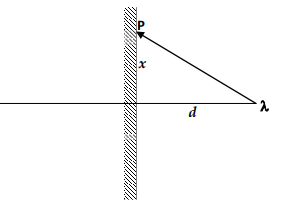 Since the normal component of D field is continuous, we have (recall that the outward normal direction is uniquely defined)

This is the induced charge. The field due to this at P is

Comparing this with the expression for the normal component of the field, we see that this field is equivalently produced by locating an image line with line charge density

at a distance d from the interface, inside the dielectric.

5. At the interface between two dielectrics, the tangential component of

we get from the second equation,

Thus tan θ2 = 1 i.e. the electric field makes an angle of 450 with the interface.The field strength in the second medium is