So far we have been discussing electrostatics in either vacuum or in a conductor. Conductors, as we know are substances which have free electrons, which would move around the material if we applied electric field. Under equilibrium conditions, the electric field inside is zero and free charges, if they exist, can only exist on the surface of the conductor. This, of course, is not true if we connect a piece of conductor across the terminals of a battery, which is not an equilibrium situation.

As a result of the above, a dielectric is capable of producing an electric field both inside and outside the material, though the matter as a whole is electrically neutral. In this lecture we will consider the effect of such charge separation in a material on the electrostatic field and also discuss how it modifies the Maxwell’s equations that we have obtained so far.

Consider a material which consists of spherically symmetric atoms and molecules. The charge distribution inside an atom or a molecule consists of positively charged nuclei and a negatively charged electron cloud charge centres of which coincide. Recall that we had defined a dipole as an entity which has equal positive and negative charge separated by a distance. The dipole moment of an individual dipole was defined as a vector which has a magnitude equal to the product of the magnitude of either charge and the distance between them and which has a direction from the negative charge towards the positive charge. This means the individual atom or the molecule do not have a dipole moment and the net dipole moment of the dielectric, which is defined as the vector sum of the dipole moments of the constituents atoms and molecules is zero. This is of course true excepting when one looks at submicroscopic level. 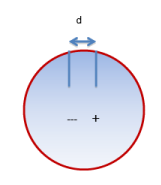 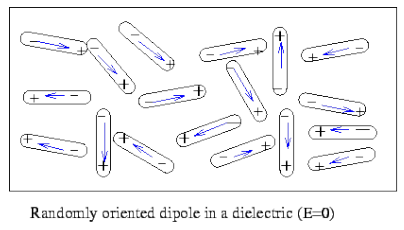 Let the angle between

We expand the distance between the two points in terms of inverse powers of r in a binomial series and in the coefficient of a given power of 1/r we write the angle term in terms of powers of the cosine function.

We will simplify this last expression by making some observation about its structure. Now, cos θ can be written as

We will express the dot product in terms of components of the two vectors,

Here we have introduced the notation in which x, y and z are respectively denoted by x1,x2 and x3 respectively. Putting r’=r we write the square of the distance r as,

where δi,j is the Kronecker delta function which has the value 1 if i=j and is zero otherwise.

We start with the general expression for the potential due to a continuous charge distribution and insert into it the expansion obtained above,

The omitted terms are of higher order in inverse distance r. Let us examine the individual terms written above.

The first term just has an integral of the charge density over the entire volume which is simply the total charge Q in the distribution. The contribution to the potential by this term is

This is just the potential due to a point charge at a distance r. This is the term which dominates when the distances are very large so that even the second and the third terms of the above expression can be neglected. It may be observed that at such large distances, the charge distribution looks like a point as viewed from P. This term vanishes if the material does not have a net charge.

The second term has an integral where the integrand is charge density multiplied with the vector distance. This term has the dimension of a dipole moment and we define the dipole moment of a charge distribution by the relation,

The second term then gives,

We will make some brief comments about the third term. It has the dimension of charge multiplied by square of distance and is known as a “quadrupole” term. The simplest quadrupole is four charges of identical magnitude but a pair having opposite sign to the other pair arranged at the four corners of a square. There are other ways of arranging them. The term is quite messy and we will worry about it later. The next higher order is known as an octupole term etc.

What makes the expression for the potential messy is that in the original form for the coulomb potential due to a continuous charge distribution, the coordinate of the point of observation r is not decoupled from the integration variable r’ and as a result one has to perform a separate integration at each point where one desires to calculate the potential.

Recall that while expanding

we had used the angle

Instead, if we used the coordinates of the positions

in terms of “spherical harmonics” which we had occasion to deal with earlier. Assuming that

the expansion is given by,

Note that in this expression the integration variable is completely decoupled from the position vector of the point where the potential is being calculated. This, in turn, means that the integral is to be calculated only once and the result of integration can be used for evaluating the potential at all points in the field. This is known as the multiplole expansion of the potential. We define Multipole moments by the relation

where l can take any non-negative integral value and corresponding to a given l, m takes values from - l to + l in steps of 1. Let us examine a few lower order multipoles. In terms of these moments, we have,

Using these, we have

which is just the total charge excepting for a constant factor. The next moments are

Realising that we have the following expressions for Cartesian coordinates

we can write the above as

The next terms are components of quadrupole moment tensor.

If the body is charge neutral, from the expression for potential due to a point dipole at the origin (i.e.

we can write the following expression for the case of a continuous charge distribution,

We will now simplify this expression using some vector calculus. First we observe that

using which we can write,

the negative sign is removed because the gradient is taken with respect to the primed coordinate. We know that the divergence of a scalar times a vector is given by the following relation

Using this we rewrite the expression for the potential as sum of two terms,

Thus the effect of the dielectric is to replace the original problem with an effective surface and a volume charge densities. These being bound to the atoms and molecules in the material are known as “bound” as opposed to free charges. The charges in a body could consist of both free charges and bound charges. The electric field is the field that a test charge experiences. This consists of contribution due to both types of charges. Thus the Maxwell’s equation for the electric field,

One defines a “displacement vector”

It is easily seen that

is a vector which we made up which artificially tries to separate the effect of the bound charges from the problem and gives the effect due to free charge. In practice it is not possible to do so and the electric field

is the one that we can really measure. Nevertheless introduction of

leads to some mathematical simplification. It may be noted that

does not have the same dimension as that of

The bound volume charge is given by the divergence of the polarization vector. One can visualize this by looking at the way the dipoles are arranged when an electric field is applied. It can be seen that the central region tends to get negative charges which become a source. Similarly, the charges inside the material, other than in the central region compensate , leaving net charges on the surface which is the origin of the surface charge density. 1. The charge distribution inside a sphere of radius R is given by the expression

Find an approximate expression for the potential along the z axis far away from the sphere by retaining the first non-vanishing term in a multipole expansion.

2. A ring of radius R has a uniform, linear charge density λ. Calculate the potential at large distances by retaining up to the quadrupole term in a multipole expansion of the potential.

1. Multipole moments are given by

Let us calculate the total charge

We next calculate the dipole term

vanishes for m=1, leaving us with

Because the angle integral vanishes. Let us calculate the quadrupole term:

The general expression for potential is

It is straightforward to show that the volume integral of this expression gives the total charge Q = 2πR.

The multipole moments are given by

as a factor, which on integration, would give zero. Thus only m=0 terms survive, a fact also obvious from the azimuthal symmetry of the problem. The monopole term is equal to the total charge, except for a multiplying factor of

The dipole term vanishes because Y10 ∝ cos θ  which makes the integral over θ vanish because of the delta function. The quadrupole term,

1. Show that for a uniformly charged sphere, all multipole moments other than q00 vanishes.

2. In the multipole expansion of Coulomb potential, there are three dipole terms corresponding to

3. A charge distribution is given by

Expand the potential due to this charge density in a multipole expansion and obtain its leading term for large distances.

1. This is shown by orthogonality of spherical harmonics,

2. Since we are only interested in the dipole term, the general expression for the potential for this term is

We can calculate the three dipole moments as follows:

q1,-1 is similarly calculated and gives,

Substituting these into the expression for the potential we get

The multipole moments are then given by

The integral over r gives (l + 2)!. By orthogonality of the spherical harmonics, only non zero moments are for l = 0,2. We have,

Thus, the potential is given by