The document Dielectrics, Polarization, and Electric Dipole Moment Physics Notes | EduRev is a part of the Physics Course Basic Physics for IIT JAM.
All you need of Physics at this link: Physics 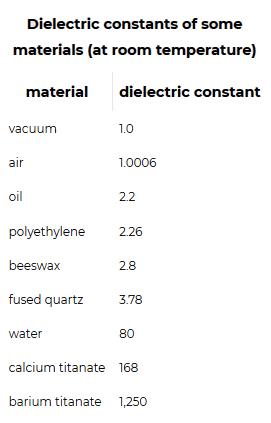 The presence of a dielectric affects many electric quantities. A dielectric reduces by a factor K the value of the electric field and consequently also the value of the electric potential from a charge within the medium. As seen in Table 1, a dielectric can have a large effect. The insertion of a dielectric between the electrodes of a capacitor with a given charge reduces the potential difference between the electrodes and thus increases the capacitance of the capacitor by the factor K. For a parallel-plate capacitor filled with a dielectric, the capacity becomes C = Κε0A/d. A third and important effect of a dielectric is to reduce the speed of electromagnetic waves in a medium by the factor Square root of√K .Capacitors come in a wide variety of shapes and sizes. Not all have parallel plates; some are cylinders, for example. If two plates, each one square centimetre in area, are separated by a dielectric with Κ = 2 of one millimetre thickness, the capacity is 1.76 × 10−12 F, about two picofarads. Charged to 20 volts, this capacitor would store about 40 picocoulombs of charge; the electric energy stored would be 400 picojoules. Even small-sized capacitors can store enormous amounts of charge. Modern techniques and dielectric materials permit the manufacture of capacitors that occupy less than one cubic centimetre and yet store 1010 times more charge and electric energy than in the above example.