We continue with our discussion of dielectric medium.

The problem is very similar to the one we did for the case of a conducting sphere in an electric field. At far distances from the sphere, the field is uniform and is equal to

which corresponds to a potential of φ = -E0r cos θ.

The potential itself is continuous at r=R,

and the electric field inside the dielectric is

We observe that if a dipole is kept at the origin of a sphere of radius R, since the radius of the sphere can be considered very large compared with the dimensions of the dipole, the field is given by

Thus the field due to the dielectric can be written as

Note that the polarization in the medium is uniform and is directed along the direction of the external field. The field lines approach the sphere from the left (negative z direction) and leave from the right, making the left face of the sphere negatively charged. 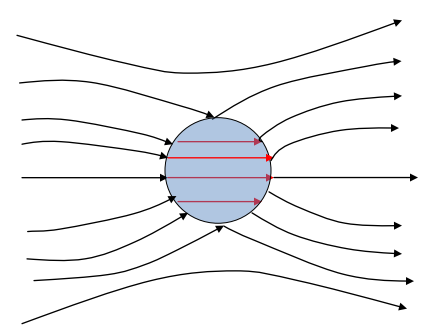 Consider a point charge in an isotropic dielectric with permittivity ∈. Taking the position of the charge at the origin, the field must be radial. The displacement field can be found from the Gauss’s law,

Since the dielectric is uniform,

The dielectric constant is a measure of the factor by which the electric field gets reduced in a linear dielectric medium. The polarization vector is given by

Consider a Gaussian sphere of radius r. We can calculate the volume charge density inside the volume by the negative divergence of the polarization vector,

However, there is a bound surface charge density. Since the dielectric is inside the sphere, the surface direction is inward

Thus there exists a net negative bound charge. The total charge is obtained by multiplying the above with the surface area, viz., 4πr2 which gives

as the total charge bound to the surface. The effective charge seen by a test charge is the sum of the original charge as reduced by this amount, i.e.

i.e., the test charge experiences the electric field due to an effective charge screened by a factor equal to the dielectric constant of the medium.

Example : A parallel plate capacitor filled with a dielectric :

From the above discussion it is clear the electric field inside the dielectric will be reduced due to polarization effect of the dielectric. Consider a Gaussian pillbox in the shape of a rectangular parallelepiped of a very small thickness but of area a (A is the area of the plates)partly inside the medium through one of the plates and partly outside.

Since the plates have real charges, using Gauss’s law for the displacement vector, we have,

Q here is the total free charge on the plate. Thus,

from the negative plate towards the positive plate. The electric field in the dielectric is

which gives the capacitance to be

Thus the capacitance is increased by a factor of k, the dielectric constant. This, of course, is true only for a linear dielectric.

Before leaving the subject of electrostatics, we will briefly touch upon the molecular aspect of polarizability as opposed to a purely macroscopic treatment done so far.

We look at the dielectric as a collection of molecules. If the molecules are well separated, as would be the case in a gas, each molecule would experience an average macroscopic field

site. This could consist of any external field and an average field due to all other molecules etc. The polarization induced is the written in terms of electric susceptibility

For the case of a gas, the electric field is primarily due to the external field.

In a dense medium, however, this is not a good description because a particular molecule will be subject to a local field, which in addition to the external field, is due to interactions with the dipoles in its immediate neigbourhood as well as due to polarization of the other molecules in the medium. This local field induces a dipole moment

If there are n atoms per unit volume, the polarization is given by

However, since an atom cannot exert a force on itself, in computing the local field we must subtract the contribution to the polarization by the atom under consideration. For this purpose, let us divide the dielectric into two parts : a spherical volume of radius Rassigned to the atom in question which contains other atoms in the immediate neighborhood of the atom and the rest of the dielectric outside this volume. The “rest of the dielectric” will be treated in a macroscopic way which gives rise to an average field

taken along the z direction. To this field we must add the field which arise because of the spherical volume mentioned above.

The sphere can be treated as a cavity in an otherwise uniform medium. The inside surface of this cavity has a charge density σb corresponding to the uniform polarization.

Since the normal is directed inwards, the bound surface charge is

where θ is the polar angle with respect to the z axis. The electric field due to this charge distribution is easily calculated,

Now we must look into the interaction of the dipoles within the cavity with the molecule (dipole) in question). We had seen earlier that the field due to a dipole at a position

respect to the dipole is given by

The net field at the position of the atom is obtained by averaging the field due to all the dipoles. Since the molecules are oriented randomly, let us find the average of the field along the z direction,

Since the dielectric is isotropic, we have

Thus the total field is simply the sum of the first two contributions, i.e.

Since the induced dipole moment is proportional to the local field

This is called ClausiusMossotti Relation and it relates the atomic polarizability with the dielectric constant of the medium.

Energy of a charge distribution in a dielectric

In calculating the energy of a system of charges in a dielectric, we need to also take into account the work done in establishing the state of polarization of the dielectric.

be the potential in the presence of the charge density p. Since the charges are true charges, we have,

The first term is converted to a surface integral using the divergence theorem. If we take the integration to be over all space, as has been pointed out on several occasion, the fields and potential vanish and this integral does not contribute to the energy. Using

The total work done in establishing the charge distribution is then obtained by integrating this expression from zero field situation to the final field configuration. For linear dielectrics, we have,

, which can be used to get the energy expression as

1. A solid dielectric cylinder of dielectric constant k is placed in a uniform electric field

perpendicular to its length. Obtain an expression for the potential inside and outside the cylinder.

is set up in a medium of dielectric constant k. A spherical cavity of radius R is inside this medium. Find an expression for the electric field inside the cavity.

1. As the extent of the cylinder is infinite in the z direction, one can use polar coordinates to describe the potential. Since the far field pattern is φ(r) = - E0r cos θ, we take the following expressions to represent the potential (Note the difference between the solution in the polar case and that in the spherical case with azimuthal symmetry)

Use these to express A and B in terms of E0. The result is

2. Assume the dielectric to fill the entire space with the cavity centred at r=0. The problem has aqzimuthal symmetry. The potential is given by the expression

The corresponding electric field is

Self Assessment Quiz1. A parallel plate capacitor is filled with a linear dielectric whose dielectric constant varies linearly from the grounded bottom plate to the upper plate located at a distance d, by the relation k = k0 +cz. If the upper plate is at a potential of φ0, obtain expressions for (a) the potential as a function of z, (b) the electric field in the dielectric and (b) the polarization charge densities on the plates.

1. We start with an expression for the D field in the dielectric. As the plates contain free charge densities, the D field has a strength Q/A directed from the positive plate to the negative plate. The electric field is then given by

One can calculate the potential at any point by evaluating the line integral of the electric field from the bottom plate to a point at a distance z,

The expression for the electric field can be obtained by taking the negative gradient of the potential or by expressing the previously obtained expression in terms of given constants,

Thus the displacement vector is given by

Which is of course constant. The polarization vector is given by

2. Let the charge on the plates be +Q and the area of the plates be A. The displacement vector is D=Q/A. The electric field from z=0 to z= d/2

The potential in the region 1 is

The potential at z=d/2 is

. The potential in the region 2 is

The potential at z=d is then given by

The charge density is given by the normal component of the polarization vector,