In this method, appropriate weights are assigned to various commodities to reflect their relative importance in group. For the construction of price index number, quantity, weights are used i.e. amount of quantity consumed, purchased or marketed.
By using different systems of weighting we get a number of formulae which are as follows—

In this method the base year quantities are taken as weights. Symbolically—

The main advantage of this method is that it uses only base year quantity ; therefore there is no need to keep record of quantity consumed in each year.

Disadvantage It is a common knowledge that the consumption of commodity decreases with relative large increase in price and vice versa. Since in this method base year quantity is taken as weights, it does not take into account the change in consumption due to increase or decrease in prices and hence may give a biased result.

Paasche’s Method In this method current year quantities are taken as weights. Symbolically—

Dorbish and Bowley’s Method This method is the simple arithmetic mean of the Laspeyres’ and Paasche’s indices. This index takes into account the influence of quantity weights of both base period and current period. The formula is as follows:

Fisher ‘Ideal’ Method This method is the geometric mean of Laspeyres’ and Paasche’s indices. The formula is as follows—

Because of the following advantages this method is seldom referred as ideal method—
(1) The formula takes into account both base year and current year quantities as weights, and hence avoids bias associated with the Laspeyres’ and Paasche’s indices.
(2) The formula is based on geometric mean which is considered to be the best average for constructing index numbers.
(3) This method satisfies unit test, time reversal test and factor reversal test.

Disadvantage
(1) This method is more time consuming than other methods.
(2) It also does not satisfy circular test

Kelly’s Method
In this method fixed weights are taken as weights. This method is sometimes referred to as aggregative index with fixed weights method. Fixed weights are quantities which may be for some particular period (not necessarily of base year or the current year) and this is kept constant all the time. The formula is as follows—

(1) This index does not require yearly changes in the weights.

This method does not take into account the weight of either the base year or the current year. 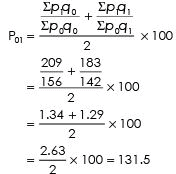