The document Differential Amplifier - Applications of Op-amp, CSIR-NET Physical Sciences Physics Notes | EduRev is a part of the Physics Course Physics for IIT JAM, UGC - NET, CSIR NET.
All you need of Physics at this link: Physics 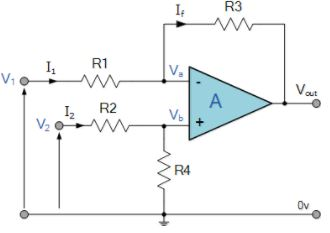 Thus far we have used only one of the operational amplifiers inputs to connect to the amplifier, using either the “inverting” or the “non-inverting” input terminal to amplify a single input signal with the other input being connected to ground. 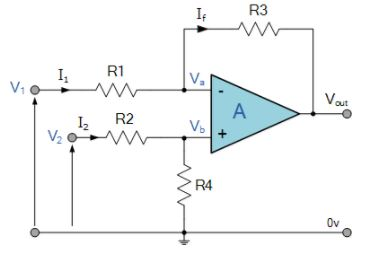 By connecting each input in turn to 0v ground we can use superposition to solve for the output voltage Vout. Then the transfer function for a Differential Amplifier circuit is given as: When resistors, R1 = R2 and R3 = R4 the above transfer function for the differential amplifier can be simplified to the following expression:

If all the resistors are all of the same ohmic value, that is: R1 = R2 = R3 = R4 then the circuit will become a Unity Gain Differential Amplifier and the voltage gain of the amplifier will be exactly one or unity. Then the output expression would simply be Vout = V2 – V1.

The Differential Amplifier circuit is a very useful op-amp circuit and by adding more resistors in parallel with the input resistors R1 and R3, the resultant circuit can be made to either “Add” or “Subtract” the voltages applied to their respective inputs. One of the most common ways of doing this is to connect a “Resistive Bridge” commonly called a Wheatstone Bridge to the input of the amplifier as shown below.

The standard Differential Amplifier circuit now becomes a differential voltage comparator by “Comparing” one input voltage to the other. For example, by connecting one input to a fixed voltage reference set up on one leg of the resistive bridge network and the other to either a “Thermistor” or a “Light Dependant Resistor” the amplifier circuit can be used to detect either low or high levels of temperature or light as the output voltage becomes a linear function of the changes in the active leg of the resistive bridge and this is demonstrated below.

Here the circuit above acts as a light-activated switch which turns the output relay either “ON” or “OFF” as the light level detected by the LDR resistor exceeds or falls below some pre-set value. A fixed voltage reference is applied to the non-inverting input terminal of the op-amp via the R1 – R2 voltage divider network.

The second leg of the differential amplifier consists of a standard light dependant resistor, also known as a LDR, photoresistive sensor that changes its resistive value (hence its name) with the amount of light on its cell as their resistive value is a function of illumination.

The LDR can be any standard type of cadmium-sulphide (cdS) photoconductive cell such as the common NORP12 that has a resistive range of between about 500Ω in sunlight to about 20kΩ or more in the dark.

The NORP12 photoconductive cell has a spectral response similar to that of the human eye making it ideal for use in lighting control type applications. The photocell resistance is proportional to the light level and falls with increasing light intensity so therefore the voltage level at V2 will also change above or below the switching point which can be determined by the position of VR1.

Then by adjusting the light level trip or set position using potentiometer VR1 and the switching hysteresis using potentiometer, VR2 an precision light-sensitive switch can be made. Depending upon the application, the output from the op-amp can switch the load directly, or use a transistor switch to control a relay or the lamps themselves.

It is also possible to detect temperature using this type of simple circuit configuration by replacing the light dependant resistor with a thermistor. By interchanging the positions of VR1 and the LDR, the circuit can be used to detect either light or dark, or heat or cold using a thermistor.

One major limitation of this type of amplifier design is that its input impedances are lower compared to that of other operational amplifier configurations, for example, a non-inverting (single-ended input) amplifier.

Each input voltage source has to drive current through an input resistance, which has less overall impedance than that of the op-amps input alone. This may be good for a low impedance source such as the bridge circuit above, but not so good for a high impedance source.

One way to overcome this problem is to add a Unity Gain Buffer Amplifier such as the voltage follower seen in the previous tutorial to each input resistor. This then gives us a differential amplifier circuit with very high input impedance and low output impedance as it consists of two non-inverting buffers and one differential amplifier. This then forms the basis for most “Instrumentation Amplifiers”.

Unlike standard operational amplifiers in which their closed-loop gain is determined by an external resistive feedback connected between their output terminal and one input terminal, either positive or negative, “instrumentation amplifiers” have an internal feedback resistor that is effectively isolated from its input terminals as the input signal is applied across two differential inputs, V1 and V2. 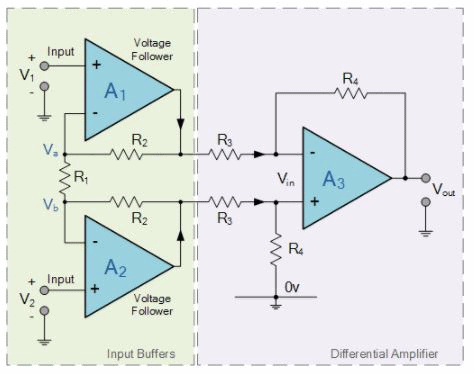 However, if a common-mode voltage is applied to the amplifiers inputs, the voltages on each side of R1 will be equal, and no current will flow through this resistor. Since no current flows through R1 (nor, therefore, through both R2 resistors, amplifiers A1 and A2will operate as unity-gain followers (buffers). Since the input voltage at the outputs of amplifiers A1 and A2 appears differentially across the three resistor network, the differential gain of the circuit can be varied by just changing the value of R1.

The voltage output from the differential op-amp A3 acting as a subtractor, is simply the difference between its two inputs ( V2 – V1 ) and which is amplified by the gain of A3which may be one, unity, (assuming that R3 = R4). Then we have a general expression for overall voltage gain of the instrumentation amplifier circuit as: