Suppose we have a function o f one variable: f i x ) then the derivative, d f kix tells us how rapidly the function fix) varies when we change the argument x by a tiny amount, dx:

Suppose that we have a function of three variables-say, V(x, y, z) in a

This tells us how V changes when we alter all three variables by the infinitesimal amounts dx, dy, dz. Notice that we do not require an infinite number o f derivatives-three will suffice: the partial derivatives along each of the three coordinate directions.Thus

is the gradient of V .

is a vector quantity, with three components.

Geometrical Interpretation of the Gradient

Like any vector, the gradient has magnitude and direction. To determine its geometrical meaning, let’s rewrite

. Now, i f we fix the magnitude

and search around in various directions (that is, varyθ), the maximum change in V evidently occurs when θ = 0(for then cos θ = 1). That is, for a fixed distance

dT is greatest when one move in the same direction as

points in the direction of maximum increase of the function F.Moreover:The magnitude

The unit vector, as required

Unit vector normal to the surface

Example 7: In electrostatic field problems, the electric field is given b y

The gradient has the formal appearance of a vector,

The term in parentheses is called “del”:

We should say that

is a vector operator that acts upon V, not a vector that multiplies V.There are three ways the operator

can act:1. on a scalar function V:

(the gradient);2. on a vector function

via the dot product:

(the divergence),3. on a vector function

via the cross product:

From the definition of

we construct the divergence:

Observe that the divergence of a vector function

is itself a scalar

(You can't have the divergence of a scalar: that’s meaningless.)

is a measure of how much the vector

here is a function-there’s a different vector associated with every point in space.)(a) 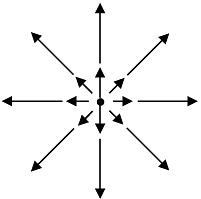 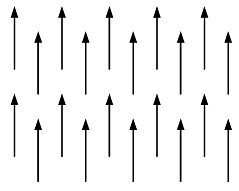 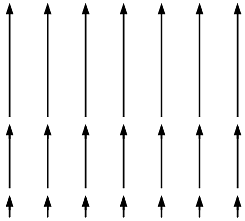 Example 8: Suppose the function sketched in above figure are

(i) In Cartesian coordinates,

The CurlFrom the definition of

we construct the curl

Notice that the curl of a vector function

is, like any cross product, a vector. (You cannot have the curl of a scalar; that’s meaningless.)

is a measure of how much the vector

‘‘curls around” the point in question. Figure shown below have a substantial curl, pointing in the z-direction, as the natural right-hand rule would suggest.(a) 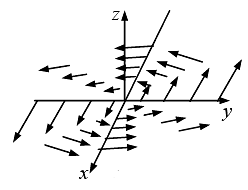 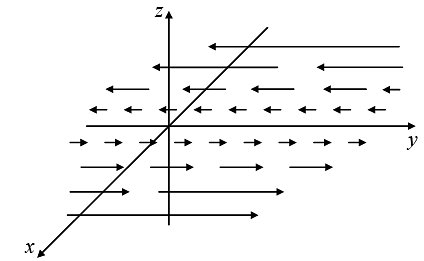 Example 10: Suppose the function sketched in above figure are

As expected, these curls point in the +z direction. (Incidentally, they both have zero divergence, as you might guess from the pictures: nothing is “spreading out”.... it just “curls around.”)

Example 11: Given a vector function

(a) Calculate the value of constants c1,c2,c3 if

is irrotational.(b) Determine the constant c4 if

(a) If A is irrotational then,

Examination of above expressions of V gives a general value of

Example 12: Find the curl of the vector

Example 13: Find the nature of the following fields by determining divergence and curl.

Divergence exists, so the field is non-solenoidal.

The field has a curl so it is rotational.(ii)

The calculation of ordinary derivatives is facilitated by a number of general rules, such asthe sum rule:

the rule for multiplying by a constant:

and the quotient rule:

It is also possible to formulate three quotient rules:

The gradient, the divergence, and the curl are the only first derivatives we can make with

twice we can construct five species of second derivatives. The gradient

is a vector, so we can take the divergence and curl of it:(1) Divergence of gradient:

This object, which we write

Occasionally, we shall speak o f the Laplacian o f a vector,

By this we mean a vector quantity whose x-component is the Laplacian of Ax, and so on:

A is a scalar-all we can do is taking its gradient.The curl of a gradient is always zero:

A is a vector, so we can take its divergence and curl.Notice that

is not the same as the Laplacian of a vector:

The divergence of a curl, like the curl of a gradient, is always zero:

As you can check from the definition of

So curl-of-curl gives nothing new; the first term is just number (3) and the second is the Laplacian (of a vector).