Fraunhofer’s diffraction at a single slit

Let a parallel beam of monochromatic light of wavelength λ be incident normally upon a narrow slit of width AB = b placed perpendicular to the plane of the paper. Let the diffracted light be focused by a convex lens L on a screen XY placed in the focal plane of the lens. The diffraction pattern obtained on the screen consists of a central bright band, having alternative dark and weak bright bands of decreasing intensity on both sides.

ExplanationIn terms of wave theory, a plane wavefront is incident normally on the slit AB.According to the Huygen’s principle, each point on AB sends out secondary wavelets in all directions. The rays proceeding in the same direction as the incident rays are focused at O, while those diffracted through an angleθ are focused at P . Let us find out the resultant intensity at P.Let AK be the perpendicular to BK. As the optical path from the plane, AK to P are equal, the path difference between the wavelets from A to B in the directionPath difference = BK = ABsinθ = bsinθThe corresponding phase difference =

Let the width AB of the slit be divided into n equal parts. The amplitude of vibration at P . Due to the waves from each part will be the same, say equal to a. The phase difference between the waves from any two consecutive parts is

= δ(say).Hence the resultant amplitude at P is R =

As n→∞, a→0 but the product na remains finiteThus Resultant Amplitude at P due is R =

The constant of proportionality being taken as unity for simplicity

Condition for Maximum and Minimum intensityDirection for Minimum Intensity

For minimum intensity I = 0 ⇒

For direction of maximum intensity

= A2The intensity of the first maxima I1 =

The intensity of the second maximaI2 =

Thus the ratio of intensities of the successive maxima

Clearly, most of the incident light is concentrated in the central maxima which occur in the direction α = 0 or 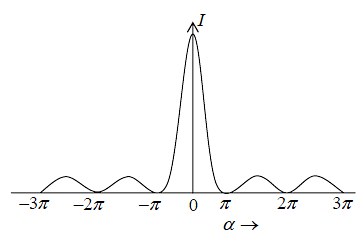 Effect of Slit Width on Diffraction PatternIf slit is made narrowerSince first minimum on either side of the central maximum occurs in the direction θ, given by equation bsinθ = ±λWhen the slit is narrowed (b is reduced), the angle θ increases which means the central maximum becomes wider. When the slit-width is as small as wavelength(b = λ ), the first minimum occurs atθ = 900, which means central maxima fills the whole space i.e. condition of uniform illumination.

Example 1: A monochromatic light with a wavelength of λ = 600nm passes through a single slit which has a width of 0.800mm.(a) What is the distance between the slit and the screen be located if the first minimum in the diffraction pattern is at a distance 1.00mm from the center of the screen?(b) Calculate the width of the central maximum.

(a) The general condition for destructive interference is

For smallθ , we employ the approximation sinθ ≈ tanθ = y/D which yields

Example 2: A monochromatic light is incident on a single slit of width 0.800mm and a diffraction pattern is formed at a screen which is 0.800 m away from the slit. The second order bright fringe is at a distance 1.60mm from the centre of the central maximum. What is the wavelength of the incident light?

The general condition for destructive interference is

where small-angle approximation has been made.

The approximate wavelength of the incident light is then

Example 3: Light of wavelength 580 nm is incident on a slit having a width of 0.30 mm. The viewing screen is 2 m from the slit. Find the positions of the first dark fringes and the width of the central bright fringe. What if the slit width is increased by an order of magnitude of 3.0 mm? What happens to the diffraction pattern?

To analyze the problem, note that the two dark fringes that flank the central bright fringe corresponds to

Note that this value is much greater than the width of the slit.

The width of the central bright fringe is

Notice that this is smaller than the width of the slit

Fraunhofer’s Diffraction at a Double Slit

In Double Slit diffraction experiment, the pattern obtained on the screen is the diffraction pattern due to a single slit on which a system of interference fringes is superposed.By Huygen’s principle every point in the slits AB and CD sends out secondary wavelets in all directions.

From the theory of diffraction at a single slit, the resultant amplitude due to wavelets diffracted from each slit in a direction θ is R =

Consider the two slits as equivalent to two coherent sources placed at the middle points S1 and S2 of the slits and each sending wavelets of amplitude in a directionθ.Consequently, the resultant amplitude at a point P on the screen will be the result of interference between two waves of same amplitude

Therefore the resultant intensity at P is

gives central maximum in the directionθ = 0, having alternate minima and subsidiary maxima of decreasing intensity on either side the minima are obtained in the direction given bysinα = 0⇒ α = ±mπ

Thus the condition of maximum is(b + e)sinθ = ±nλ, where n = 0, 1, 2,....The entire pattern may be considered as consisting of interference fringes due to light from both slits, the intensities of these fringes being governed by the diffraction occurring at the individual slits.

A diffraction grating is an arrangement equivalent to a large number of parallel slits of equal widths and separated from one-another by equal opaque spaces. It is made by ruling a large number of fine, equidistant and parallel lines on an optically plane glass plate with a diamond point. The rulings scatter the light and are effectively opaque while the un-ruled parts transmit light and act as slits.

Let AB be the section of a plane transmission grating, the lengths of the slits being perpendicular to the plane of the paper. Let b be the width of each slit and e the width of each opaque space between the slits, then d = b + e is called the grating element.Let a parallel beam of monochromatic light of wavelength λ be incident normally on the grating. By the theory of Fraunhofer diffraction at a single slit, the wavelets from all points in a slit diffracted in a direction θ are equivalent to a single wave of amplitude

, starting from the middle point of the slit where α =

Thus if N be total number of slits in the grating, the diffracted rays from all the slits are equivalent to N parallel rays, one each from the middle points S1, S2, S3 ... of the slits.Path difference between the rays from the slits S1 and S2 isS2K = S1S2 sinθ = (b + e) sinθThe corresponding phase difference =

Hence the resultant amplitude in the direction θ is R =

The resultant intensity is I = R2 =

as a function of β for N = 5. As the value of N becomes very large, the above function becomes narrow and very sharply peaked at β = 0, π, 2π ....Between the two peaks, the function vanishes when