➤ Decimal Numbers Decimal number system uses ten digits, that is, a system with base of ten. Each of the ten decimal digits, 0 through 9, represents the certain quantity. The position of each of the digits in the decimal number indicates the magnitudes of the quantity represented and can be assigned a “weight”.The value of a decimal number is the sum of the digits times their respective column weights.Example : 23 = 2 × 10 + 3 × 1 = 20 + 3 = 23

➤ Binary NumbersThe binary system with its two digits is a base-two system. The two binary digits (bits) are 1 and 0. The position of the 1 or 0 in a binary number indicates its “weight”. The weight of each successively higher position (to the left) in a binary number is an increasing power of two.Highest decimal number with n bits = 2n − 1For instance, with two bits we can count from 0 through 3 (22 −1 = 3).

The octal numbers we have seen so far have been whole numbers. Fractional octal numbers are represented by digits to the right of the octal point.

The column weights of an octal number are 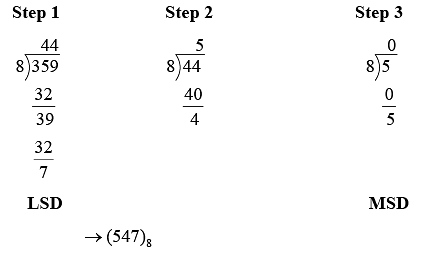 ➤ Hexadecimal NumbersThe hexadecimal system has a base of sixteen; that is, it is composed of 16 digits and characters. Many digital systems process binary data in groups that are multiples of four bits, making the hexadecimal number very convenient because each hexadecimal digit represents a four-bit binary number (as listed in Table 2-2).Ten digits and six alphabetic characters make up this number system. A subscript 16 indicates a hexadecimal number.

➤ Hexadecimal-to-Binary ConversionTo convert from a hexadecimal number to a binary number, reverse the process and replace each hexadecimal symbol with the appropriate four bits.

➤ Hexadecimal-to-Decimal ConversionOne way to evaluate a hexadecimal number in terms of its decimal equivalent is first convert from binary decimal. The following example illustrates this procedure.

Example: Convert the following hexadecimal numbers to decimal.(a) 1C16 (b) A8516

Example: Convert 65010 to hexadecimal by repeated division by 1610. 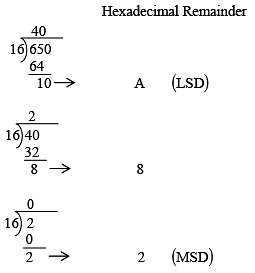 ➤ The InverterThe inverter (NOT circuit) performs a basic logic function called inversion or complementation. The purpose of the inverter is to change one logic level to opposite level. In terms of bits, it changes a 1 to a 0 and a 0 to a 1.Standard logic symbols for the inverter are shown in figure. Figure (a) and (b) show the distinctive shape symbols and parts (c) and (d) show the rectangular outline symbols. In this text, distinctive shape symbols used; however, the rectangular outline symbols are commonly found in industry publications, and you should become familiar with them as well. 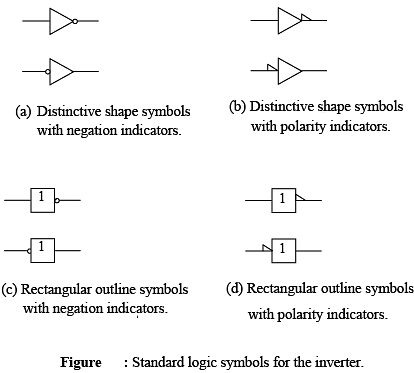 Example: A pulse waveform is applied to an inverter as shown in figure. Determine the output waveform corresponding to the input.

The output waveform is exactly opposite to the input (inverted) at each point.

➤ The AND GateThe AND gate performs logical multiplication, more commonly known as the AND function. The AND gate is composed of two or more inputs and a single output, as indicated by the standard logic symbols shown in figure. Inputs are on the left and the output is on the right in each symbol. Gates with two and four inputs are shown; however, an AND gate can have any number of inputs greater than one.

Figure : Standard logic symbols for the AND gate showing two and four inputs.

➤ The OR Gate  The OR gate performs logical addition, more commonly known as the OR function. An OR gate has two or more inputs and one output, as indicated by standard logic symbols shown in figure where OR gates with two and four inputs are illustrated.

Figure : Standard logic symbols for the OR gate showing two and four inputs.

➤ The NAND Gate  The term NAND is a contraction of NOT-AND and implies an AND function with a complemented (inverted) output. A standard logic symbol for a two-input NAND gate and its equivalency to an AND gate followed by an inverter are shown in figure (a). A rectangular outline representation is shown in part (b).

The NAND gate is very popular logic function because it is a “universal” function; that is, it can be used to construct an AND gate, an OR gate, an inverter, or any combination of these functions. Truth table for a two-input NAND gate. 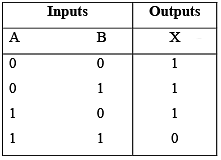 ➤ The NOR Gate  The term NOR is a contraction of NOT-OR and implies an OR function with inverted output. A standard logic symbol for a two input NOR gate and equivalent OR gate followed by an inverter are shown in figure (a). A rectangular outline symbol is shown in part (b).

Figure : Standard NOR gate logic symbols.The NOR gate, like the NAND, is a very useful logic gate because of universal property.

Figure : (a) Positive logic OR Gate (b) Equivalent circuit for analysis.

We can easily verify truth table of AND gate by drawing equivalent circuit in each case.

Figure : Boolean expression for AND functions.

➤ OR  The operation of a two-input OR gate can be expressed in equation form as follows: If one input is A , the other input is B , and the output is X , then the Boolean expression is X = A+B . Figure shows the gate logic symbol, with input and output variables labeled.

Figure : Boolean expressions for OR functions.

. This expression says that the two input variables, A and B , are first ANDed and then complemented, as indicated by the bar over the AND expression.

➤ NOR  Finally, the expression for a two input NOR gate can be written as X =

. This equation says that the two input variables are first O Red and then complemented, as indicated by the bar over the OR expression.

Basic rules that are useful in manipulating and simplifying Boolean algebra expressions are given below:

These theorems are illustrated by the gate equivalencies and truth tables in figure.

Boolean Expressions for Gate NetworksThe form of a given Boolean expression indicates the type of gate network it describes. For example, let us take the expression A ( B +CD ) and determine what kind of logic circuit it represents. First, there are four variables: A, B,C and D . C is ANDed with D , given CD ; then CD is ORed with B , giving ( B + CD ) . Then this is ANDed with A to produce the final function. Figure illustrates the gate network represented by this particular Boolean expression, A (B + CD).

Figure : Logic gate implementation of the expression A (B +CD) .  There are also certain forms of Boolean expressions that are more commonly used than others; the two most important of these are the sum-of-products and the product-of-sum forms.

An important characteristic of the sum-of-products form is that the corresponding implementation is always a two-level gate network; that is, the maximum number of gates through which a signal must pass in going from an input to the output is two, excluding inversions.

➤ Product-of-Sums FormThe product-of-sums form can be thought of as the dual of the sum-of-products. It is, in terms of logic functions, the AND of two or more OR functions. For instance, (A + B) (B+ C) is a product-of-sums expression. Several other examples are

Extensions of the Karnaugh map to three and four variables are shown in figure. Notice that the cells are arranged such that there is only a single variable change between any adjacent cells (this is the characteristic that determines adjacency). 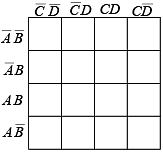 Notice that this expression is already in a sum-of-products form from which the 1s can be plotted very easily, as shown in figure. Four of the 1s appearing in adjacent cells can be grouped. The remaining 1 is absorbed in an overlapping group. The group of four 1s produces a single variable

This is determined by observing that within the group

the only variable that does not change from cell to cell. The group of two 1s produces a two-variable term,

This is determined by observing that within the group, the variables

and C do not change from one cell to the next. To get the minimized function, the two terms that are produced are summed (ORed) as

If all variables and their complements were available, this function would take ten-4-input AND gates and one 10-input OR gate to implement.

A group of eight 1s can be factored as shown in figure because the 1s in the outer columns are adjacent. A group of four 1s is formed by the “wrap-around” adjacency of the cells to pick up the remaining two 1s. The minimum form of the original equation is

takes one   2-input AND gate and one 2-input OR gate. Compare this to the implementation of the original function. 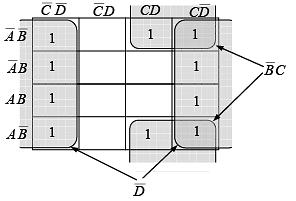 Example: Reduce the following function to its minimum sum-of-products form:

The function is plotted on the four variable map and factored as indicated in figure. Notice that the four corner cells are adjacent. 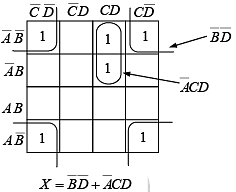 Example: Implement the logic function specified by the truth table using the Karnaugh map method. X is the output variable, and A, B and C are the input variables.The truth table function is plotted and simplified on the map. The logic gate implementation for the resulting sum-of-products expression is shown in part (b) of the figure. 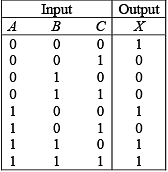 ➤ The Universal Property of the NOR GateAs with the NAND gate, the NOR gate can be used to generate the NOT, AND, OR, and NAND functions.

Example: Determine the output waveform for the circuit in figure (a), with the inputs as shown.

X is shown in the proper time relationship to the inputs in figure (b).

Example: Determine the output waveform for the circuit in figure (a) if the input waveforms are as indicated.