After going through this lesson the student would learn

• The concept of Direct Memory Access• When and where to use DMA?• How to initiate an DMA cycle?• What are the different steps of DMA?• What is a typical DMA controller?

Digital Electronics, Microprocessors 16(I) IntroductionDrect Memory Access (DMA) allows devices to transfer data without subjecting the processor a heavy overhead. Otherwise, the processor would have to copy each piece of data from the source to the destination. This is typically slower than copying normal blocks of memory since access to I/O devices over a peripheral bus is generally slower than normal system RAM. During this time the processor would be unavailable for any other tasks involving processor bus access. But it can continue to work on any work which does not require bus access. DMA transfers are essential for high performance embedded systems where large chunks of data need to be transferred from the input/output devices to or from the primary memory. 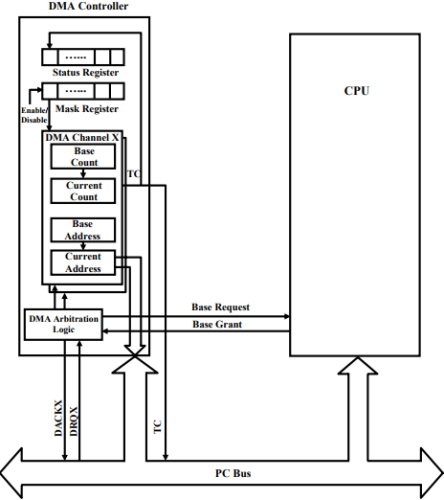 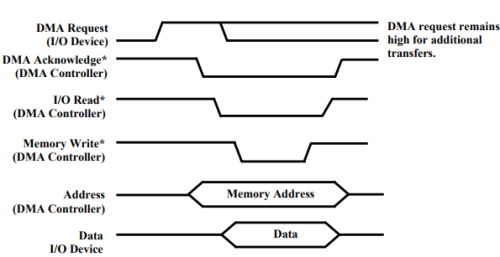 The second type of DMA transfer is referred to as a dual-cycle, dual-address, flowthrough, or fetch-and-deposit DMA transfer. As these names imply, this type of transfer involves two memory or I/O cycles. The data being transferred is first read from the I/O device or memory into a temporary data register internal to the DMA controller. The data is then written to the memory or I/O device in the next cycle. Fig.16.3 shows the fetch-and-deposit DMA transfer signal protocol. Although inefficient because the DMA controller performs two cycles and thus retains the system bus longer, this type of transfer is useful for interfacing devices with different data bus sizes. For example, a DMA controller can perform two 16-bit read operations from one location followed by a 32-bit write operation to another location. A DMA controller supporting this type of transfer has two address registers per channel (source address and destination address) and bus-size registers, in addition to the usual transfer count and control registers.

Unlike the flyby operation, this type of DMA transfer is suitable for both memory-to-memory and I/O transfers.

DMA ControllerOperation For each channel, the DMA controller saves the programmed address and count in the base registers and maintains copies of the information in the current address and current count registers, as shown in Fig.16.1. Each DMA channel is enabled and disabled via a DMA mask register. When DMA is started by writing to the base registers and enabling the DMA channel, the current registers are loaded from the base registers. With each DMA transfer, the value in the current address register is driven onto the address bus, and the current address register is automatically incremented or decremented. The current count register determines the number of transfers remaining and is automatically decremented after each transfer. When the value in the current count register goes from 0 to -1, a terminal count (TC) signal is generated, which signifies the completion of the DMA transfer sequence. This termination event is referred to as reaching terminal count. DMA controllers often generate a hardware TC pulse during the last cycle of a DMA transfer sequence. This signal can be monitored by the I/O devices participating in the DMA transfers. DMA controllers require reprogramming when a DMA channel reaches TC. Thus, DMA controllers require some CPU time, but far less than is required for the CPU to service device I/O interrupts. When a DMA channel reaches TC, the processor may need to reprogram the controller for additional DMA transfers. Some DMA controllers interrupt the processor whenever a channel terminates. DMA controllers also have mechanisms for automatically reprogramming a DMA channel when the DMA transfer sequence completes. These mechanisms include auto initialization and buffer chaining. The auto initialization feature repeats the DMA transfer sequence by reloading the DMA channel's current registers from the base registers at the end of a DMA sequence and re-enabling the channel. Buffer chaining is useful for transferring blocks of data into noncontiguous buffer areas or for handling doublebuffered data acquisition. With buffer chaining, a channel interrupts the CPU and is programmed with the next address and count parameters while DMA transfers are being performed on the current buffer. Some DMA controllers minimize CPU intervention further by having a chain address register that points to a chain control table in memory. The DMA controller then loads its own channel parameters from memory. Generally, the more sophisticated the DMA controller, the less servicing the CPU has to perform. A DMA controller has one or more status registers that are read by the CPU to determine the state of each DMA channel. The status register typically indicates whether a DMA request is asserted on a channel and whether a channel has reached TC. Reading the status register often clears the terminal count information in the register, which leads to problems when multiple programs are trying to use different DMA channels. Steps in a Typical DMA cycle Device wishing to perform DMA asserts the processors bus request signal.

1. Processor completes the current bus cycle and then asserts the bus grant signal to the device.

2. The device then asserts the bus grant ack signal.

3. The processor senses in the change in the state of bus grant ack signal and starts listening to the data and address bus for DMA activity.

4. The DMA device performs the transfer from the source to destination address.

6. Once the DMA operations have been completed, the device releases the bus by asserting the bus release signal.

7. Processor acknowledges the bus release and resumes its bus cycles from the point it left off. 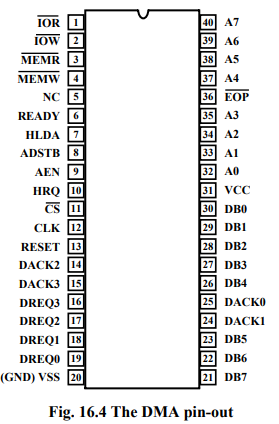 CS: CHIP SELECT: Chip Select is an active low input used to enable the controller onto the data bus for CPU communications.

RESET: This is an active high input which clears the Command, Status, Request, and Temporary registers, the First/Last Flip-Flop, and the mode register counter. The Mask register is set to ignore requests. Following a Reset, the controller is in an idle cycle.

READY: This signal can be used to extend the memory read and write pulses from the 82C37A to accommodate slow memories or I/O devices.

HLDA: HOLD ACKNOWLEDGE: The active high Hold Acknowledge from the CPU indicates that it has relinquished control of the system busses.

DREQ0-DREQ3: DMA REQUEST: The DMA Request (DREQ) lines are individual asynchronous channel request inputs used by peripheral circuits to obtain DMA service. In Fixed Priority, DREQ0 has the highest priority and DREQ3 has the lowest priority. A request is generated by activating the DREQ line of a channel. DACK will acknowledge the recognition of a DREQ signal. Polarity of DREQ is programmable. RESET initializes these lines to active high. DREQ must be maintained until the corresponding DACK goes active. DREQ will not be recognized while the clock is stopped. Unused DREQ inputs should be pulled High or Low (inactive) and the corresponding mask bit set.

DB0-DB7: DATA BUS: The Data Bus lines are bidirectional three-state signals connected to the system data bus. The outputs are enabled in the Program condition during the I/O Read to output the contents of a register to the CPU. The outputs are disabled and the inputs are read during an I/O Write cycle when the CPU is programming the 82C37A control registers. During DMA cycles, the most significant 8-bits of the address are output onto the data bus to be strobed into an external latch by ADSTB. In memory-to-memory operations, data from the memory enters the 82C37A on the data bus during the read-from-memory transfer, then during the write-to-memory transfer, the data bus outputs write the data into the new memory location.

EOP: END OF PROCESS: End of Process (EOP) is an active low bidirectional signal. Information concerning the completion of DMA services is available at the bidirectional EOP pin. The 82C37A allows an external signal to terminate an active DMA service by pulling the EOP pin low. A pulse is generated by the 82C37A when terminal count (TC) for any channel is reached, except for channel 0 in memory-to-memory mode. During memory-to-memory transfers, EOP will be output when the TC for channel 1 occurs. The EOP pin is driven by an open drain transistor on-chip, and requires an external pull-up resistor to VCC. When an EOP pulse occurs, whether internally or externally generated, the 82C37A will terminate the service, and if auto-initialize is enabled, the base registers will be written to the current registers of that channel. The mask bit and TC bit in the status word will be set for the currently active channel by EOP unless the channel is programmed for autoinitialize. In that case, the mask bit remains clear.

A0-A3: ADDRESS: The four least significant address lines are bidirectional three-state signals. In the Idle cycle, they are inputs and are used by the 82C37A to address the control register to be loaded or read. In the Active cycle, they are outputs and provide the lower 4-bits of the output address.

A4-A7: ADDRESS: The four most significant address lines are three-state outputs and provide 4-bits of address. These lines are enabled only during the DMA service.

HRQ: HOLD REQUEST: The Hold Request (HRQ) output is used to request control of the system bus. When a DREQ occurs and the corresponding mask bit is clear, or a software DMA request is made, the 82C37A issues HRQ. The HLDA signal then informs the controller when access to the system busses is permitted. For stand-alone operation where the 82C37A always controls the busses, HRQ may be tied to HLDA. This will result in one S0 state before the transfer.

DACK0-DACK3: DMA ACKNOWLEDGE: DMA acknowledge is used to to notify the individual peripherals when one has been granted a DMA cycle. The sense of these lines is programmable. RESET initializes them to active low.

ADSTB: ADDRESS STROBE: This is an active high signal used to control latching of the upper address byte. It will drive directly the strobe input of external transparent octal latches, such as the 82C82. During block operations, ADSTB will only be issued when the upper address byte must be updated, thus speeding operation through elimination of S1 states. ADSTB timing is referenced to the falling edge of the 82C37A clock.

NC: NO CONNECT: Pin 5 is open and should not be tested for continuity.