The document Directive Principles Of State Policy (Part -3) Notes | EduRev is a part of the UPSC Course Indian Polity for UPSC CSE.
All you need of UPSC at this link: UPSC 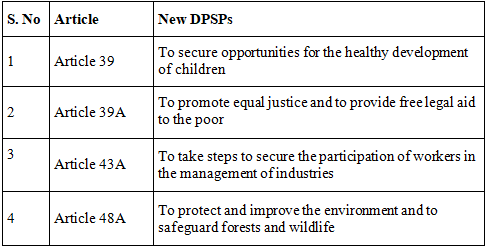 To read more on the 42nd Amendment Act, 1976, aspirants may check the linked article.

86th AmendmentThe 86th Amendment changed the subject of Article 45 in the DPSP and brought it within the ambit of the fundamental rights mentioned in Part III as Article 21-A has been made for the children between the age group of 6-14 years of age. The same article was previously a directive principle which says that the State should take care of the children who are below 6 years of age.

97th AmendmentThe 97th Amendment act of 2011 inserted Article 43-B in the list of DPSP. It says that the State shall endeavour to promote voluntary formation, autonomous functioning, democratic control and professional management of the co-operative societies.

Enforceability of DPSPDPSP were not made enforceable by the Constituent Assembly which was formed to draft the Indian Constitution. But the non-enforceability of the Principles does not mean that they are of no importance.

There are some arguments which are in favor of its enforceability and some are against the making of DPSP enforceable. Those who favor the enforcement of the Principles argue that enforceability of DPSPs will keep a check on the Government and would unite India. For instance, Article 44 of the Indian Constitution talks about the Uniform Civil Code which aims for uniform provisions of civil law for all the citizens of the country irrespective of their caste, creed, religion or beliefs.

People who are against the enforcement of the DPSPs are of the view that these principles need not be separately enforced as there are already many laws which indirectly implements the provisions mentioned in DPSP. For instance, Article 40 of the Constitution which deals with Panchayati Raj system was introduced through a constitutional amendment, and it is very evident that there are numerous panchayats exist in the country today.

Another argument against DPSP is that it imposes morals and values on the citizens of the country. It should not be clubbed with the law as it is really important to grasp that law and morals area unit various things. If we impose one on the opposite that will generally impede the expansion and development of the society.

Importance of DPSPDPSP covers the Articles 36-51 in Part IV of the constitution.

It mentions protection of women of the country, environmental conservation, rural growth and development, decentralisation of power, uniform civil code, etc. which are considered some of the essentials in making laws for a “welfare state”.

Although non-justiciable, they provide a set of guidelines for the Government for its functioning in the country.

Thus, the inclusion of Part IV which contains the Directive Principles of State Policy proved to be very useful for the country. The Directive Principles provide good foundations for welfare state. The securing of Directive Principles helped in completing the requirements of a democratic system. It supplemented the Fundamental Rights of the people and built a State characterized by these four pillars – Justice, Liberty, Equality, and Fraternity.

Fundamental Rights apply to all the citizens without any form of discrimination on the basis of race, caste, creed, sex, place of birth, etc. Violation of the fundamental rights may lead to punishment and can initiate proceedings against the government if it tries to curtail them.

The Indian Constitution recognizes 7 fundamental rights, they are as follows:

Directive Principles of State Policy are some important guidelines given to the government so that it can work accordingly and refer to them while formulating the laws and policies, and to build a just society.

These principles are mentioned in Part IV from Article 36 to 51 of the Constitution.

Directive Principles are non-justiciable. However, these are recognized as an important roleplayer in governing the State. These principles aim at creating such an environment, which can help the citizens to live a good life where peace and harmony prevails.

The directive principles conjointly gauge the performance of the state, in order to achieve the objectives stated in the preamble of the Indian Constitution.

Comparison between DPSP and Fundamental rights 1. It has no legal force2. It is illogically arranged3. It is conservative in nature4. It may produce constitutional conflict between centre and state.

What is the conflict between Fundamental Rights & DPSPs?

Result: Through the 42nd amendment act, Parliament extended the scope of the first provision of Article 31C. It accorded the position of legal primacy and supremacy to the Directive Principles over the Fundamental Rights conferred by Articles 14, 19 and 31.