We shall now discuss stochastic TCA models (i.e., these are probabilistic CAs) that allow for the spontaneous emergence of phantom jams. All these models explicitly incorporate a stochastic term in their equations, in order to accomplish this kind of real-life behaviour.

In 1992, Nagel and Schreckenberg proposed. A TCA model that was able to reproduce several characteristics of real-life traffic flows, e.g., the spontaneous emergence of traffic jams. Their model is called the NaSch TCA, but is more commonly known as the stochastic traffic cellular automaton (STCA). It explicitly includes a stochastic noise term in one of its rules, which we present in the same fashion as those of the previously discussed deterministic TCA models. The space is divided into cells (cell may contain vehicle or can be empty). The length of a cell is the minimum space headway available between vehicles in times of jam, and numerically it is reciprocal of jam density and is set to 7.5 m( Kj=133veh/km).

The STCA then comprises the following three rules (note that in Nagel and Schreckenberg’s original formulation, they decoupled acceleration and braking, resulting in four rules). Here we shall discuss about the NaSch model based upon its rules. There are four rules, mainly rules for acceleration, rules of deceleration, rules for randomization and lastly the vehicle updation step.

This step reflects the general tendency of the drivers to drive as fast as possible without crossing the maximum speed limit. If the present speed is smaller than the desired maximum speed, the vehicle is accelerated. The desired speed vmax can be assumed to be distributed by a statistical distribution function where the values of vmax are only allowed to be 1, 2,..., 5 cell/∆t.

This step ensures that the driver doest collide with any vehicle ahead of him so that deceleration is applied to those vehicles which may collide. If the present speed is larger than the gap in the front, set v = gap. This rule avoids rear end collisions between vehicles. Note that here a very unrealistic braking rule allowing for arbitrarily large decelerations is involved. This rule forces minimum time headway of ∆t s.

This rule introduces a random element into the model. This randomness models the uncertainties of driver behavior, such as acceleration noise, inability to hold a fixed distance to the vehicle ahead. Fluctuations in maximal speed, and assign different acceleration values to different vehicles. If present velocity of a vehicle is greater than zero then the velocity of the vehicle reduces by a single unit with a probability Pbrake. This rule has no theoretical background and is introduced quite heuristically.

After the above three steps the position of vehicles are updated according to their respective velocities. Even changing the precise order of the steps of the update rules stated above would change the properties of the model.

Assume a single lane stretch road divided into 8 cells and vehicles are present in the first, third, sixth, seventh cells with 2, 1, 1, 0 as their velocities respectively. Apply the rules of cellular automata.

Solution Apply the CA rules (equation. 20.5 - 20.8) in a sequential way as per the requirements of acceleration, deceleration, randomization and vehicle updation. The rules are applied step wise as shown below.

Step 2: Deceleration stage ( according to equation. 20.6)

In this step the vehicle decelerates if it doest find enough gap ahead of it in its lane. The new velocity of the first vehicle is 3 where as the gap ahead of it 2 so it needs to decelerate by an amount of gap minus one i.e., (2-1)=1.

Step 3: Randomization stage ( according to equation. 20.7)

This step is generally a randomly applied rule for a particular number of vehicles in a set of total n vehicles. This number depends upon the probability ratio p that the user defines. But in our case as we are working with a limited number of vehicles so we cannot use the probability function so for the simplicity of the rule we shall apply this rule ( additional deceleration) to all the those vehicles which undergo deceleration stage. So in our case the first vehicle undergoes randomization stage and acquires a new velocity of 0.

The velocity of the first vehicle after undergoing the three rules has been reduced from two to zero, so the position of the vehicle is not changed in the next time step.

• First vehicle : Xn = 1 + 0 = 1 Similarly applying the rule to the rest of the vehicles in the same way will obtained the following results as below.

The figure below gives the reader a clear overview if all the four stages at a glance. 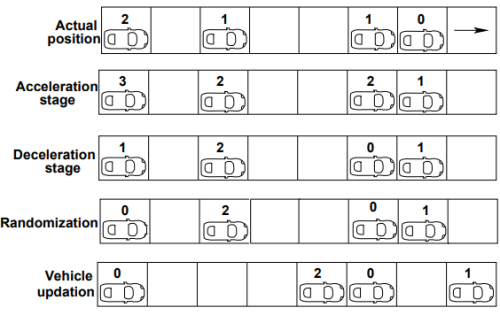 • So, two lane models are introduced to meet the requirement and four more additional rules are included for the exchange of vehicles between the lanes.

The presence of such vehicles will result in platooning effect. The generic two lane model is the combination of two parallel single lane models with periodic boundary conditions with some additional rules as stated in the below sections. The update step is split into two sub-steps. In first sub-step the exchange of vehicles in the two lanes, take place according to the new rule set. Vehicles are moved only sideways. They do not advance in one go. However, in reality this does not happen and this is step is also not seen. This step has a meaning when it is coordinated with the second step. In the second step, the independent single-lane updates on both lanes according to the single lane update rules.

Nagatani has formulated an oversimplified model for two-lane traffic. There are some assumptions in this model, one of which is that the maximum allowable speed of each vehicle is identical. Therefore, the model turns out to be a homogeneous type model and hence cannot explain heterogeneous traffic consisting of different types of vehicles. Some of the notations, which will be used to indicate the gaps in the lanes, are

In a two lane model proposed by Rickert, a vehicle changes its lane with a probability p, provided there is not enough gap in the current lane in front of the vehicle, if the gap in the front of the vehicle in the target lane is adequate, if it is possible without collision and finally when the lane changing activity doesn’t block someone else’s way. The above sentences are formulated in form of rules from equations. 20.9 to 20.11

• The vehicle does not find enough gap in its current lane ahead of it.

• The gap in the target lane ahead of it is adequate.

• No collision takes place (i.e.,The cell where the vehicle is intending to change should be empty) • It should not block some others way

Rules 9 and 10 are called the trigger criterion and the rule 11 is called the safety criterion. These rules are applicable for both left to right and right to left lane changes and it changes the lane with probability.