Assume a two-lane road divided into nine cells in each of its lane. In first lane vehicles are present in first (1), third (1), fourth (2), eight (1) cells and in second lane vehicles are present in fifth (1) and sixth (1) cells. The numbers in the brackets indicate the present velocities of the respective velocities. Apply the lane changing rules and determine which vehicles fulfilled the lane changing requirements.

Rule 3: No collision of vehicles is observed as per the pattern given.

In real world traffic the vehicles dont have unique velocities but it was an assumption in the model. So the vehicles are further divided into two types of different Vmax, namely Vfmax, Vsmax, corresponding to fast vehicles and a slow vehicles. Introduction of “symmetric two lane model” for inhomogeneous traffic.

There are two types

Sequential update : This updating procedure considers each cell in the lattice one at a time. If all cells are considered consecutively, two updating directions are possible, left-to-right and right-to-left. There is also a third possibility, called random sequential update. Under this scheme and with N particles in the lattice, each time step is divided in N smaller sub steps.

At each of these sub steps, a random cell (or vehicle) is chosen and the CA rules are applied to it.

Parallel update: This type of update is the classic update procedure generally used in all the models. For a parallel update, all cells in the system are updated in one and the same time step. Compared to a sequential updating procedure, this one is computationally more efficient (note that it is equivalent to a left-to-right sequential update).

The Fig. 20:6 shows the updation without randomization and the Fig. 20:7 is with randomization where an extra deceleration is observed in second vehicle and then updation.

The simple exclusion process is a simplified well-known particle transport model from nonequilibrium statistical mechanics, defined on a one-dimensional lattice. In the case of open boundary conditions (i.e., the bottleneck scenario), particles enter the system from the left side at an entry rate α , move through the lattice, and leave it at an exit rate β. The term ‘simple The above Fig. 20:9 gives a differentiation between four types of models and interestingly it is observed that the TASEP with Vmax = 1 has a trend of the Greenshield model and following a 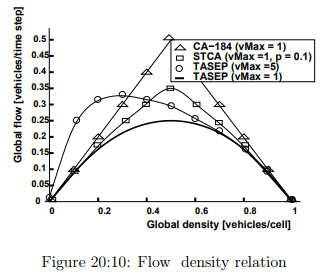 linearity in the speed-density relation. The same trend is also observed in the below Fig. 20:10 flow density curve.