The document Theorem Physics Notes | EduRev is a part of the Physics Course Basic Physics for IIT JAM.
All you need of Physics at this link: Physics

The divergence theorem, more commonly known especially in older literature as Gauss's theorem (e.g., Arfken 1985) and also known as the Gauss-Ostrogradsky theorem, is a theorem in vector calculus that can be stated as follows. Let V be a region in space with boundary

of V are related by

The divergence theorem is a mathematical statement of the physical fact that, in the absence of the creation or destruction of matter, the density within a region of space can change only by having it flow into or away from the region through its boundary.

A special case of the divergence theorem follows by specializing to the plane. Letting S be a region in the plane with boundary

, equation (1) then collapses to

If the vector field F satisfies certain constraints, simplified forms can be used. For example, if F (x,y,z,)=v(x,y,z)c where c is a constant vector ≠0, then

But c≠0  and c.f(v) must vary with v so that c.f(v) cannot always equal zero. Therefore,

We know that there is always a static electric field around a positive or negative electrical charge and in that static electric field there is a flow of energy tube or flux. Actually this flux is radiated/emanated from the electric charge. Now amount of this flow of flux depends upon the quantity of charge it is emanating from. To find out this relation, the Gauss’s theorem was introduced. This theorem can be considered as one of the most powerful and most useful theorem in the field of electrical science. We can find out the amount of flux radiated through the surface area surrounding the charge from this theorem. 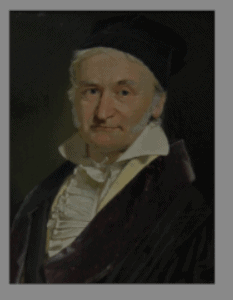 This theorem states that the total electric flux through any closed surface surrounding a charge, is equal to the net positive charge enclosed by that surface.

Suppose the charges Q1, Q2_ _ _ _Qi, _ _ _ Qn are enclosed by a surface, then the theorem may be expressed mathematically by surface integral as

Where, D is the flux density in coulombs/m2 and dS is the outwardly directed vector.

For explaining the Gauss’s theorem, it is better to go through an example for proper understanding. 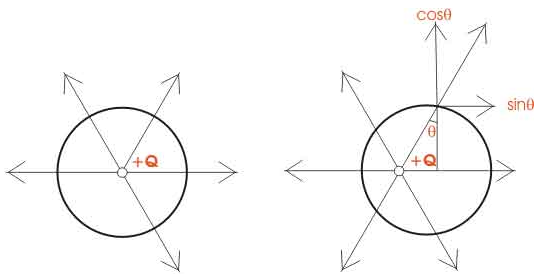 At that time, the flux lines are not normal to the surface surrounding the charge, then this flux is resolved into two components which are perpendicular to each other, the horizontal one is the sinθ component and the vertical one is the cosθ component. Now when the sum of these components is taken for all the charges, then the net result is equal to the total charge of the system which proves Gauss’s theorem.

Let us consider a point charge Q located in a homogeneous isotropic medium of permittivity ε.

The flux density is given as,

Now from the figure the flux through area dS

Where, θ is the angle between D and the normal to dS.Now, dScosθ is the projection of dS is normal to the radius vector. By definition of a solid angle

Where, dΩ is the solid angle subtended at Q by the elementary surface are dS. So the total displacement of flux through the entire surface area is

Now, we know that the solid angle subtended by any closed surface is 4π steradians, so the total electric flux through the entire surface is

This is the integral form of Gauss’s theorem. And hence this theorem is proved.

For ω a differential (k-1)-form with compact support on an oriented K-dimensional manifold with boundary M,

where dω is the exterior derivative of the differential form ω. When M is a compact manifold without boundary, then the formula holds with the right hand side zero.

Stokes' theorem connects to the "standard" gradient, curl, and divergence theorems by the following relations. If f is a function on R3,

where c:R3 →R3 (the dual space) is the duality isomorphism between a vector space and its dual, given by the Euclidean inner product on R3. If f is a vector field on a R3,

where * is the Hodge star operator. If f is a vector field on R3,

With these three identities in mind, the above Stokes' theorem in the three instances is transformed into the gradient, curl, and divergence theorems respectively as follows. If f is a function on R3 and ϒ is a curve in R3, then

which is the gradient theorem. If f:R3→R3 is a vector field and M an embedded compact 3-manifold with boundary in R3, then

which is the divergence theorem. If f is a vector field and M is an oriented, embedded, compact 2-manifold with boundary in R3, then

which is the curl theorem.

de Rham cohomology is defined using differential k-forms. When N is a submanifold (without boundary), it represents a homology class. Two closed forms represent the same cohomology class if they differ by an exact form, ω1, ω2 =dn. Hence,

Therefore, the evaluation of a cohomology class on a homology class is well-defined. Physicists generally refer to the curl theorem

A special case of Stokes' theorem in which F is a vector field and M is an oriented, compact embedded 2-manifold with boundary in R3, and a generalization of Green's theorem from the plane into three-dimensional space. The curl theorem states

where the left side is a surface integral and the right side is a line integral.There are also alternate forms of the theorem. If

The document Theorem Physics Notes | EduRev is a part of the Physics Course Basic Physics for IIT JAM.
All you need of Physics at this link: Physics
All Tests, Videos & Notes of Physics: Physics