The document Diversity in living organisms Chapter Notes, Class 9, Science Class 9 Notes | EduRev is a part of Class 9 category.
All you need of Class 9 at this link: Class 9

Biodiversity: The variety of living beings found in geographical area is called biodiversity of that area. Amazon rainforests is the largest biodiversity hotspot in the world.

Need for Classification: Classification is necessary for easier study of living beings. Without proper classification, it would be impossible to study millions of organisms which exist on this earth.

Some examples of scientific bases of classification are as follows:

Organization of nucleus: Nucleus may or may not be organized in an organism. On this basis, organisms can be divided into two groups, viz. prokaryotes and eukaryotes.

(a) Prokaryotes: When nucleus is not organized, i.e. nuclear materials are not membrane bound; the organism is called prokaryote.

(b) Eukaryotes: When nucleus is organized, i.e. nuclear materials are membrane bound; the organism is called eukaryote.

Mode of Nutrition: On this basis, organisms can be divided into two broad groups, i.e. autotrophs and heterotrophs. An autotroph makes its own food, while a heterotroph depends on other organisms for food.

Classification and Evolution: It is a well established fact that all the life forms have evolved from a common ancestor. Scientists have proved that the life begun on the earth in the form of simple life forms. During the course of time, complex organism evolved from them. So, classification is also based on evolution. A simple organism is considered to be primitive while a complex organism is considered to be advanced.

This is the most accepted system of classification. The five kingdoms and their key characteristics are given below:

1. Monera: These are prokaryotes; which means nuclear materials are not membrane bound in them. They may or may not have cell wall. They can be autotrophic or heterotrophic. All organisms of this kingdom are unicellular. Examples: bacteria, blue green algae (cyanobacteria) and mycoplasma. 2. Protista: These are eukaryotes and unicellular. Some organisms use cilia or flagella for locomotion. They can be autotrophic or heterotrophic. Examples: unicellular algae, diatoms and protozoans. 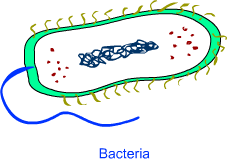 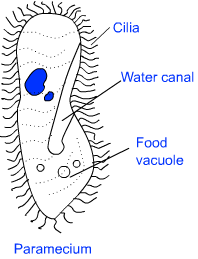 3. Fungi: These are heterotrohic and have cell wall. The cell wall is made of chitin. Most of the fungi are unicellular. Many of them have the capacity to become multicellular at certain stage in life. They feed on decaying organic materials. Such a mode of nutrition is called saprophytic. Some fungi live in symbiotic relationship with other organisms, while some are parasites as well. Examples: yeast, penicillum, aspergillus, mucor, etc.

4. Plantae: These are multicellular and autotrophs. Presence of chlorophyll is a distinct characteristic of plants, because of which they are capable of doing photosynthesis. Cell wall is present.

5. Animalia: These are multicellular and heterotophs. Cell wall is absent.

The Plant Kingdom can be further classified into five divisions. Their key characteristics are given below:

2. Bryophyta:- Plant body is differentiated into stem and leaf like structure. Vascular system is absent, which means there is no specialized tissue for transportation of water, minerals and food. Bryophytes are also known as the amphibians of the plant kingdom, because they need water to complete a part of their life cycle. Examples: Moss, marchantia.

(a) Monocotyledonous: There is single seed leaf in a seed. A seed leaf is a baby plant. Examples: wheat, rice, maize, etc.

(b) Dicotyledonous: There are two cotyledons in a seed. Examples: Mustard, gram, mango, etc.

The animal kingdom is classified into different phyla. Their detail is given below:

1. Porifera: These animals have pores all over their body. The pores lead into the canal system. Water flows through the canal system and facilitates entry of food and exchange of other materials. The animal is not differentiated into tissues. The body is covered with a hard outer skeleton. These are commonly known as sponges. They are marine animals. Examples: Sycon, spongilla, euplectelea, etc.

2. Coelenterata: The body is made up of a coelom (cavity) with a single opening. The body wall is made up of two layers of cells (diploblastic). Some of the species live a solitary life while others live in colonies. Examples: Hydra, Jelly fish, Sea anemone, etc.

3. Platyhelminthes: The body is flattened from top to bottom and hence the name platyhelminthes. These are commonly known as flatworms. The body wall is composed of three layers of cells (triploblastic). Because of three layers, it is possible to form some organs as well. But a proper ceolom is absent in platyhelminthes and hence proper organs are absent. They are free-living or parasitic animals. Examples: Planaria, liver fluke, tapeworm, etc.

4. Nematohelminthes: The body is bilaterally symmetric and there are three layers in the body wall. Animals are cylindrical in shape. A pseudocoelom is present and hence organs are absent. Examples: Roundworms, pinworms, filarial parasite (Wuchereria), etc.

5. Annelida: True body cavity is present in these animals. The body is divided into segments and hence the name annelida. Each segment is lined one after another and contains a set of organs. Examples: Earthworm, leech, etc.

6. Arthropoda: Animals have jointed appendages which gives the name arthropoda. Exoskeleton is present which is made of chitin. This is the largest group of animals; in terms of number of species. Circulatory system is open, which means blood flows in the coelomic cavity. Examples: cockroach, housefly, spider, prawn, scorpion, etc.

7. Mollusca: The animal has soft body; which is enclosed in a hard shell. The shell is made of calcium carbonate. Circulatory system is open and kidney like organ is present for excretion. The body has well developed muscular feet for locomotion. Examples: Snail, mussels, octopus, etc.

8. Echinodermata: The body is covered with spines, which gives the name echinodermata. Body is radially symmetrical. The animals have well developed water canal system, which is used for locomotion. Skeleton is made of calcium carbonate. Examples: Starfish, sea urchins, etc.

9. Protochordata: Animals are bilaterally symmetrical, triploblastic and ceolomate. Notochord is present at least at some stages of life. Notochord is a long rod-like structure which runs along the back of the animal. This provides attachment points for muscles. It also separates the nervous tissues from the gut. Examples: Balanoglossus, herdmania, amphioxus, etc.

The notochord is replaced by a spinal column during embryonic stage. Following are the main characteristics of vertebrates.

A. Pisces: They are commonly known as fish. The body is streamlined. Muscular tail is present which assists in locomotion. Body is covered with scales. Paired gills are present; which can breathe oxygen dissolved in water. They are cold-blooded animals. The heart has only two chambers. They lay eggs. Fishes can be bony or cartilaginous. Shark is an example of cartilaginous fish. Rohu and katla are examples of bony fish.

B. Tetrapoda: Animals have four limbs for locomotion and hence the name tetrapoda. Tetrapoda is divided into four classes, viz. amphibia, reptilia, aves and mammalia.

(1) Amphibia: These animals are adapted to live both in water and land. Mucus glands on skin keep the skin moist. The animals breathe through skin when in water and through lungs when on land. The heart has three chambers. These are cold blooded animals. Examples: Frog, toad, salamander, etc.

(2) Reptilia: These animals show crawling movement for locomotion. Skin is hardened to form scales. Most of the reptilians have three chambered heart but crocodile has four-chambered heart. They don’t need water to lay eggs, rather eggs are covered with hard shells and laid on land. Examples: snakes, lizards, crocodile, turtle, etc.

(3) Aves: The body is covered with feathers. Forelimbs are modified into wings. These are warm-blooded animals. The heart has four chambers. Bones are hollow (pneumatic); which assists in flying. All the birds belong to this class.

I HOPE YOU GUYS UNDERSTOOD
THANK :)