The document Diversity in living organisms Notes - Class 9 is a part of Class 9 category.
All you need of Class 9 at this link: Class 9

Question.3 What are species ? State in terms of (1) hierarchy of classifications and (2) in relation to reproduction. [SAII -2014]Answer.

Question.4 What are Cryptogams ? Why are they called so ?Answer. Thallophytes, Bryophytes and Pteridophytes are classified as Cryptogams as they have hidden reproductive organs.

Question.6 Differentiate between Bryophyta and Pteridophyta. Give one example of each.Answer.

Question.7 Prawn, housefly and spider belong to one group.

(i) Name the group.(ii)Justify the name given to this group.Answer.(i) Arthropoda.(ii) They have jointed legs. The word ‘arthropod’ means jointed legs.

Question.11 Give two features of Pisces.Answer.

Question.2 Make a table to differentiate between Monera and Fungi on the following basis:(а) Prokaryotic/Eukaryotic(b) Cell wallAnswer.

Question. 3 Study the figure and Answer the following questions:

Question.8 Tabulate the following features and compare Reptilia, Aves and Mammalia:(a) Exoskeleton (b) Number of chambers in heart [SAII – 2014]Answer.

Question.9 Write appropriate terms for the following:(a) Animals that are able to maintain a certain body temperature over a wide range of temperature in the environment.(b) Plants which bear naked seed.(c) Animals which have pseudocoelom.Answer. (a) Warm-blooded animal, (b) Gym nosperms, (c) Nematoda.

Question.12 Which organisms are called primitive and how are they different from the so-called advanced organisms ? [SAII – 2011]Answer.

Question.13 How are pteridophytes different from the phanerogams? [SAII-2011]Answer.

Question.14 How do gymnosperms and angiosperms differ from each other ? [SAII -2011]Answer.

In this way, we can build-up a whole hierarchy of mutually related characteristics to be used for classification.

Question.16 How are the criteria for deciding divisions in plants different from the criteria for deciding the subgroups among animals ?Answer. The characteristics of body design used for classification of plants will be very different from those important for classifying animals. This is because the basic designs are different, based on the need to make their own food (plants) or acquire it (animals). Therefore, these design features (having a skeleton) are to be used to make subgroups, rather than making broad groups.

5 MARKS QUESTIONSQuestion.1 X, Y and Z are living organisms.(a) Identify the group to which they belong on the basis of following features. .(i) X — Microscopic, unicellular, prokaryotic.(ii) Y — Microscopic, unicellular, eukaryotic, and shows locomotion with the help of pseudopodia/flagella.(iii) Z — Multicellular, filamentous, eukaryotic, autotrophic and aquatic.(b) Which amongst the above is most advanced ?(c) Name one organism each belonging to the groups of X, Y and Z. [SAII-2014]Answer.(a) (i) Monera, (ii) Protista, (iii) Plantae (Thallophyta)(b) Fungi are most advanced organisms as compared to Protista and Monera.(c) X — BacteriaY — AmoebaZ —Spirogyra.

Question.3 (a) Why are angiosperms so called ? In which structures do the seeds develop ? Why are cotyledons considered an important part of seed ?(b) Differentiate between the two categories of angiosperms giving an example of each. [SAII – 2014]Answer.(a) Angiosperms are so called because these plants have covered seeds.Seeds develop within ovary which later modify into fruit.Cotyledons are considered an important part of seed as these are seed leaves. In many instances, they emerge and become green when the seed germinates.(b) The angiosperms are divided into two categories depending upon the number of cotyledons present in the seeds:(i) Monocot — Plants having single cotyledon, e.g., Paphiopedilum, maize.(ii) Dicot — Plants having two cotyledons, e.g., Ipomoea, sunflower.

Question.4(a) Identify the organism shown in the picture and write the common name and scientific name of the organism.(b) Name its phylum and kingdom.(c) Which organ of digestive system normally harbours this organism ? 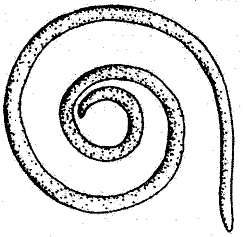 Answer.(a) It is Ascaris.Common name is Roundworm.Scientific name is Ascaris lumbricoides.(b) Phylum — Nematoda and Kingdom-Animalia.(c) Small intestine (an organ of digestive system) normally harbours this organism.

Question.5(a) Identify three features possessed by all chordates.(b) Name the classes of vertebrates which have the following characteristics:(1) Animals that have streamlined body and gills for breathing.(2) Animals that are found both on land and in water.(3) Animals that have mammary glands for the production of milk to nourish their young ones.Answer.(a) Features of chordates:

Question.6 What is the criterion for classification of organisms as belonging to kingdom Monera or Protista? [SAII – 2011]Answer.Criterion for classification of organisms belonging to kingdom Monera:(i) These organisms do not have a defined nucleus or organelles, nor do any of them show multicellular body designs.(ii) Some of them have cell walls while some do not have.The mode of nutrition of organisms in this group can be either by synthesizing their own food (autotrophic) or getting it from the environment (heterotrophic).(iv) This group includes bacteria, blue-green algae or cyanobacteria and mycoplasma.Criterion for classification of organisms belonging to kingdom Protista:(i) This group includes many kinds of unicellular eukaryotic organisms.(ii) Some of these organisms use appendages, such as hair-like cilia or whip-like flagella for moving around.(iii) Their mode of nutrition can be autotrophic or heterotrophic.(iv) This group includes unicellular algae, diatoms and protozoans.

Question.8 How do annelid animals differ from arthropods ? [SAII -2014]Answer.

Question.9 What are the differences between amphibians and reptiles ? [SAII – 2011]Answer.

Question.10 What are the differences between animals belonging to the Aves group and those in the Mammaliagroup ? [SAII- 2011]Answer.

Question.11 What are the advantages of classifying organisms ?Answer. The importance of classification is :

The science of classification thus contributes to a larger extent in advancing knowledge inmost of the other disciplines of biology.

Question.12 What are the major divisions in the plantae ? What is the basis for these divisions ? [SAII – 2014]Answer.The major divisions in the kingdom plantae are :(i) Thallophyta (ii) Bryophyta(iii) Pteridophyta (iv) Gymnosperms(v) Angiosperms.The basis of these divisions are :(a) Whether the plant body has well differentiated, distinct components.(b) Whether the differentiated plant body has special tissues for the transport of water and other substances within it.(c) The ability to bear seeds.(d) Whether the seeds are enclosed within fruits.

Question.1 Distinguish between the following:(a) Fungi and Plantae on the basis of nutrition.(b) Gymnosperms and Angiosperms on the basis of fruits. [SAII-2014]Answer. (a) Fungi shows heterotrophic mode of nutrition /.e., they cannot prepare their food while Plantae are autotrophs i.e., they prepare their own food by the process of photosynthesis.(b) Gymnosperms bear naked seeds while Angiosperms have seeds which develop inside an organ which later modifies into a fruit.

Question.2 A plant specimen was found without differentiated roots. ‘(a) Which plant structure helps in attaching this plant to the substratum ?(b) To which group you will keep this plant ?(c) Which plant could it be ?Answer. (a) Thallus, (b) Thallophyta, (c) Algae.

Question.4 Protochordates possesses a notochord in larval forms. Appraise the use of this feature in these animals. :Answer. The notochord is a long rod-like support structure (chord = string) that runs along the back of the animal separating the nervous tissue from the gut. It provides a place for muscles to attach for ease of movement.

Question.16 Why do we keep both snake and turtle in the same class ?Answer.Because both are:(1) cold-blooded(2) have scales(3) breathe through lungs(4) have three chambered fjeart and(5) they lay eggs with tough covering.

Question.2 You are provided with the seeds of gram, wheat, rice, pumpkin, maize and pea. Classify them whether they are monocot or dicot.Answer.Gram-dicot Wheat-monocotRice-monocot Pumpkin-dicotMaize-monocot Pea-dicOt

Question.3 Define the terms and give one example of each:(a) Bilateral symmetry (b) Coelom (c) TriploblasticAnswer.(a) The left and right halves of the body have the same design, e.g. Liver fluke.

(b) Coelom is the internal body cavity between visceral organs and body wall in which well developed organs can be accommodated, e.g., butterfly.(c) Animals having three layers of cells from which differentiated tissue can be made are called triploblastic, e.g., starfish.

Question.4 You are given Leech, Nereis, Scolopendra, Prawn and Scorpion; and all have segmented body organisation. Will you classify them in one group ? If no, give the important characters based on which you will separate these organisms into different groups. ‘Answer. All organisms given in the question do not belong to same group. Leech and Nereis belong to phylum annelida because they have metamerically segmented body, i.e., body is divided into many segments internally by septa. Body segments are lined up one after the other from head to tail. But Scolopendra, prawn and scorpion belong to phylum arthropoda as these have jointed legs and open circulating system.

Question.5 Which organism is more complex and evolved among Bacteria, Mushroom and Mango tree ? Give reasons.Answer. Mango tree is more complex and evolved because, it is eukaryotic, autotrophic, terrestrial sporophyte with covered seed. The bacteria is unicellular prokaryote and fungi are the heterotrophic, simple thallophyte with no tissue systems –

Question.6 Differentiate between flying lizard and bird. Draw their diagram.Answer.Flying lizard belongs to group reptiles and characterised as cold-blooded, body covered with scales and having three chambered heart, while Birds belong to group aves and have characteristics of being warm-blooded, having feather covered body, fore limbs modified as wings and having four chambered heart. 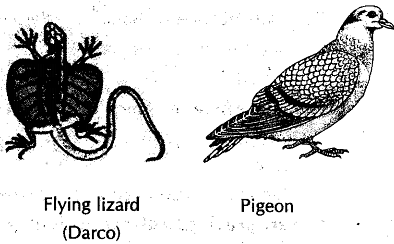 The document Diversity in living organisms Notes - Class 9 is a part of Class 9 category.
All you need of Class 9 at this link: Class 9