The document Division Algorithm for Polynomials Notes | EduRev is a part of the Class 10 Course Mathematics (Maths) Class 10.
All you need of Class 10 at this link: Class 10

The division is the process of splitting a quantity into equal amounts. In terms of mathematics, the process of repeated subtraction or the reverse operation of multiplication is termed as division. For example, when 20 is divided by 4 we get 5 as the result since 4 is subtracted 5 times from 20. The four basic operations viz. addition, subtraction, multiplication and division can also be performed on algebraic expressions. Let us understand the process and different methods of dividing polynomials and algebraic expressions.

Let us discuss all these cases one by one:

Division of a monomial by another monomial

Division of a polynomial by monomial

Division of a Polynomial by Binomial

As we know, binomial is an expression with two terms. Dividing a polynomial by binomial can be done easily. Here, first we need to write the given polynomial in standard form. Now, using the long division method, we can divide the polynomial as given below.Example: Divide 3x3 – 8x + 5 by x – 1.Solution: The Dividend is 3x3 – 8x + 5 and the divisor is x – 1. After this, the leading term of the dividend is divided by the leading term of the divisor i.e. 3x3 ÷ x =3x2. This result is multiplied by the divisor i.e. 3x2(x -1) = 3x3 -3x2 and it is subtracted from the divisor. Now again, this result is treated as a dividend and the same steps are repeated until the remainder becomes zero or its degree becomes less than that of the divisor as shown below. 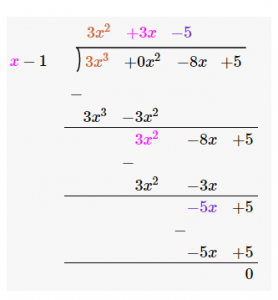 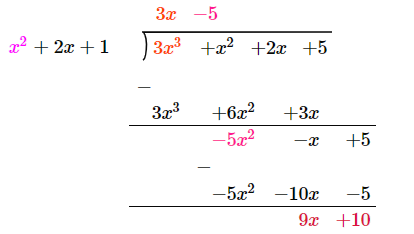