The document Doc: Change of State of Matter Class 9 Notes | EduRev is a part of the Class 9 Course Science Class 9.
All you need of Class 9 at this link: Class 9

1. Changing a solid to a liquid is called melting.

2. Changing a liquid to solid is called solidification.

3. Changing a liquid to gas is called vaporization.

4. Changing a gas to liquid is called condensation.

5. Changing a solid to gas directly is called sublimation.

Can Matter Change its State?

Temperature and pressure are the two factors which decide whether a given substance would be in a solid, liquid or gaseous state. 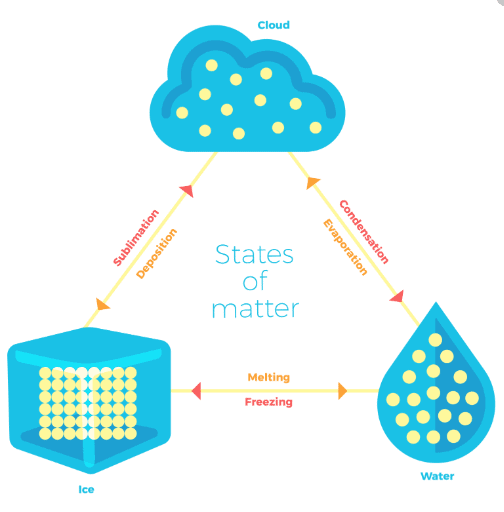 1. Effect of Change of Temperature

The effect of temperature on three states of matter could be seen by performing the following activity.

Try yourself:Which one of the following set of phenomena would increase on raising the temperature?
Explanation

Evaporation, diffusion and expansion of gases increase on raising the temperature. Evaporation rate increases because on increasing temperature, kinetic energy of molecules increases, so the molecules present at the surface of the liquid leave the surface quickly and go into the vapour state. Diffusion and expansion of gases also increase as the molecules move more rapidly and try to occupy more space.

2. Effect of Change of Pressure

Thus, we can conclude that temperature and pressure determine the state of a substance solid, liquid or gaseous. Formation of Water droplets on the surface of a cold bottle due to the condensation of water vapour present in the air. Try yourself:In which phenomena water changes into water vapour below its B.P.?
Explanation

In the case of liquids, a small fraction of particles at the surface, having higher kinetic energy, is able to break away from the forces of attraction of other particles and gets converted into vapour. This phenomenon of change of a liquid into vapours at any temperature below its boiling point is called evaporation.

Differences between Evaporation and Boiling There are five factors which affect the rate of evaporation:

How does Evaporation cause Cooling?

Some other examples of Evaporation The fifth state of matter called Bose-Einstein condensate was finally achieved by three scientists Cornell, Ketterle and Wieman of USA by cooling a gas of extremely low density (about one hundred-thousandth the density of normal air) to super-low temperatures.