Domain Name Services (DNS)We have been using address to identify hosts. While perfectly suited for processing by routers, addresses are not exactly user friendly. It is for this reason that a unique name is also typically assigned to each host in a network. 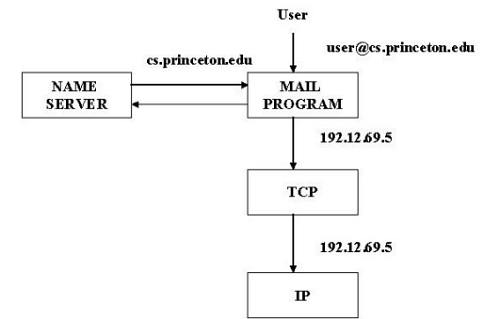 A naming service can be developed to map user-friendly names into router-friendly addresses. Name services are sometimes called middleware because they fill a gap between applications and the underlying network.Host names differ from host addresses in two important ways. First, they are usually of variable length and mnemonic, thereby making them easier for humans to remember. (In contrast, fixed-length numeric addresses are easier for routers to process).Second, names typically contain no information that helps the network locate (route packets toward) the host. Addresses, in contrast, sometimes have routing information embedded in them; flat addresses (those not divisible into component parts) are the exception.A namespace defines the set of possible names. A namespace can be either flat (names are not divisible into components), or it can be hierarchical.The naming system maintains a collection of bindings of names to values. The value can be anything we want the naming system to return when presented with a name; in many cases it is an address.A resolution mechanism is a procedure that, when invoked with a name, returns the corresponding value. A name server is a specific implementation of a resolution mechanism that is available on a network and that can be queried by sending it a message.DNS employs a hierarchical namespace rather than a flat namespace, and the“table” of bindings that implements this namespace is partitioned into disjoint pieces and distributed throughout the Internet. These sub tables are made available in name servers that can be queried over the network.What happens in the Internet is that a user presents a host name to an application program, and this program encages the naming system to translate this name into a host address. The application then opens a connection to this host by presenting some transport protocol with the host‟s IP address.Domain Hierarchy:DNS names are processed from right to left and use periods as the separator. An example domain name for a host is cicada.cs.princeton.edu.There are domains for each country, plus the “big six” domains: .edu, .com,.gov, .mil, .org, and .net.Name Servers:The first step is to partition the hierarchy into sub trees called zones. Each zone can be thought of as corresponding to some administrative authority that is responsible for that portion of the hierarchy.Within this zone, some departments is a zone want the responsibility of managing the hierarchy (and so they remain in the university-level zone), while others, like the Department of Computer science, manage their own department-level zone.The relevance of a zone is that it corresponds to the fundamental unit of implementation in DNS-the name server. Specifically, the information contained in each zone is implemented in two or more name servers.Each name server, in turn, is a program that can be accessed over the Internet. Clients send queries to name servers, and name servers respond with the requested information. Sometimes the response contains the final answer that the client wants, and sometimes the response contains a pointer to another that the client should query next.Each name server implements the zone information as a collection of resource records. In essence, a resource record is a name-to-value binding, or more specifically, a 5-tuple that contains the following fields:

The Name and Value fields are exactly what you would expect, while the Type field specifies how the Value should be interpreted. For example, Type=A indicates that the Value is in IP address. Thus, A records implement the name-to-address mapping we have been assuming. Other record types include

The Class field was included to allow entities other than the NIC to define useful record types. To date, the only widely used Class is the one used by the Internet; it is denoted IN. Finally, the TTL field shows how long this resource record is valid. It is used by servers that cache resource records from other servers; when the TTL expires, the server must evict the record from its cache. 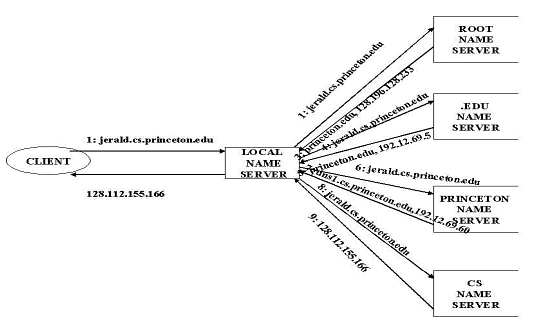