Before starting on double integrals let’s do a quick review of the definition of definite integrals for functions of single variables. First, when working with the integral, 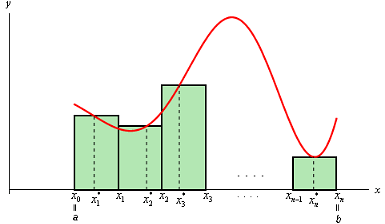 To get the exact area we then took the limit as n goes to infinity and this was also the definition of the definite integral.

In this section we want to integrate a function of two variables,f(x,y).With functions of one variable we integrated over an interval (i.e. a one-dimensional space) and so it makes some sense then that when integrating a function of two variables we will integrate over a region of R2 (two-dimensional space).We will start out by assuming that the region in R2 is a rectangle which we will denote as follows,

This means that the ranges for x and y y are a≤x≤b and c≤y≤d. Also, we will initially assume that f(x,y)≥0 although this doesn’t really have to be the case. Let’s start out with the graph of the surface S S given by graphing f(x,y) over the rectangle R. 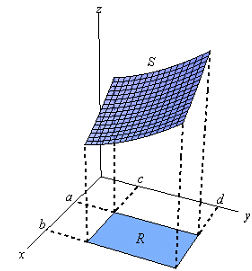 Now, just like with functions of one variable let’s not worry about integrals quite yet. Let’s first ask what the volume of the region under S (and above the xy-plane of course) is. We will approximate the volume much as we approximated the area above. We will first divide up a ≤ x ≤ b into n subintervals and divide up c ≤ y ≤ d into m subintervals. This will divide up R into a series of smaller rectangles and from each of these we will choose a point ( x ∗ i , y ∗ j ) . Here is a sketch of this set up. 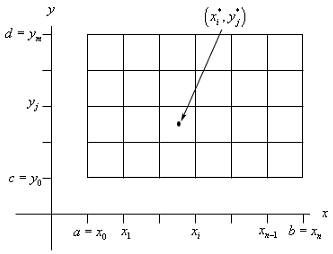 Now, over each of these smaller rectangles we will construct a box whose height is given by f ( x ∗ i , y ∗ j ) f(xi∗,yj) Here is a sketch of that. 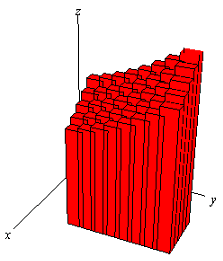 Here is the official definition of a double integral of a function of two variables over a rectangularregion R as well as the notation that we’ll use for it.

Note the similarities and differences in the notation to single integrals. We have two integrals to denote the fact that we are dealing with a two dimensional region and we have a differential here as well. Note that the differential is dA instead of the dx and dy that we’re used to seeing. Note as well that we don’t have limits on the integrals in this notation. Instead we have the R written below the two integrals to denote the region that we are integrating over. As indicated above one interpretation of the double integral of f ( x , y ) over the rectangle R is the volume under the function f ( x , y ) (and above the xy-plane). Or,

We can use this double sum in the definition to estimate the value of a double integral if we need to. We can do this by choosing ( x ∗ i , y ∗ j ) to be the midpoint of each rectangle. When we do this we usually denote the point as

. This leads to the Midpoint Rule,

In the next section we start looking at how to actually compute double integrals.