→ The ratio gives a measure of the curvature ductility of the cross section.

o Ductility characterizes the deformation capacity of members (structures) after yielding, or their ability to dissipate energy.
o In general, ductility is a structural property which is governed by fracture and depends on structure size.
o The defined ductility (ratio) shown above does not give information about effects of a moderate number of cycles nor about the shape of the descending branch in moment-rotation curves.
o For doubly reinforced cross section,

and the curvature ductility ratio factor is given 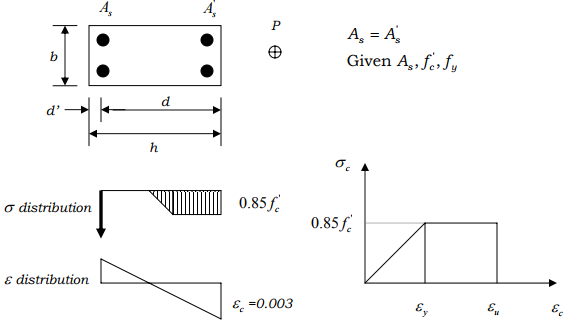 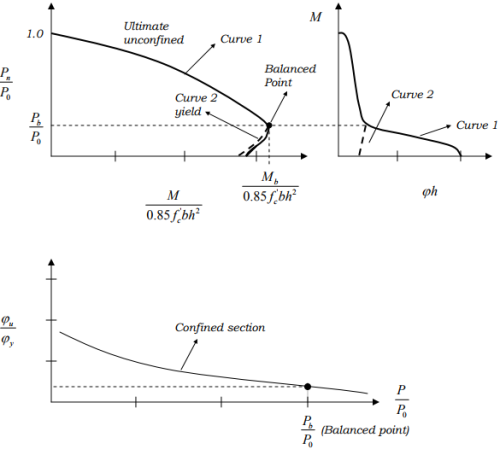 → The difference between Curve 1 and 2 indicates the amount of inelastic bending deformation (energy absorption), which occurs once the yielding starts.
(P0 = pure axial strength.)
→ Ductility is reduced by the presence of axial load.

Because of the brittle behavior of unconfined columns it is recommended that the ends of the columns in frames in earthquake regions be confined by closely spaced transverse reinforcement when, generally, . P > 0.4P0

o Effect of confinement
→ If the compression zone is confined by ties, hoops, and spirals, ductility will be improved.
→ Additional confinement due to loading and support conditions.

o For column members, factors affecting the ductility, other than those related to confinement, are:
→ rate of loading
→ concrete strength
→ bar diameter
→ content of longitudinal steel
→ yield strength of the transverse steel

» Deflections
o Types of deflection
1. Immediate deflections (short-term)
– Deflections that occur at once upon application of load.
– Time-independent
– Elastic-plastic

2. Long-term deflections
– Deflections that occur due to time-dependent behavior of materials, mainly creep and shrinkage.
– Creep (under sustained loading)
– Shrinkage (independent of loading)

The deflection angle between A and B is

where ϕ = curvature
Due the existence of cracks, the effective moment of inertia will be calculated as

where fcr = maximum stress at cracking,
y = maximum distance from N.A. to the outer-most fibre on the cross section.

» Long-term deflection
o The member when loaded undergoes an immediate deflection. The additional deflections are caused due to creep and shrinkage. The rate of these additional deflections decreases by time.
o Effect of creep on the flexure behavior of concrete member
→ Concrete creep results in a shortening of the compressed part of the concrete cross section, hence causes additional curvature and stress redistribution in the section.
→ Effective modulus of elasticity considering creep:
For stress less than

where Ec= modulus of elasticity at the instant of loading.

The effective modulus including creep is

Concrete will tend to shrink, but cannot due to the steel restraint, hence concrete undergoes tensile stress and steel reinforcement will be in compression.
Effective concrete stress considering creep and shrinkage: 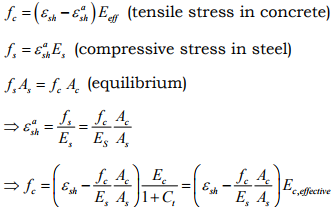 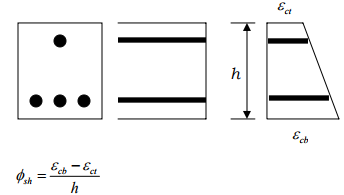 » Simplified approach in computing long-term deflections:
→ Due to complexities, for traditional applications simplified methods are used.
→ Computer based analysis can be performed with effective E modulus to predict long-term deflection, taking into account the load history.

→ In any case, maximum allowable deflections are constrained by structural and functional limitations.
o Some permissible deflections by ACI Code
Minimum thickness of beams: 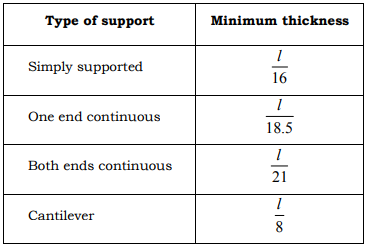 where ξ = a time-dependent coefficient characterizing material properties, and