If a number of bodies are connected & the motion of one body causes the predictable motion to the others, it is known as a mechanism.

Any connection of two links is always a joint or a pair but this pair will only be a kinematic pair when the relative motion between the links is a constrained motion.

If all the links are connected in such a way that the first link is connected to the last link in order to get the closed chain and the relative motions in this closed chain are constrained, then such a closed chain is kinematic chain.

The number of restraints can never be zero (joint is disconnected) or six (joint becomes solid). Maximum number of motions possible of an object in 3D

Number of restraints for different pair

Note: Degrees of Freedom is the number of inputs required to obtain constrained output.

It is a special case of mechanismThose mechanisms, where degree of freedom is one and consisting of only lower pairs, DOF = 1 and h = 0As per the kutzabck’s equation. 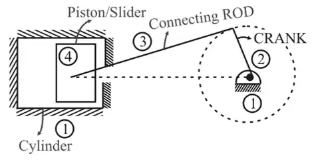 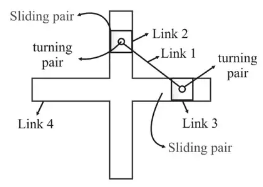 Toggle position in a mechanism is defined as that position when the angle between the input link and coupler link is 180.In such a situation, the velocity of the output link becomes zero and hence, the mechanical advantage becomes infinite.