where x stands for the n tuple of variables xa. Autonomous system is then

In this notation we suppress time-dependence of xa on time because this dependence is assumed implicitly. Motivated by Hamilton's formalism, we intend to interpret the solution xa = xa(t) as the motion in the phase space. Phase space is an abstract space

with coordinates xa. Arbitrary point x ∈ M represents the state of physical system described by equations (8.1). Solution of dynamical system is not unique unless we specify the initial conditions, i.e. values of coordinates xa at some given initial time t0,

Usually we set t0 = 0. The n−tuple of initial coordinates xa0 will be denoted simply by x0 ∈ M.

Suppose we choose a point x0∈ M at time t0 = 0 as in figure 8.1. A mathematical theorem guarantees that there exists unique solution x = x(t) satisfying (8.1) such that x(0) = x0. The solution x = x(t) is also called the phase trajectory. Equations (8.1) essentially state that vector f(x(t)) evaluated at arbitrary point of the trajectory is in fact tangent to the trajectory, see figure 8.1. Hence, we can interpret vector field f(x) as a velocity. Although it can be very difficult or even impossible to solve the equations of motion (8.1), the velocity gives us a good idea about the behaviour of the system. 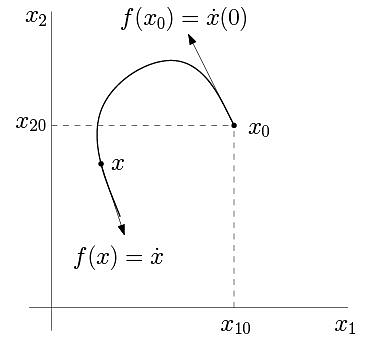 . Initial position is at x0 = x(0). The "velocity" vector at x0 is f (x0 ) and determines the tra jectory of the system in the in nitesimal neighbourhood of the initial point.

Let us see an illustrating example. We are already familiar with the equation of harmonic oscillator

Hence, instead of single equation

of second order we now have two equations of first order

This vector eld can be visualised in Mathematica by function VectorPlot: 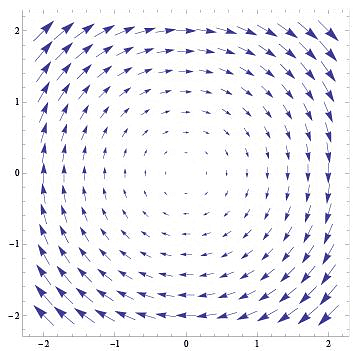 This picture agrees with our previous analysis when we used the conservation of energy to show that the phase tra jectories of harmonic oscillator are circles (or ellipses when using SI units). Another possibility is to use function StreamPlot with the same arguments which yields 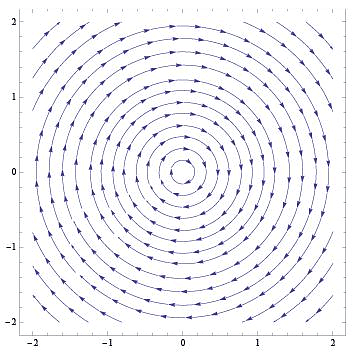 In this section we show how to implement a dynamical system in Mathematica in a convenient way.

This code deserves a brief explanation. Arguments of the function DynDys are

In this example, pure function f is

which is equivalent to

Clearly, this corresponds to harmonic oscillator (8.4).

Initial conditions IC are set to

and we want to nd the solution in time interval (0; 10).Now suppose that we called function DynSys with the arguments above and let us explain how this function works. Thus, we assume that the arguments are

is generated simply by calling

Now we form the right hand side of equations. Recall that vars is the list of variables. We want to evaluate functions fa at point xa, i.e. we need the expression

However, we cannot write simply f[vars] because this would mean

while what we need is

Hence, we must turn the list vars into the sequence of arguments by replacing its head. Command

leads to correct application of function f to arguments xa:

Having de ned the left hand side and the right hand side of dynamical system separately, we join them in a usual way,

Next we de ne the initial conditions with values speci ed in argument IC={1,1}. We need to produce the list

The left hand side of initial conditions consists of the elements of vars evaluated at time 0,

the right hand side consists of the elements of IC. We con join them together by

Finally we solve the list of equations of motion and initial conditions by NDSolve:

Now, the reader should be familiar with functionality of function DynSys. We use this function in the following examples.

To nalize this section we show how to use function DynSys to solve the motion of harmonic oscillator. 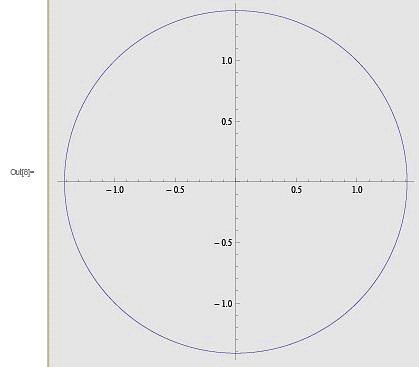 This equations is non-linear because of the presence of the sine. We have seen that this equation cannot be solved in terms of elementary functions but we were able to nd the numerical solution. Moreover, using the Hamiltonian formalism we were able to plot the phase tra jectories without actually solving the equation of motion.

where b is the constant characterizing the strength of resisting force. For example, it can be related to the viscosity of the medium in which the pendulum moves.Pendulum with resisting force is called damped pendulum.

where we assume that driving force is harmonic with angular frequency Ω and amplitude F0. In the subsequent analysis we will show that this kind of pendulum exhibits chaotic behaviour and hence we also call it chaotic pendulum.

We start with rewriting equation (8.5) in the form of dynamical system. This is straightforward since we can de ne

Dynamical system (8.6) can be solved in Mathematica using function DynSys de ned in the previous section. We choose initial conditions

and investigate how values b, Ω and F0 affect the behaviour of the pendulum. First we set

So, we reduce driven pendulum to the case of ordinary mathematical pendulum without friction and driving force (damping coeffcient b = 0 and the amplitude of the force is F0 = 0).

Here we have chosen tmax = 10 but the reader should adjust this parameter in order to reproduce all gures below. Now we can plot the phase tra jectory in a usual way. 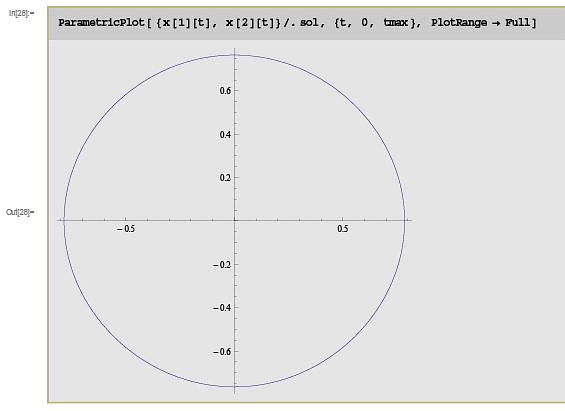 Let us add the friction now and setb = 0.1,see gure 8.2 for the result. We can see that the phase tra jectory is a spiral which, in the limit

ends at the origin of the phase plane. This means that the oscillations are damped until the pendulum stops. Slightly more "fancy" picture can be obtained by 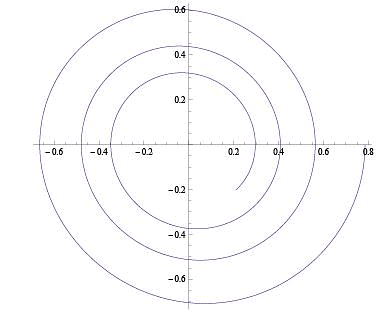 Fig. 8.3. Phase tra jectory of damped pendulum together with the time dependence of deection θ = θ(t).

Let us see how the driving force affects the motion. For this purpose we set

In other words, the pendulum is initially at its equilibrium position and, hence, without driving force it would stay at rest. However, the presence of driving force leads to solution plotted in gure 8.4. 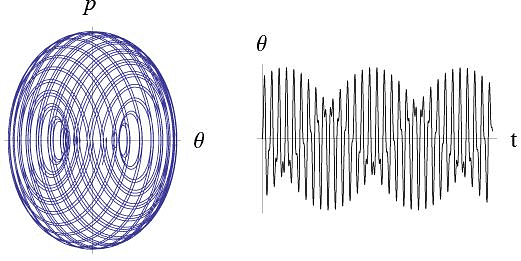 In the following example we choose

see gure 8.5. An interesting feature of this solution is the presence of short transient stage during which the phase tra jectory follows outgoing spiral but then settles at circular periodic orbit. Such behaviour is called limit cycle.

To experiment with values of parameters b, F0 and Ω and with initial values θ(0), p(0) and φ(0). We can see that resulting motion of the pendulum is a consequence of complicated and delicate interplay between three motions: 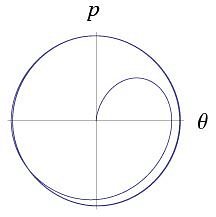 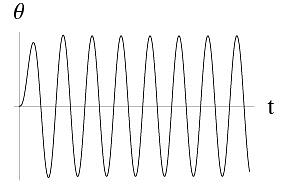