Critical points of the pendulum

Let us return to equation of pure mathematical pendulum

or, in the form of dynamical system,

What are possible equilibrium positions of the pendulum? Clearly, if we set

the pendulum will not move. These conditions correspond to the situation when the pendulum is hanging freely at the equilibrium position with zero initial velocity. In this case the derivatives of θ and p take values

In other words, the derivatives of all variables xa, where x = (θ,  p), vanish and therefore the pendulum does not move.
However, there is another possibility. If we set

then the derivatives will vanish as well:

This corresponds to situation when the pendulum is in upper position. If we were able to arrange initial conditions in such a way that the angle of de
ection θ is exactly equal to π and the velocity is zero, we would obtain an equilibrium conguration in which the pendulum does not move.

is a point for which

If we choose the initial point to x(0) = xC , the system will remain at this initial position forever, it will not move. For mathematical pendulum we have two critical points, 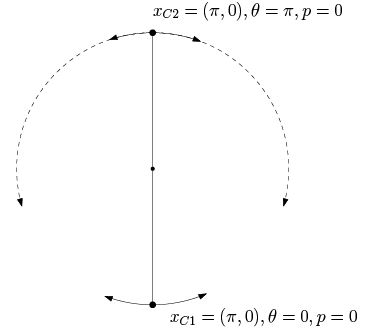 Now suppose that the angle θ is only a small perturbation of θC , i.e

Next we simplify equations of motion (8.7) under this assumption. Let us expand sin θ around critical point θC = 0:

where we have neglected higher powers of δ which is assumed to be small. With this assumption, equations of pendulum (8.7) simplify to

These are, in fact, well-known equations for harmonic oscillator and we can easily plot the solution which we already know is a circle. We can plot it by

where we have chosen small initial deflection θ(0) = 0.1, in accordance with the assumption. Since the solution is a circle, we observe that phase tra jectories near the rst critical point remain in the vicinity of this critical point; an indicator of stability.

Let us now investigate the second critical point located at

As in the previous case, we assume that deviations from critical value θC are small and write

Now we expand sin θ into the Taylor series about θ = θC as follows:

Equations of motion (8.7) simplify to

In order to compare solutions near both critical points we use the following code:

Both trajectories near critical points are plotted in gure 8.7. We can see that trajectory corresponding to rst critical point θC = 0 is a circle and thus remains in the vicinity of the critical point. The second tra jectory corresponding to critical point θC = π, on the other hand, is a line which escapes to in nity. Hence, we can see that the second critical point is unstable in the following sense. If we move the pendulum to θ = π and set the initial velocity to zero, the pendulum remains at this equilibrium position. However, arbitrarily small perturbation (in our case δ = 0:1) will cause the pendulum to escape from equilibrium position quickly. In our case, the tra jectory escapes to in nity, but this is an artefact of the linearization: we have assumed that the perturbation δ is small but as soon as the pendulum is far enough from the critical point, this assumption is not valid anymore.

Then the equations of motion (8.9) reduce to

Since xC and yC are constants, for the time derivatives of x and y we have

Function fx(x, y) can be then expanded into the Taylor series:

where we have used de nition (8.10) in the last step and denoted partial derivatives of fx by

Vertical line with the subscript indicates that partial derivatives must be evaluated at the critical point. Similarly, for fy we find

Thus, near the critical point, planar dynamical system (8.9) can be replaced by simpler equations

Then two equations (8.15) are equivalent to single matrix equation

First we nd the critical points, i.e. we set

There are two solution to these equations,

We analyse these points separately. The emphasis is on nding the critical points and deriving linearized equations of motion. The solution is merely stated because we will analyse all cases in detail later.

where we have neglected higher order terms "∈δ because of linearization. Hence, in the neighbourhood of the rst critical point, the equations of motion are

These equations can be solved trivially to nd

where C1 and C2 are integration constants. We will discus this later, but for now it is obvious that the phase tra jectory escapes to in nity because

Hence, this critical point is unstable.

where we have neglected products "∈δ again. Now the linearized equations of motion are

The reader is invited to check that solutions (δ, ∈) are hyperbolas escaping to in nity and hence the second critical point is unstable again. 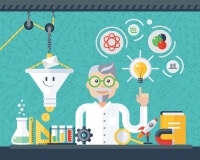