In the previous idea we de ned the critical points and sketched how these points can be divided to stable and unstable points. We have seen that mathematical pendulum has two critical points, one is stable, the other is not. In the next example we have seen a system with two unstable critical points. The classi cation of critical points, however, is more subtle and we discuss all possibilities in this section.Let us first recapitulate our goal. We study planar dynamical system described by equations

We assume that we have found critical point of this system, i.e. point (xC, yC ) such that

and study the behaviour of the system near this critical point. We linearize the equations in the neighbourhood of critical point so that we obtain equations2

This system can be written also in the matrix form

Now we discuss several forms of matrix J and classify the critical points. Finally we will show how the analysis can be done for general matrix J .

which corresponds to matrix

System (8.17) can be easily solved. Equations for x and y are independent; we say that these equations are decoupled which means that equation for x_ does not contain y and vice versa.

which is separable dierential equation. We can rewrite it as

where C is an integration constant. It is customary that if the logarithm appears in the solution, we write the constant as a logarithm as well3:

Exponentiating the last equation we arrive at

By the same procedure we solve equation for y to get

where L is an integration constant again. Notice that, according to the solution, we have

Clearly, the only critical point of system (8.17) is (0; 0). Having derived solution of this system, we can analyze its behaviour near the critical point. Useful function to visualise properties of the system near critical point is StreamPlot which takes the vector eld and plots tra jectories. In the following example we choose λ1 = λ2 = 1. 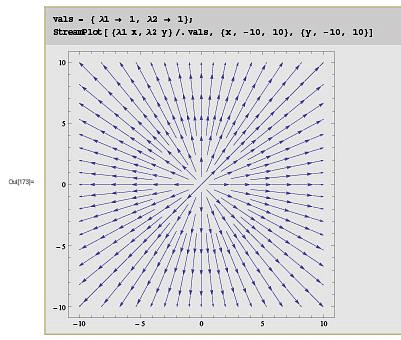 In this figure we can see tra jectories (8.19) for initial points (x0, y0) chosen by Mathematica. Notice that we have inserted the right hand side of (8.17) as an argument of function StreamPlot. We can see that the trajectories are straight lines emanating from the origin (critical point) and tending to in nity exponentially.

What about other choices of λ1,2? It is clear that function eλt is increasing for λ > 0 and decreasing for λ < 0. We can conclude that qualitative behaviour of the system depends on signs of λ1,2 and four possibilities are shown in gure 8.8 which was created by following commands in Mathematica. We distinguish three cases. 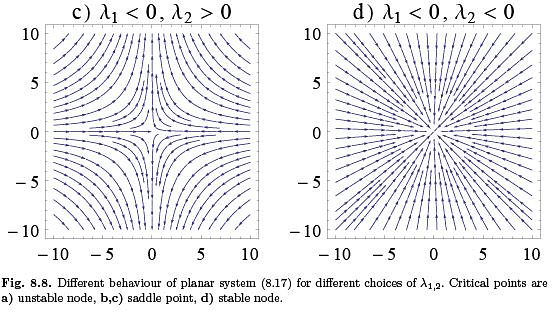 where e is called an eigenvector. It is easy to show that the eigenvalues of matrix (8.18) are λ1 and λ2 and corresponding eigenvectors are

In other words, vectors e1 and e2 satisfy equations

We can see that tra jectories starting on lines determined by vectors ei, i = 1, 2, always remain in these lines. If the tra jectory is being repelled from the critical point along direction e, the line determined by vector e is called unstable manifold. If the tra jectory is attracted to the critical point along the vector e, the line determined by e is called stable manifold. For matrix (8.18), vectors e1 and e2 are always eigenvectors.We can see that e1 lies on the x axis and e2 lies on the y axis. Hence, the axes are stable or unstable manifolds of system (8.17), depending on the sign of λ1,2.

The classi cation introduced above can be reformulated in the following way. Let

be a matrix of general linear dynamical system

If matrix J has two real eigenvalues λ1 and λ2, then critical point is stable/unstable node or a saddle point, depending on the signs of these eigenvalues.

We illustrate this classi cation on the example. Consider dynamical system

This matrix is not of the form (8.18) but we can apply the second criterion. Eigenvalues and eigenvectors can be found in Mathematica using

which shows that eigenvalues are

and corresponding eigenvectors are

Since λ1 > 0 and λ2 < 0, vector e1 de nes the stable manifold and e2 de nes unstable manifold. Since both eigenvalues have different signs, the critical point is a saddle point and it is regular. Phase tra jectories together with stable and unstable manifolds can be plotted by

The result is plotted in gure 8.9.