Matrix of this system is

System (8.21) is little trickier to solve. Let us switch to polar coordinate system by usual transformation

These relations can be used to find

Now we use (8.21) to derive corresponding equations for r and θ:

We can see that dynamical system (8.21) in polar coordinates decouples to two independent equations for coordinates r and θ,

First we solve equation for r. Let us write it in the form

where the integration constant has been written as a logarithm (see footnote on page 162). Exponentiating the last equation we arrive at

Next we solve equation for θ. This is trivial since we have

where the integration constant has been denoted by θ0 and represents the value of θ at t = 0. Summa summarum, solution of system (8.23) acquires the form

Hence, solution of original system (8.21) in the Cartesian coordinates reads

Clearly, this represents motion at constant angular velocity β and constant radius r0 and therefore the phase trajectories are circles of radius r0. If α ≠ 0, the radius of the "circle" will be

and can be classi ed as follows:

Parameter β  has the meaning of angular velocity. If it is zero, spirals become straight lines and dynamical system reduces to previous case (8.17). If it is non-zero, its sign determines the sense of rotation: tra jectories orbit the origin in a clockwise sense for β  > 0 and in a counter-clockwise sense for β < 0.

Let us now analyse critical points of system (8.21) in terms of eigenvalues of matrix (8.22)

We can use Mathematica to nd the eigenvalues and eigenvectors of matrix (8.22) by

which shows that this matrix has two eigenvalues

In other words, eigenvalues and eigenvectors of matrix J satisfy relations

The rst observation is that the eigenvectors are complex and hence there are no neither stable nor unstable manifolds, i.e. there is no real direction which is mapped to the same direction. The only exception is when β = 0 since in this case dynamical system (8.21) reduces to (8.17) and the eigenvectors become real.

Second, eigenvalues λ1,2 are mutually complex conjugated (as well as the eigenvectors), where the bar denotes the complex conjugation. Hence, even if the dynamical system is not of the form (8.21), we can conclude, that if the matrix J has two complex conjugated eigenvalues

the critical point is stable/unstable focus or a centre, depending on the values of α and β as classi ed above.

This system is not of the form (8.21) but we can apply the criterion based on the analysis of eigenvalues. In Mathematica we type

where we have used Expand in order to simplify the expression for eigenvectors (try this code without Expand). We have found two eigenvalues

which are mutually complex conjugated. In this case, parameters α and β are

Parameter α is positive and so the critical point is an unstable focus. Tra jectories of dynamical system considered: 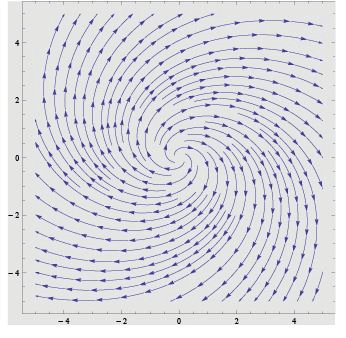 Another example is the system

Eigenvalues are found by

Hence, now the eigenvalues are

Since α = 0, critical point is a centre rather than focus. Tra jectories of this dynamical system are the following: However, we have seen that the analysis can be performed using the eigenvalues of these matrices. Now we consider general linear planar dynamical system

Let us find the eigenvalues and eigenvectors of this general matrix. Recall that the determinant of matrix J is

The trace of the matrix is de ned as a sum of its diagonal elements, i.e.

Eigenvalues λ are defined by equation

where e is an eigenvector. The last equation can be rewritten in the form

where I is the unit matrix 2 x 2 so that

This equation is a homogeneous system of linear equations which has non-trivial solutions only if the determinant of the system is zero:

Expanding the brackets we arrive at

This is a quadratic equation for λ and its solutions are

Now we can summarize the classification of critical points as follows.

Moreover, if the real parts of eigenvalues λ1,2 are non-zero, critical point is called hyperbolic, otherwise it is called non-hyperbolic.