There is only one critical point at the origin,

Since the system is linear, we do not have to linearize it and can write the matrix of linearized system immediately:

Its eigenvalues are calculated from (8.27):

Eigenvectors can be found easily by hand. Recall that eigenvectors are solutions to equation

(Notice that we suppress the Einstein summation convention). For i = 1 we obtain homogeneous system of linear equations

where e1 = (a, b) is unknown eigenvector. Since the rows (or columns) of the matrix above are linearly dependent, this system has infinitely many non-trivial solutions satisfying condition a = -b. Hence, all eigenvectors corresponding to eigenvalue λ1 = 1 have the form

We choose the eigenvector to be

To summarize, we have found the eigensystem of matrix J : Linear dynamical system has the form

The matrix of this system is clearly

Roughly speaking, constant α can be interpreted as a probability of the birth of a new rabbit when there are no foxes. This equation has solution

which means that isolated population of rabbits will grow exponentially. 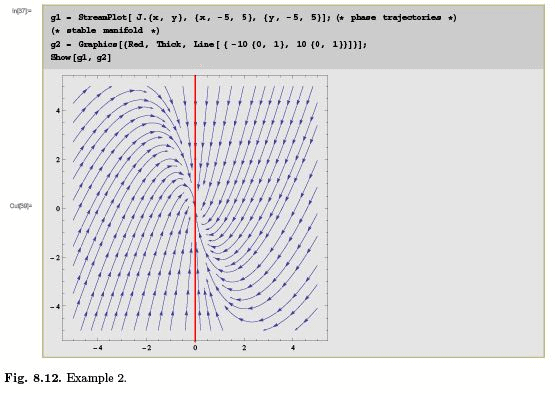 These are Volterra-Lotka equations. Obviously, they are non-linear and the nonlinearity represents the interaction between two populations. All constants are assumed to be positive.

Critical points can be found by

Hence, the critical points are

In order to linearize equations (8.29) we introduce the Jacobi matrix J

The Jacobi matrix can be found in Mathematica by

Next we evaluate the Jacobian at both critical points:

Finally we nd eigenvalues and eigenvectors by

Flow of the vector field

where xa0 are constants with the meaning of initial value of coordinates xa. The solution of dynamical system is then a set of functions xa as functions of time,

Hence, in the following, by symbol x(t; x0) we mean the set of functions

The flow of dynamical system (8.30) is a mapping

so that we have

Vector field fa can be plotted by 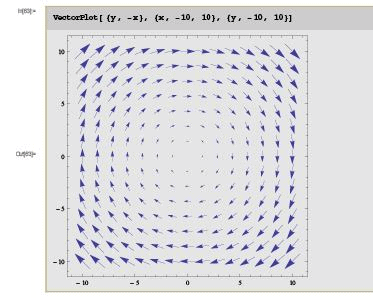 This dynamical system for initial conditions

which shows, in the notation introduced above, Recall that we have de ned the critical point or fixed point xC of dynamical system (8.30) as such point xC for which

System with initial conditions x0 = xC is in equilibrium in the sense that it remains in the critical point at all times, i.e.

be standard norm de ned on the phase space M , i.e. for any x ∈ M its norm is

In general, the norm is a measure of distance of point x from the origin. In some situations, it is useful to introduce different notion of the norm, for example the so-called p norm (p is positive integer) de ned by

In the following we will use standard norm

which is a standard Euclidean distance, as follows from the Pythagorean theorem. In general, the norm must satisfy three relations.

In some contexts the first condition is relaxed, i.e. we admit there are vectors