The document Dynamics of rotational motion about a fixed axis Notes | EduRev is a part of the Class 11 Course Physics Class 11.
All you need of Class 11 at this link: Class 11

When in motion, a rigid body is believed to be a system of particles. Each of its particles follows a path depending on the kind of motion it follows. In a translational motion, all the particles move and behave in a similar manner.  But in rotational motion, the rigid body dynamics indicate a different behaviour.All the particles behave differently. Since rotation here is about a fixed axis, every particle constituting the rigid body behaves to be rotating around a fixed axis. As the distance from the axis increases the velocity of the particle increases. Components of Interest in Rotational Motion

For understanding the dynamics of a rigid body during rotational motion around a fixed axis we need to study the graph below: 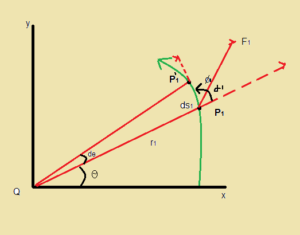 The graph above represents work done by a torque acting on a particle that is rotating about a fixed axis. The particle is moving in a circular path with center Q on the axis. P1P’1 is the arc of displacement ds1. The graph in the figure shows the rotational motion of a rigid body across a fixed axis. As already mentioned that while studying rigid body dynamics of rotational motion we consider only those forces that lie in planes perpendicular to the axis of rotation. F1 is the same force acting on particle P1 and lies in a plane perpendicular to the axis.This plane can be called as x’-y’ plane and r1 is the radius of the circular path followed by particle P1. Now from the figure, we know that QP1 = r1 and particle P1 moves to position P’ in time Δt. The displacement of the particle here is ds1. The magnitude of ds1 = r1dθ. Here, dθ is the angular displacement of the particle and is equal to ∠P1QP’1. The work done by the force on particle = dW1 =  F1ds1cosø1 = F1(r1dθ) sinα1. ø1 is the angle between the tangent at P1 and the force F1 and α1 is the angle between radius vector and F1.

In the figure, we notice that the radius vector is 90° (ø1 + α1). The torque due to force F1 around the origin is a product of radius vector and F1. Here we should remember that any particle on the axis is excluded from our analysis. So the effective torque in that case arising due to force F1 is signified by τ.τ = QP × F1. Effective torque τ is directed along the axis of rotation with a magnitude of r1F1sinα. This brings us to the conclusion that work done = τ1 dθ.

Work done by Multiple ForcesThe above graph represents the force and work done by the same force on one particle. Now let’s consider the case of more than one forces acting on the rigid body. In a system of particles with more than one force acting on the system, the work done by each of them is added, this gives the total work done by the body. The magnitude of torques due to various forces is denoted as τ1, τ2,τ3…… etc. So, dW = (τ1+ τ2+τ3 +……) dθ. The angular displacement (dθ) for all the particles is same here. All the torques under our consideration are parallel to the fixed axis and the magnitude of the total external force is just the sum of individual torques by various particles. This gives us the equation: dW = τ dθ. This represents the work done by the total torque that acts on the rigid body rotating about a fixed axis.

Relation Between Rotational and Translational Motion

The workdone (dW) by external torque during rotational motion = τ dθ. The workdone (dW) by the external force during translational motion = Fds. Here, ds is the linear displacement and F is the external force. Dividing both by dt we get: P= dW/dt = τ dθ/dt = τω or P= τω. Here, P is the instantaneous power. Instantaneous power (P) for linear motion = Fv.Do you notice any similarity? We know that a perfectly rigid body lacks internal motion hence the work done by external torque increases the kinetic energy of the body. Now, to find the rate of increase in kinetic energy we equate the equations as: d/dt [Iω2]/ 2 = I (2ω)/2 [dω/dt]. From the equation, we assume that moment of inertia is constant and does not change with time.This also means that the mass of the body also does not change. Now since the axis is also fixed, its position with respect to the body also doesn’t change so: using α= dω /dt. d/dt [Iω2]/ 2 = Iωα. Therefore the rate of work done and rate of increase in kinetic energy can be equated as τω= Iωα or τ= Iα. Now, this equation is similar to Newton’s Second law for Linear motion, F = ma.Therefore from the relation of work done and kinetic energy we come to a conclusion that Newton’s second law of linear motion is applicable to rigid bodies undergoing rotational motion. So, Newton’s second law of rotational motion states that the angular acceleration during rotational motion of a rigid body is directly proportional to the applied torque and inversely proportional to the moment of Inertia of that body.