The document Earth's Magnetism and Magnetic Declination Class 12 Notes | EduRev is a part of the Class 12 Course Physics For JEE.
All you need of Class 12 at this link: Class 12

Introduction to The Earth’s Magnetism Fig: SI unit of earth’s magnetic field is given by tesla The components that are responsible for the magnitude as well as the direction of earth’s magnetic field at a particular place is given by: Fig: The angle θ is known as the magnetic declination Angle of Dip or Magnetic Inclination

Take a magnetic needle and suspend it freely so that it can rotate about a horizontal axis as shown in the diagram below: 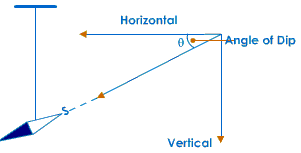 The angle that the north pole of the needle makes with the horizontal axis is known as the Angle of Dip or Magnetic Inclination.