Special relativity resembles trigonometry in that both are reliable because they are based on postulates that flow one from another in a logical way. (credit: Jon Oakley, Flickr) 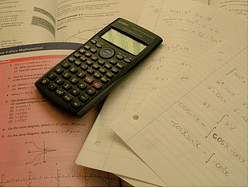 Have you ever used the Pythagorean Theorem and gotten a wrong answer? Probably not, unless you made a mistake in either your algebra or your arithmetic. Each time you perform the same calculation, you know that the answer will be the same. Trigonometry is reliable because of the certainty that one part always flows from another in a logical way. Each part is based on a set of postulates, and you can always connect the parts by applying those postulates. Physics is the same way with the exception that all parts must describe nature. If we are careful to choose the correct postulates, then our theory will follow and will be verified by experiment.Einstein essentially did the theoretical aspect of this method for relativity. With two deceptively simple postulates and a careful consideration of how measurements are made, he produced the theory of special relativity.

Inertial Reference FrameAn inertial frame of reference is a reference frame in which a body at rest remains at rest and a body in motion moves at a constant speed in a straight line unless acted on by an outside force.The laws of physics seem to be simplest in inertial frames. For example, when you are in a plane flying at a constant altitude and speed, physics seems to work exactly the same as if you were standing on the surface of the Earth. However, in a plane that is taking off, matters are somewhat more complicated. In these cases, the net force on an object, F, is not equal to the product of mass and acceleration, ma. Instead, F is equal to ma plus a fictitious force. This situation is not as simple as in an inertial frame. Not only are laws of physics simplest in inertial frames, but they should be the same in all inertial frames, since there is no preferred frame and no absolute motion. Einstein incorporated these ideas into his first postulate of special relativity.

The laws of physics are the same and can be stated in their simplest form in all inertial frames of reference.

As with many fundamental statements, there is more to this postulate than meets the eye. The laws of physics include only those that satisfy this postulate. We shall find that the definitions of relativistic momentum and energy must be altered to fit. Another outcome of this postulate is the famous equation E=mc2.

The second postulate upon which Einstein based his theory of special relativity deals with the speed of light. Late in the 19th century, the major tenets of classical physics were well established. Two of the most important were the laws of electricity and magnetism and Newton’s laws. In particular, the laws of electricity and magnetism predict that light travels at c = 3.00108 m/s in a vacuum, but they do not specify the frame of reference in which light has this speed.There was a contradiction between this prediction and Newton’s laws, in which velocities add like simple vectors. If the latter were true, then two observers moving at different speeds would see light traveling at different speeds. Imagine what a light wave would look like to a person traveling along with it at a speed c. If such a motion were possible then the wave would be stationary relative to the observer. It would have electric and magnetic fields that varied in strength at various distances from the observer but were constant in time. This is not allowed by Maxwell’s equations. So either Maxwell’s equations are wrong, or an object with mass cannot travel at speed c. Einstein concluded that the latter is true. An object with mass cannot travel at speed c. This conclusion implies that light in a vacuum must always travel at speed c relative to any observer. Maxwell’s equations are correct, and Newton’s addition of velocities is not correct for light.Investigations such as Young’s double slit experiment in the early-1800s had convincingly demonstrated that light is a wave. Many types of waves were known, and all travelled in some medium. Scientists therefore assumed that a medium carried light, even in a vacuum, and light travelled at a speed c relative to that medium. Starting in the mid-1880s, the American physicist A. A. Michelson, later aided by E. W. Morley, made a series of direct measurements of the speed of light. The results of their measurements were startling.

The Michelson-Morley experiment demonstrated that the speed of light in a vacuum is independent of the motion of the Earth about the Sun.

The eventual conclusion derived from this result is that light, unlike mechanical waves such as sound, does not need a medium to carry it. Furthermore, the Michelson-Morley results implied that the speed of light c is independent of the motion of the source relative to the observer. That is, everyone observes light to move at speed c regardless of how they move relative to the source or one another. For a number of years, many scientists tried unsuccessfully to explain these results and still retain the general applicability of Newton’s laws.It was not until 1905, when Einstein published his first paper on special relativity, that the currently accepted conclusion was reached. Based mostly on his analysis that the laws of electricity and magnetism would not allow another speed for light, and only slightly aware of the Michelson-Morley experiment, Einstein detailed his second postulate of special relativity.

The speed of light c is a constant, independent of the relative motion of the source.

Deceptively simple and counterintuitive, this and the first postulate leave all else open for change. Some fundamental concepts do change. Among the changes are the loss of agreement on the elapsed time for an event, the variation of distance with speed, and the realization that matter and energy can be converted into one another. You will read about these concepts in the following sections.

Misconception Alert: Constancy of the Speed of Light

Which of Einstein’s postulates of special relativity includes a concept that does not fit with the ideas of classical physics? Explain.

Is Earth an inertial frame of reference? Is the Sun? Justify your response.

When you are flying in a commercial jet, it may appear to you that the airplane is stationary and the Earth is moving beneath you. Is this point of view valid? Discuss briefly.