The document Electric Potential in a Uniform Electric Field Physics Notes | EduRev is a part of the Physics Course Basic Physics for IIT JAM.
All you need of Physics at this link: Physics

In the previous section, we explored the relationship between voltage and energy. In this section, we will explore the relationship between voltage and electric field. For example, a uniform electric field E is produced by placing a potential difference (or voltage) ΔV across two parallel metal plates, labeled A and B. Examining this will tell us what voltage is needed to produce a certain electric field strength; it will also reveal a more fundamental relationship between electric potential and electric field. From a physicist’s point of view, either ΔV or E can be used to describe any charge distribution. ΔV is most closely tied to energy, whereas E is most closely related to force. ΔV is a scalar quantity and has no direction, while E is a vector quantity, having both magnitude and direction. (Note that the magnitude of the electric field strength, a scalar quantity, is represented by E below.) The relationship between ΔV and E is revealed by calculating the work done by the force in moving a charge from point A to point B. But, as noted in Electric Potential Energy: Potential Difference, this is complex for arbitrary charge distributions, requiring calculus. We therefore look at a uniform electric field as an interesting special case.The relationship between V and E for parallel conducting plates is E = V/d. (Note that ΔV =VAB  in magnitude. For a charge that is moved from plate A at higher potential to plate B at lower potential, a minus sign needs to be included as follows: -ΔV = VA -VB = VAB. See the text for details.) 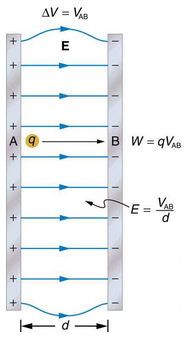 The potential difference between points A and B is

Entering this into the expression for work yields

Work is W= Fd cos θ; here cos θ =1, since the path is parallel to the field, and so W =Fd.SinceF = qE, we see that W = qEd. Substituting this expression for work into the previous equation gives

qEd = qVAB.The charge cancels, and so the voltage between points A and B is seen to be

Voltage between Points A and B

What Is the Highest Voltage Possible between Two Plates?Dry air will support a maximum electric field strength of about 3.0106 V/m. Above that value, the field creates enough ionization in the air to make the air a conductor. This allows a discharge or spark that reduces the field. What, then, is the maximum voltage between two parallel conducting plates separated by 2.5 cm of dry air?

StrategyWe are given the maximum electric field E between the plates and the distance d between them. The equation VAB=Ed can thus be used to calculate the maximum voltage.

The potential difference or voltage between the plates is

VAB = EdEntering the given values for

One of the implications of this result is that it takes about 75 kV to make a spark jump across a 2.5 cm (1 in.) gap, or 150 kV for a 5 cm spark. This limits the voltages that can exist between conductors, perhaps on a power transmission line. A smaller voltage will cause a spark if there are points on the surface, since points create greater fields than smooth surfaces. Humid air breaks down at a lower field strength, meaning that a smaller voltage will make a spark jump through humid air. The largest voltages can be built up, say with static electricity, on dry days.

A spark chamber is used to trace the paths of high-energy particles. Ionization created by the particles as they pass through the gas between the plates allows a spark to jump. The sparks are perpendicular to the plates, following electric field lines between them. The potential difference between adjacent plates is not high enough to cause sparks without the ionization produced by particles from accelerator experiments (or cosmic rays). (credit: Daderot, Wikimedia Commons) 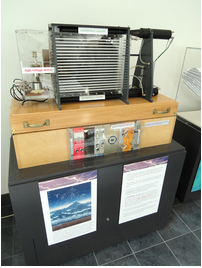 Field and Force inside an Electron Gun(a) An electron gun has parallel plates separated by 4.00 cm and gives electrons 25.0 keV of energy. What is the electric field strength between the plates? (b) What force would this field exert on a piece of plastic with a 0.500 C charge that gets between the plates?

Since the voltage and plate separation are given, the electric field strength can be calculated directly from the expression

Since the electron is a single charge and is given 25.0 keV of energy, the potential difference must be 25.0 kV. Entering this value for VAB and the plate separation of 0.0400 m, we obtain

where Δs is the distance over which the change in potential, ΔV, takes place. The minus sign tells us that E points in the direction of decreasing potential. The electric field is said to be the gradient (as in grade or slope) of the electric potential.

where Δs is the distance over which the change in potential, ΔV, takes place. The minus sign tells us that E points in the direction of decreasing potential. The electric field is said to be the gradient (as in grade or slope) of the electric potential.

For continually changing potentials, ΔV and Δs become infinitesimals and differential calculus must be employed to determine the electric field.

where Δs is the distance over which the change in potential, ΔV, takes place. The minus sign tells us that E points in the direction of decreasing potential.) The electric field is said to be the gradient (as in grade or slope) of the electric potential.

Will a negative charge, initially at rest, move toward higher or lower potential? Explain why.