This theory was put forward by James clark Maxwell in 1864.

The main points of this theory are:

1)The energy is emitted from any source continuously in the form of radiations and is called the radiant energy.

3)The radiations possesses wave character and travel with the velocity of light.

4)These waves do not require any material medium for propagation.

Characteristics of a wave

Wavelength of a wave is defined as the distance between any two consecutive crest or trough.

It is represented by  λ (Lambda) and is expressed in A° or m or cm or nm or pm.

Frequency of a wave is defined as the number of waves passing through a point in 1 seconds.

Velocity of a wave is defined as the linear distance travelled by the wave in 1 seconds.

It is represented by c and is expressed in cm/sec or m/sec.

Amplitude of a wave is the height of the crest or the depth of the trough.

It is represented by a and is expressed in the units of length.

Wavenumber is defined as the number of waves present in 1 cm length.

It will be equal to the reciprocal of the wavelength.It is represented by

Relation between velocity ,wavelength and frequency of a wave

The different types of electromagnetic radiations differ only in their wavelength and hence frequency.

Their Wave length increases in the following order: 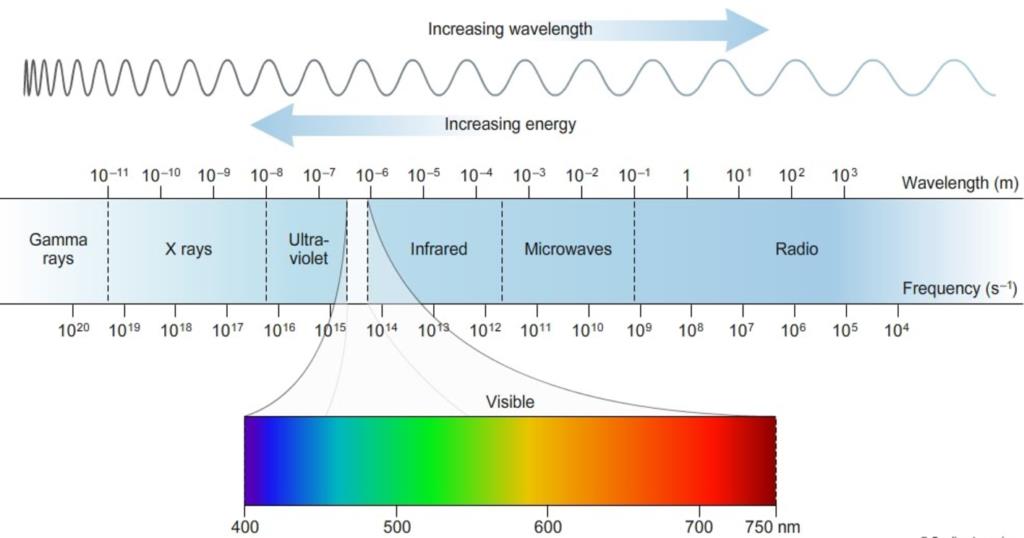 When these electromagnetic radiations are arranged in order of their increasing wavelength or decreasing frequencies, the complete spectrum obtained is called electromagnetic spectrum.

It could not explain the :

1)The phenomena of black body radiation

3)The variation of heat capacity of solid as a function of temperature.

4)The line spectra of atoms with special reference to hydrogen.

If any substance with high melting point is heated, it first becomes red, then yellow and finally begins to glow with white and then blue light.

If the substance being heated is a black body (which is a perfect absorber and perfect radiator of energy ie. which can emit and absorb all frequencies) the radiations emitted is called black body radiation

The energy of any electromagnetic radiation is proportional to its intensity, ie. square of amplitude and is independent of its frequency or wavelength.

The change of colours shows that on heating ,the frequency of the radiations emitted is increasing. 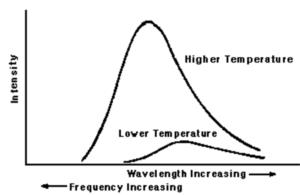 When radiations with certain minimum frequency ( νo) strike the surface of a metal, the electrons are ejected from the surface of the metal. This phenomenon is called Photoelectric effect

The electrons emitted are called photoelectrons.

2)The velocity of the electron ejected depends upon the frequency of the incident radiation and is independent of its intensity.

3)The number of photoelectrons ejected is proportional to the intensity of incident radiation.

Max Planck in 1900, put forward a theory known after his name as Planck’s Quantum theory

The main points of this theory are :

2)The energy of each quantum is directly proportional to the frequency of the radiation ie.

Where h is the proportionality constant, called Planck’s Constant.

3)The total amount of energy emitted or absorbed by a body will be some whole number quanta.

When some solid substance is heated, the atoms of the substance are set into oscillations and emit radiations of frequency, ν. Now ,as heating is continued, more and more energy is being absorbed by the atoms and they emit radiations of higher and higher frequency. As red light has minimum frequency and yellow light has higher frequency, therefore the body on heating becomes first red,  then yellow and so on.

1)When light of some particular frequency falls on the surface of metal, the photon gives its entire energy to the electron of the metal atom. The electron will be detached from the metal atom only if the energy of the photon is sufficient to overcome the force of attraction of the electron by the nucleus.That is why photoelectrons are ejected only when the incident light has a certain minimum frequency (threshold frequency ν0)

2If the frequency of the incident light is more than the threshold frequency ,the excess energy is imparted to the electron as kinetic energy.