The document Electron Spin and Stern-Gerlach Experiment - Angular Momentum, Quantum Mechanics, CSIR-NET Physical Physics Notes | EduRev is a part of the Physics Course Physics for IIT JAM, UGC - NET, CSIR NET.
All you need of Physics at this link: Physics Spin "up" and "down" allows two electrons for each set of spatial quantum numbers.

The resulting fine structure which is observed corresponds to two possibilities for the z-component of the angular momentum.

Two types of experimental evidence which arose in the 1920s suggested an additional property of the electron. One was the closely spaced splitting of the hydrogen spectral lines, called fine structure. The other was the Stern-Gerlach experiment which showed in 1922 that a beam of silver atoms directed through an inhomogeneous magnetic field would be forced into two beams. Both of these experimental situations were consistent with the possession of an intrinsic angular momentum and a magnetic moment by individual electrons. Classically this could occur if the electron were a spinning ball of charge, and this property was called electron spin.

With this evidence, we say that the electron has spin 1/2. An angular momentum and a magnetic moment could indeed arise from a spinning sphere of charge, but this classical picture cannot fit the size or quantized nature of the electron spin. The property called electron spin must be considered to be a quantum concept without detailed classical analogy. The quantum numbers associated with electron spin follow the characteristic pattern:

where g is called the gyromagnetic ratio and the electron spin g-factor has the value g = 2.00232 and g=1 for orbital angular momentum. The precise value of g was predicted by relativistic quantum mechanics in the Dirac equation and was measured in the Lamb shiftexperiment. A natural constant which arises in the treatment of magnetic effects is called the Bohr magneton. The magnetic moment is usually expressed as a multiple of the Bohr magneton.

The term "electron spin" is not to be taken literally in the classical sense as a description of the origin of the magnetic moment described above. To be sure, a spinning sphere of charge can produce a magnetic moment, but the magnitude of the magnetic moment obtained above cannot be reasonably modeled by considering the electron as a spinning sphere. High energy scattering from electrons shows no "size" of the electron down to a resolution of about 10-3 fermis, and at that size a preposterously high spin rate of some 1032 radian/s would be required to match the observed angular momentum. 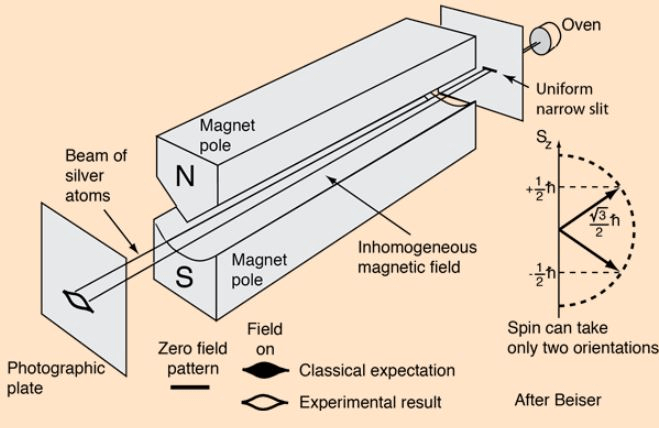 This experiment confirmed the quantization of electron spin into two orientations. This made a major contribution to the development of the quantum theory of the atom.

where g is the electron spin g-factor and mB is the Bohr magneton.

Using the relationship of force to potential energy gives

In 1921, Otto Stern and Walter Gerlach performed an experiment which showed the quantization of electron spin into two orientations. This made a major contribution to the development of the quantum theory of the atom.

The actual experiment was carried out with a beam of silver atoms from a hot oven because they could be readily detected using a photographic emulsion. The silver atoms allowed Stern and Gerlach to study the magnetic properties of a single electron because these atoms have a single outer electron which moves in the Coulomb potential caused by the 47 protons of the nucleus shielded by the 46 inner electrons. Since this electron has zero orbital angular momentum (orbital quantum number l=0), one would expect there to be no interaction with an external magnetic field.

Stern and Gerlach directed the beam of silver atoms into a region of nonuniform magnetic field (see experiment sketch). A magnetic dipole moment will experience a force proportional to the field gradient since the two "poles" will be subject to different fields. Classically one would expect all possible orientations of the dipoles so that a continuous smear would be produced on the photographic plate, but they found that the field separated the beam into two distinct parts, indicating just two possible orientations of the magnetic moment of the electron.