It is a branch of physics that deals with the phenomena and properties of stationary or slow-moving electric charges with no acceleration.

What is an Electric charge?

The property associated with matter due to which it produces and experiences electric and magnetic fields.

Therefore, the charge is dimensionally represented as [T1 I1].

Methods of charging of a body

What is Coulomb’s Law?

It states that the electrostatic force of attraction or repulsion between two charged bodies is directly proportional to the product of their charges and varies inversely as the square of the distance between the two bodies.

.  The relation will again be true, since, in that case, have the same directions.

The total force on a given charge is the vector sum of all the individual forces exerted by each of the other charges.

Relation between coulomb and stat-coulomb

What is the Dielectric constant?

Here, F1 and F2 are the magnitudes of the force between them in free space and in a medium respectively.

What is an Electric field (

What are Electric lines of force?

What is Electric Flux?

for all the elementary areas constituting the surface.

What is Gauss Theorem?

It states that, for any distribution of charges, the total electric flux linked with a closed surface is 1/ε0 times the total charge with in the surface.

What is Electric Field Intensity?

The space around an electric charge in which its influence can be felt is known as the electric field. The electric field intensity at a point is the force experienced by a unit positive charge placed at that point.

The direction of electric field E is radially outward for a line of positive charge. 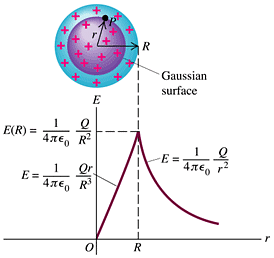 Here, Q is the total charge 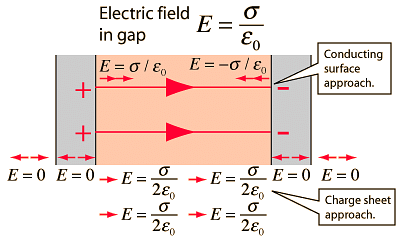 E = σ/2ε0This signifies, the electric field near a charged sheet is independent of the distance of the point from the sheet and depends only upon its charge density and is directed normally to the sheet.

What is Electric Dipole?

An electric dipole is defined as a couple of opposite charges q and –q separated by a distance d.

What is Dipole Moment?

) of an electric dipole is defined as the product of the magnitude of one of the charges and the vector distance from negative to positive charge.

Electric field due to an electric dipole:

(a) At any point on the axial line:

(b) At a point on the equatorial line (perpendicular bisector): 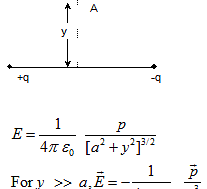 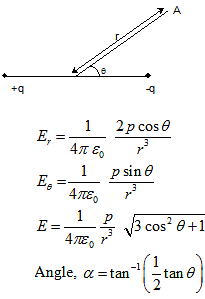 ) acting on an electric dipole in a uniform electric field (E):

What is Electro-Static Potential?

Electric potential, at any point, is defined as the negative line integral of the electric field from infinity to that point along any path.

The potential difference, between any two points, in an electric field, is defined as the work done in taking a unit positive charge from one point to the other against the electric field.WAB = q [VA-VB]So, V = [VA-VB] = W/q

Potential due to a point charge

Potential at a point due to several charges

Potential due to charged spherical shell

Potential due to a uniformly charged non-conducting sphere

Potential at any point due to an electric dipole:

If n drops coalesce to form one drop, then,

Electric potential energy U or work done of the system W of a three-particle system having charge q1, q2 and q3

Question for Revision Notes: Electrostatic
Try yourself:In bringing an electron towards another electron, the electrostatic potential energy of the system:
Explanation

The electron has negative charge. When an electron is bringing towards another electron, then due to same negative charge repulsive force is produced between them. So, to bring them closer a work is done against this repulsive force. This work is stored in the form of electrostatic potential energy. Thus, electrostatic potential energy of system increases.

Potential energy of an electric dipole, in an electrostatic field, is defined as the work done in rotating the dipole from zero energy position to the desired position in the electric field.

The kinetic energy of a charged particle moving through a potential difference:

Conductors are those substances through which electric charge flow easily.

The capacity of a conductor is defined as the ratio between the charge of the conductor to its potential.C = Q/V

The capacity of an isolated spherical conductor:

A capacitor or a condenser is an arrangement that provides a larger capacity in a smaller space.

Cmed = Kε0A/dHere, A is the common area of the two plates and d is the distance between the plates.

C = ε0A/[d-t+(t/K)]Here d is the separation between the plates, t is the thickness of the dielectric slab, A is the area and K is the dielectric constant of the material of the slab.If the space is completely filled with dielectric medium (t=d), then, C = ε0KA/ d

Increase in capacity, ΔC = 4π ε0bIt signifies, by connecting the inner sphere to earth and charging the outer one we get an additional capacity equal to the capacity of the outer sphere.

This signifies the energy density of a capacitor is independent of the area of plates and the distance between them so, the value of E does not change.

Energy stored in a group of capacitors:

Force of attraction between plates of a charged capacitor:

Force on a dielectric in a capacitor:

Charging of a capacitor

Discharging of a capacitor