(A) On the basis of amount of yolk

(i) Alecithal - In this type of egg, yolk is negligible. Ex. Human egg.

(iii) Mesolecithal Eggs :- In this type of egg, the amount of yolk is moderate i.e. medium, neither more nor less.

(iv) Polylecithal or Macrolecithal or Megalecithal eggs :- Eggs are with large amount of yolk. e.g.

(B) On the basis of destribution of yolk :

(i) Isolecithal or homolecithal eggs : The yolk is evenly or homogenously distributed in these eggs. eg. : micro, oligo or alecithal eggs.

(iii) Centrolecithal eggs : Megalecithal eggs where the enormous amount of yolk is located in the centre and cytoplasm is in the form of superficial layer around the yolk. eg. : Insects egg.

(C) Classification of Eggs on the basis of Shell :-

(i) Cleidoic eggs :- eggs surrounded by a hard shell are known as cleidoic eggs. These eggs are found in those animals which have a terrestrial mode of life or which lay eggs on land.

These eggs have more amount of yolk. These are adaptations to terrestrial mode of life. Shell prevents the egg from dessication. e.g. :- eggs of "Reptiles", "Birds", "Terrestrial Insects " and "Prototherians".

STRUCTURE OF AN OOCYTE

The nuclues of egg is also called germinal vesicle.

Oocyte is surrounded by membranes termed as the egg-membranes.

Oocyte / Ovum along with the egg-membrane are termed as the egg.

Classification of egg - membranes :-On the basis of origin, egg- membranes are of 3 types :-

(1) Primary egg membrane :This membrane is secreted by the oocyte  itself. eg. Vitelline membrane, Zona Pellucida (mammals), Zona radiata (Shark and Some amphibians)

(3) Tertiary egg membrane : This is present outside the primary egg membrane. It is either secreted by the uterus or the oviduct. (eg. Jelly coat, Shell & Shell membrane)

(i) To provide protection

(iii) To provide buoyancy to the amphibian eggs

Eggs of insects are megalecithal or polylecithal In them yolk is present in the centre, so the eggs are also centrolecithal.

The sperm enters the egg through micropyle because on the head of insect sperm acrosome is absent.

The Cytoplasm here is found in two parts :

(a) Central cytoplasm :-It is present in a very small amount in the center of the egg. Egg nucleus is located in it.

(b) Peripheral Cytoplasm :- It is present in a very small amount along the periphery of the egg. 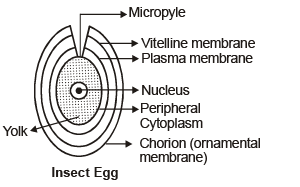 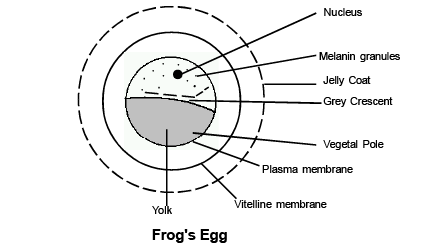 Two types of egg membranes are found in frogs egg :

(i) Vitelline membrane : This is primary egg membrane which is secreted by the ovum around itself.

(ii) Jelly coat : This is tertiary egg membrane, secreted by oviduct. Jelly coat has air bubbles trapped in it due to which it floats an water. This group of frogs egg is called spawn, Jelly coat is bitter in taste so enemies do not eat it.

Internal part of the egg is divided in two parts :

(i) Animal pole : This part has cytoplasm, egg nucleus in also located in this part. In the cytoplasm melanin granules are found which prevent the egg from harmfull radiations. They also help in protection of egg by camouflage.

A sperm always enters into the ovum at some point in animal hemisphere. This point is normally other than the animal pole itself.

(ii) Vegetal pole : yolk is concentrated in this part of egg.

Yolk is of 2 types i.e. yellow yolk and white yolk.

Both the types of yolk are arranged in  alternate and concentric layers.

Pander was the scientist , who discovered the 3 germinal layers i.e. Ectoderm Mesoderm and Endoderm in chick - egg. 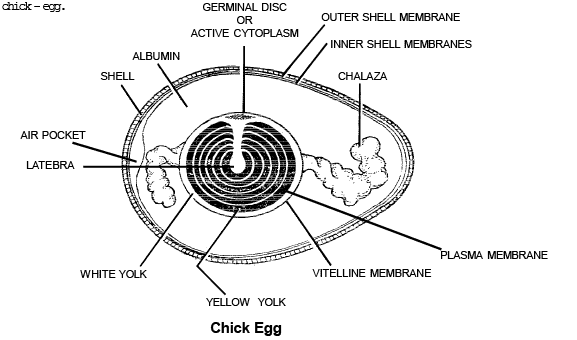 Around the egg, a porous shell of CaCO3 is present which is secreted by the cells of posterio